Headlines
Redwan Rahman graduates from FilmdomThe local government minister has instructed to cut the road if necessary to remove the waterRequest to withdraw closure shop at night till EIDThe days of the Western monolithic world are over: PutinLeaders of Germany, France, and Italy in Kyiv to express solidarity‘Presidents of two countries call and pressurized Mbappé’Two U.S. citizens are thought to be missing or taken prisoner in UkraineCOVID: The technical committee suggested lifting some restrictionsPetrol prices hit record highs in the USCanada wants a stern warning against cigarettesThe task force to protect the mountains, demanded the formation of a speedy trial tribunalDepot fire: CID tries to find the cause on CCTVRussian passports are being issued in occupied UkraineFire on Parabat Express: Railroad to Sylhet is normal after 4 hoursAnother 24 children died in Mariupol, Ukraine said
Home Country Rabab Fatima is the UN Under-Secretary-General
Facebook
Twitter
WhatsApp
Print 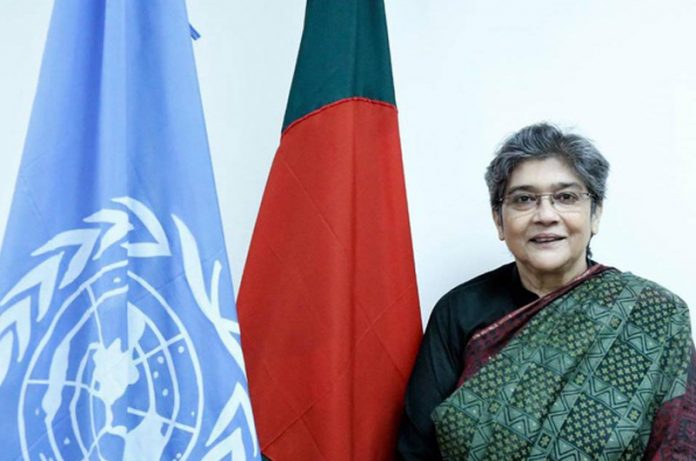 Secretary-General António Guterres gave him the job on Thursday, according to a statement posted on the UN website.

According to the Office of the Secretary-General, Fatima will be the Senior Representative of the Least Developed Countries (LDCs), Landlocked Developing Countries (LLDCs), and Developing Small Island States (SIDS).

As Senior Representative of UN-OHRLLS, he replaces Rotter in Courtney, Jamaica.

Earlier, another Bangladeshi diplomat, Anwar-ul Karim Chowdhury, was appointed to the UN in 2002.

Rabab Fatima, a professional diplomat, has been working nationally and internationally for over 30 years in bilateral and multilateral diplomacy, policy formulation, advocacy, and project planning and implementation.

As the Under-Secretary-General, he will be the highest-ranking Bangladeshi citizen in the UN structure.

Ambassador Fatima responded, “I am grateful to the Prime Minister. He gave me this opportunity. He has appointed me as the Permanent Representative of Bangladesh to the United Nations with confidence and trust in me.

“I am grateful to the Secretary-General of the United Nations. I would like to reflect on the deep trust he has placed in me by appointing me as the Senior Representative of the Least Developed Countries, Developing Countries, and Developing Small Island States.

Rabab Fatima will step down as Permanent Representative of Bangladesh before taking over as Under-Secretary-General. The Ministry of Foreign Affairs of Bangladesh has not yet announced who is new to the post in New York.

Rabab Fatima is the Permanent Representative of Bangladesh to the President of the United Nations Peacebuilding Commission, President of the UN Women Executive Board, and Vice-Chair of the 7th UN General Assembly.

He has also served as co-chair of the LDC-5 Preparatory Committee, President of the UNICEF Executive Board, and Vice President of UNDP, UNFPA, and UNOPS.

Rabab Fatima, who joined the Foreign Office in 1989, has served in various capacities as the Director-General of the Ministry of Foreign Affairs, as well as the Permanent Mission of Bangladesh to the United Nations in New York and Geneva, and the Bangladesh Mission in Calcutta and Beijing.

Head of the Human Rights Department at the Commonwealth Secretariat in London; He is also the Regional Representative for South Asia in the International Organization for Migration (IOM) and has served as the Regional Advisor on Climate Change and Migration in South and Southwest Asia.

Rabab Fatima holds a master’s degree in international relations and diplomacy from the Fletcher School of Law and Diplomacy at Tufts University in the United States, and a bachelor’s degree in sociology from the University of Canberra in Australia.

In her personal life, Rabab Fatima is the mother of one daughter. Her husband Kazi Imtiaz Hossain is also a professional diplomat. He is currently the Chairman of the Bangladesh Institute of International and Strategic Studies (BISS).