Headlines
Redwan Rahman graduates from FilmdomThe local government minister has instructed to cut the road if necessary to remove the waterRequest to withdraw closure shop at night till EIDThe days of the Western monolithic world are over: PutinLeaders of Germany, France, and Italy in Kyiv to express solidarity‘Presidents of two countries call and pressurized Mbappé’Two U.S. citizens are thought to be missing or taken prisoner in UkraineCOVID: The technical committee suggested lifting some restrictionsPetrol prices hit record highs in the USCanada wants a stern warning against cigarettesThe task force to protect the mountains, demanded the formation of a speedy trial tribunalDepot fire: CID tries to find the cause on CCTVRussian passports are being issued in occupied UkraineFire on Parabat Express: Railroad to Sylhet is normal after 4 hoursAnother 24 children died in Mariupol, Ukraine said
Home Sports Real beat City to make it to the final by returning to...
Facebook
Twitter
WhatsApp
Print 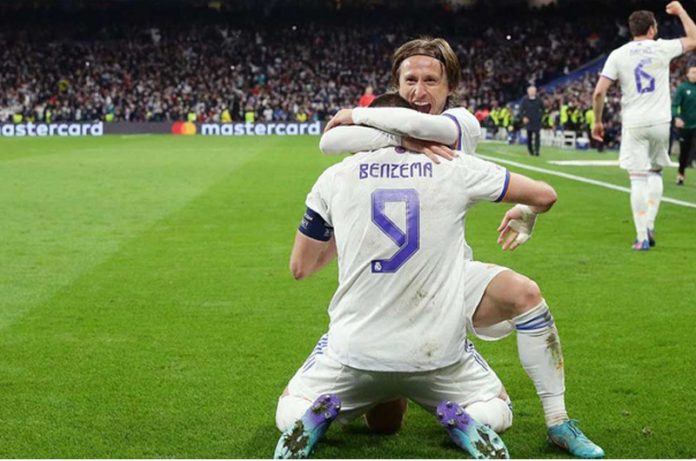 Sports Desk: Another defeat was teary-eyed. The moment of farewell was approaching. However, this Real Madrid is not the end before the end! Rodrigo kept the team’s hopes alive by scoring two goals in two consecutive minutes at the last minute. The game rolled into extra time. Karim Benzema saw the net there. Carlo Ancelotti’s side reached the Champions League final, shattering Manchester City’s hopes by writing another remarkable return to the courtyard.

In the second leg of the semi-final at the Santiago Bernabeu on Wednesday night, Manchester City was leading the final with a 1-0 goal in the 79th minute and 5-3 goals in both legs. However, in an incredible turn, Real won the match 3-1. A 6-5 goal lead ensured a ticket to the final in Paris.

Another English club, Liverpool, will face a record 13-time Champions League champions on May 29 in the title race.

City won the first leg 4-3 in a thrilling seven-goal battle at the Etihad Stadium. As the gap was not big, there was a possibility for Real to turn around.

However, in the first 89 minutes, the hosts had no shots on target. Then their great return. All in all, 5 of Real’s 14 shots were aimed for goals in the match. The city had 10 goals in 15 shots. However, they had to leave the field with the pain of defeat.

Real got their first chance to win the La Liga title in the fifth minute. Dani Carvajal’s cross jumped into the D-box and Benzema’s head flew over the crossbar. After Casimiro fouled Kevin de Bruyne in the ninth minute, Luca Madrich and Emerick Laporte were shown yellow cards.

In the 18th minute, Vinicius Jr. got the ball on the leg of Ruben Dias who was going to challenge Benzema in the D-box. However, the Brazilian forward could not aim the volley from the corner of the six-yard box.

The city got the first good chance after two minutes. Thibaut Courtois returned Bernardo Silver’s shot from close range to keep the net intact. In the 38th minute, the Belgian goalkeeper also blocked Phil Foden’s powerful shot from outside the D-box.

In the 43rd minute, Benzema entered the D-box with the ball through Ferland Mandir and blew it one-on-one. Although the referee blows the whistle, offside.

Vinicius got a chance at the beginning of the second half. He struck out incredibly from the right side as Carvajal extended. Liceman, however, raised the flag offside.

On the contrary, in the 73rd minute, the way for Real to turn around became difficult. City went ahead with a great attack. Holding the ball from near midfield, Silva entered the box and extended it to the right. Riyad Mahrez sent the ball into the net with a left-footed corner shot.

The gap could have been doubled in the 87th minute. Jack Grillish’s effort from the left side turned Ferland Mandi from the goal line.

That’s when Real began to turn around. In the 90th minute, Rodrigo equalized with a kick from near Benzema’s cross. The Brazilian, who replaced Tony Cruz in the second half, sent the ball back into the net in the first minute of added time. Marco Asensio was unable to head properly through Carvajal’s cross, and the unprotected Rodrigo behind him had a golden opportunity.

The scoreline is 5-5 with two legs. At the added time, the two teams have a chance to finish the match. Ederson stopped Rodrigo’s hat-trick. The ball flew unprotected, Foden in the D-box.

Shortly after the match rolled into extra time, the ball was in the net again! Benzema put Real ahead with a successful spot-kick in the 95th minute. Real got a penalty for fouling City’s Dias in the D-box.

City got a chance to take the match in a tiebreaker. However, Foden’s head was returned by Cortoya, who had been busy throughout the match.

The knockout stage match at the Bernabeu in the Champions League this time means that the story of Real’s return is inevitable. In the second leg against PSG in the last 16, they were trailing 2-0 with two legs till 60 minutes. Then they put Benzema’s great hat-trick in the next step.

After falling 3-1 at home to Chelsea in the last eight, Real fell behind 3-0 at one stage. The fear of farewell awakens again. Just then, they turned around. After paying two goals, he put his foot in the last four.

This time they wrote another story of coming back against City.

In 2018, Real reached the final of the Champions League again. They celebrated the title by losing to Liverpool in the final of the service. Will the English team be able to take revenge this time? Or will the record of the most successful team in Spain be richer? Time will tell!