Headlines
Redwan Rahman graduates from FilmdomThe local government minister has instructed to cut the road if necessary to remove the waterRequest to withdraw closure shop at night till EIDThe days of the Western monolithic world are over: PutinLeaders of Germany, France, and Italy in Kyiv to express solidarity‘Presidents of two countries call and pressurized Mbappé’Two U.S. citizens are thought to be missing or taken prisoner in UkraineCOVID: The technical committee suggested lifting some restrictionsPetrol prices hit record highs in the USCanada wants a stern warning against cigarettesThe task force to protect the mountains, demanded the formation of a speedy trial tribunalDepot fire: CID tries to find the cause on CCTVRussian passports are being issued in occupied UkraineFire on Parabat Express: Railroad to Sylhet is normal after 4 hoursAnother 24 children died in Mariupol, Ukraine said
Home Entertainment Redwan Rahman graduates from Filmdom
Facebook
Twitter
WhatsApp
Print

Redwan is one of the most popular and busy actors of this time, who stepped into the media as a host and a model. He made his debut as an anchor in a magazine show, Movie time, which gave him mass popularity. He has been picked as a model by celebrated actor Afzal Hossain for a TV commercial on beautiful Bangladesh. Since then, the talented model-actor has occupied a strong position in showbiz. Currently, Redwan Rahman is all set to debut on the silver screen with an action romantic film game, directed by Razu Chowdhury. In an interview with Beaconbangla.com Redwan talked about his recent ventures: 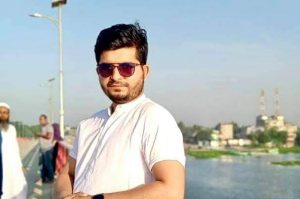 *What are you up to nowadays?
I am working on Razu Chowdhury’s first film game. As it is my silver screen debut, I am giving my all concentration towards the film.

*Why you have chosen this film as your debut on the silver screen?

I found this film to be appropriate for my debut. I also love the story and every detail of the role. I am lucky that I am starting my journey on the silver screen with the same director whose telefilm was my first acting debut.

Furthermore, have a good understanding of Razu Chowdhury. I started my career with his telefilm Jolpoddo. We also have a strong connection, I was always confident about Razu’s ability to deliver good entertainment pieces to the audience. Another point is, I trust that he is introducing this role specifically for me because it feels that this role is tailor-made to suit my abilities.

*How did you get yourself ready for the silver screen debut?

I have done huge homework about working on the silver screen. I learned how to be a dancer, coordinate as an action hero, and also did a lot of work to improve my acting. From the very begging of my career, everyone helped me a lot.

At first, I thought it was not my cup of tea. Being a host was enough for me. But, Afzal Hossain just played the lead role in launching my career, and he is my mentor. He taught me every small detail of the trade. I have learned so many things from him. Celebrated and noted actor Asaduzzaman Noor also inspired me.

*Do you have any plans to stick to modeling?

I won’t stop modeling. In my entire career, I have done only eight advertisements, and every single one succeeded in the market.

*What is your current goal?

I don’t have any plans right now except for this film. A movie reel keeps a performance alive for years, with repeated views by the audience. I want my performance to leave a good impression.

According to Redwan Rahman, hard work and determination never go unrewarded, and he believes that he is a director’s actor.