Headlines
Redwan Rahman graduates from FilmdomThe local government minister has instructed to cut the road if necessary to remove the waterRequest to withdraw closure shop at night till EIDThe days of the Western monolithic world are over: PutinLeaders of Germany, France, and Italy in Kyiv to express solidarity‘Presidents of two countries call and pressurized Mbappé’Two U.S. citizens are thought to be missing or taken prisoner in UkraineCOVID: The technical committee suggested lifting some restrictionsPetrol prices hit record highs in the USCanada wants a stern warning against cigarettesThe task force to protect the mountains, demanded the formation of a speedy trial tribunalDepot fire: CID tries to find the cause on CCTVRussian passports are being issued in occupied UkraineFire on Parabat Express: Railroad to Sylhet is normal after 4 hoursAnother 24 children died in Mariupol, Ukraine said
Home Country Register before next year, then the online portal
Facebook
Twitter
WhatsApp
Print 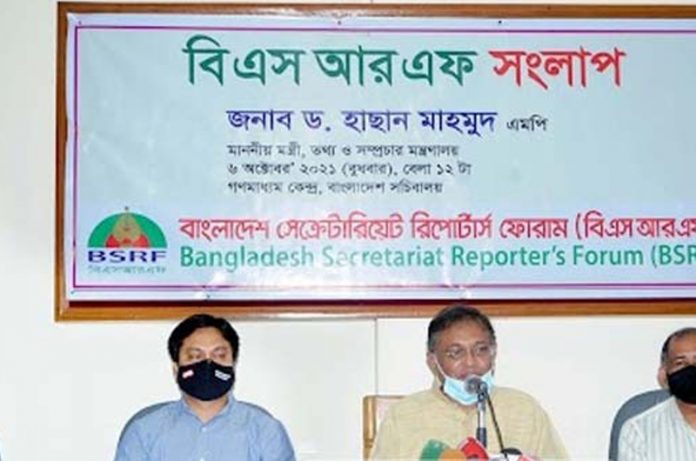 Senior Reporter: From next year, registration will have to be done before the online news portal is published.

Information and Broadcasting Minister Hasan Mahmud said the move was to bring order through online news.

The minister made the remarks at a ‘BSRF Dialogue’ organized by the Bangladesh Secretariat Reporters Forum (BSRF) at the Secretariat on Wednesday.

Numerous online newspapers have been published in the last decade and a half after bdnews24.com showed the way.

The government took the initiative to register this online news medium in 2020.

After giving permission to more than two and a half hundred published online newspapers to register, the information minister said that the process of registering before publishing will be introduced now.

“So we will take the online registration process to a fair level. As we have discussed, registration will have to be done before any online debut from next year. Then there will be a discipline. ”

Regarding the online news media, he said, “For the time being, we have started registering because there are many online media outlets. We started the registration process much later. ”

IP TV is off when the news is broadcast

Information Minister Hasan Mahmud has said that the IP TVs that are broadcasting news without complying with the government’s ban will be shut down.

“The IP TV that broadcasts the news will immediately take steps to stop its activities,” he said.

He also insisted on following the rules including registration in the management of IP TV.

Hassan said, “IP TV is a reality all over the world, it is new media. It is not advisable to close it. But IP TV, like a frog’s umbrella, it can’t be. That is why we have started the IP TV registration process. Those who really want to work will be given registration. ”

He said that registration will not be given if the name of an IP TV matches the name of the television.

The Information Minister further said, “If there is any program or press conference, it should be understood at a glance which is TV and which is IP TV. We have to bring a discipline there too. The same kind of boom (microphone) so that can not use. At least IP TV should be written there. ”

The information and broadcasting minister said that the foreign channels will start broadcasting in the country only when they send clean feeds.

Only Bangladeshi operators have stopped broadcasting foreign television channels that have been airing advertisements on Fridays in compliance with government directives. Cleanfeed means you can’t have any ads

The information minister said, “Only the operators are telling me that the foreign televisions will now send clean feeds. I said, if we send Clyde feed, we will run, why didn’t you send it for so many days? They are responsible for sending clean feed. Why don’t they send us to other countries? ”

“Broadcasting will start as soon as it is sent. I am not inclined to give any time before. Many channels are broadcasting with clean feeds. ”

“Those who can launch the channel with clean feed will launch it. Those who can’t will not be able to launch it,” he said. You will suddenly see the benefits. This has been done in the interest of the country. ”

Complaining that only the operators do not pay tax to the government from their income, the Information Minister said, “From November 1, it will have to be digitalized through broadcasting in Dhaka and Chittagong. They have accepted it. When only the operating system is digitized, it will not be possible to cheat. ”

The decision to implement additional fees for advertising with foreign artists will be implemented very soon, the information minister said, adding that if this is done, all the artists and advertising companies in the country will benefit.