Headlines
Redwan Rahman graduates from FilmdomThe local government minister has instructed to cut the road if necessary to remove the waterRequest to withdraw closure shop at night till EIDThe days of the Western monolithic world are over: PutinLeaders of Germany, France, and Italy in Kyiv to express solidarity‘Presidents of two countries call and pressurized Mbappé’Two U.S. citizens are thought to be missing or taken prisoner in UkraineCOVID: The technical committee suggested lifting some restrictionsPetrol prices hit record highs in the USCanada wants a stern warning against cigarettesThe task force to protect the mountains, demanded the formation of a speedy trial tribunalDepot fire: CID tries to find the cause on CCTVRussian passports are being issued in occupied UkraineFire on Parabat Express: Railroad to Sylhet is normal after 4 hoursAnother 24 children died in Mariupol, Ukraine said
Home Country Samrat is in prison again
Facebook
Twitter
WhatsApp
Print 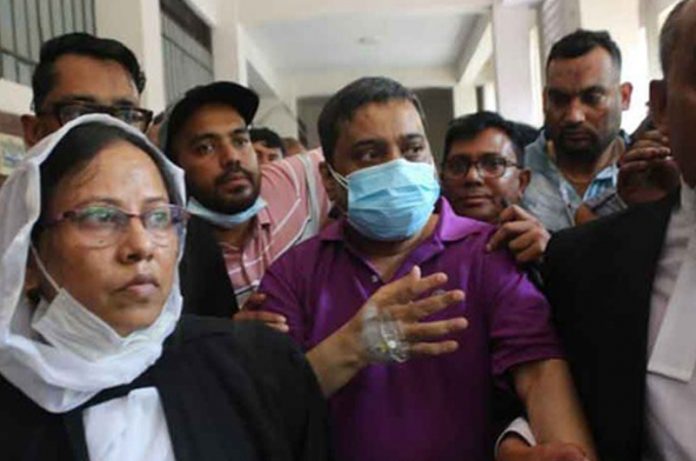 Court Reporter: Ismail Hossain Chowdhury Samrat, the expelled president of Dhaka Metropolitan South Juba League, has to return to jail 13 days after his release on bail.

He surrendered to the Dhaka Judge’s Court on Tuesday and sought bail again as his bail was canceled in a case of illegal acquisition of assets and money laundering.

Dhaka Sixth Special Judge, Al Asad. Asifuzzaman ordered the emperor to be sent to jail on June 9 for a bail hearing.

Lawyer Ehsanul Haque Samaji was present at the hearing on behalf of the emperor. On the other hand, Mosharraf Hossain Kajal was in favor of the ACC.

Samrat came to the court from Bangabandhu Sheikh Mujib Medical University Hospital in an ambulance at around 11:30 pm to surrender. Earlier, hundreds of supporters appeared outside the court. They chanted various slogans demanding the release of the emperor.

On May 11, the same court granted bail to the emperor on three conditions. But at the request of the ACC on May 18 Justice. Nazrul Islam Talukdar and Justice Kazi Mohammad. The High Court bench of Izarul Haque Akand dismissed it. He was also ordered to surrender to the court within seven days.

The emperor, who was expelled from the South Juba League, went into hiding on September 18, 2019, when it came to light that an illegal casino was operating in the RAB operation in Club para, Motijheel, Dhaka.

On 7 October, the RAB arrested the emperor and his ally Enamul Haque Arman from Chauddagram in Comilla. The emperor was accompanied by a raid on his office at the Bhuiyan Trade Center in Kakrail that afternoon.

At the end of the five-hour operation, a foreign pistol with bullets, 1,160 yaba, 19 bottles of foreign liquor, two kangaroo skins, and electrical equipment for “torture” were recovered, the RAB said.

The mobile court immediately sentenced the emperor to six months in prison under the Wildlife (Conservation) Act for finding a kangaroo skin in his office. Besides, two cases were registered in Dhaka’s Ramna police station under the Narcotics Control and Arms Act. Later, a case was filed against the emperor on charges of money laundering and illegal acquisition of wealth.

He was granted bail in the four cases of arms, money laundering, drugs, and illicit assets between April 10 and May 11 this year. He was released after 31 months.

Before his release, the emperor was under the care of Bangabandhu Sheikh Mujibur Rahman Medical University for about a year and a half. When the bail papers reached the hospital on the afternoon of May 11, the formalities of his release were completed there. Even after his release, he was admitted to the CCU in the ‘D’ block of the hospital, citing illness.

The director of the hospital, Brigadier General. Nazrul Islam Khan told a news conference the next day that they were in favor of keeping the emperor in hospital with a “chronic heart disease”. However, if the family wants, they can take him to another hospital or abroad for better treatment.

But two weeks later, the emperor had to surrender to the court and go to prison.