Headlines
The local government minister has instructed to cut the road if necessary to remove the waterRequest to withdraw closure shop at night till EIDThe days of the Western monolithic world are over: PutinLeaders of Germany, France, and Italy in Kyiv to express solidarity‘Presidents of two countries call and pressurized Mbappé’Two U.S. citizens are thought to be missing or taken prisoner in UkraineCOVID: The technical committee suggested lifting some restrictionsPetrol prices hit record highs in the USCanada wants a stern warning against cigarettesThe task force to protect the mountains, demanded the formation of a speedy trial tribunalDepot fire: CID tries to find the cause on CCTVRussian passports are being issued in occupied UkraineFire on Parabat Express: Railroad to Sylhet is normal after 4 hoursAnother 24 children died in Mariupol, Ukraine saidBelayet, who is in his fifties, has been given a good admission test against young
Home Entertainment Shah Rukh-Attlee’s movie is being made under the inspiration of ‘Money Heist’?
Facebook
Twitter
WhatsApp
Print 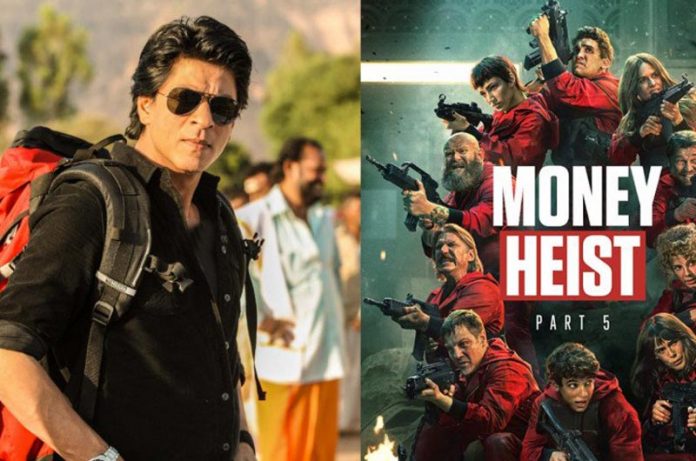 Entertainment Desk: What was rumored for so long is now public. Bollywood King Shah Rukh Khan has started shooting for an action movie directed by Tamil director Attlee Kumar on Friday. The shooting of the movie was captured in the Pune Metrorail area of ​​India on the cameras of netizens including the media.

This time, the unnamed Shah Rukh Khan-Attlee movie is being made on the inspiration of Netflix’s popular ‘Money High’ series.

A source told Bollywood Hangama that the director himself has scripted the movie with various plots rich in all commercial arrangements. The team of Shah Rukh’s production company was involved there. One of the sub-plots of the movie is inspired by ‘Money High’. Big bank robberies will happen in movies. Many of the rest of the characters will be members of the bandits.

Bollywood Hungama reports that Netflix had earlier offered Shah Rukh Khan’s production company Red Chillies Entertainment to make ‘Money High’ in Hindi. However, the proposal was not satisfactory and the work was not done.

Shah Rukh Khan will be seen in a dual role in the movie. The second is a member of the special intelligence team. Sunil Grover is playing an important role in the movie; However, the details of his character have been kept secret.

Nayantara, the famous actress of the southern movie ‘Lady Superstar’, will be starring opposite Shah Rukh Khan for the first time in this movie. The movie also stars Sania Malhotra and southern star Priya Monir.

Rumor has it, moviegoers have plans to shoot for a total of 180 days. The music of the movie will be directed by AR Rahman. The teaser of the movie has already been completed; The official announcement will come very soon.

Shah Rukh Khan’s production company Red Chillies Entertainment Attlee is producing the movie. Although no official announcement has been made yet.