Headlines
Redwan Rahman graduates from FilmdomThe local government minister has instructed to cut the road if necessary to remove the waterRequest to withdraw closure shop at night till EIDThe days of the Western monolithic world are over: PutinLeaders of Germany, France, and Italy in Kyiv to express solidarity‘Presidents of two countries call and pressurized Mbappé’Two U.S. citizens are thought to be missing or taken prisoner in UkraineCOVID: The technical committee suggested lifting some restrictionsPetrol prices hit record highs in the USCanada wants a stern warning against cigarettesThe task force to protect the mountains, demanded the formation of a speedy trial tribunalDepot fire: CID tries to find the cause on CCTVRussian passports are being issued in occupied UkraineFire on Parabat Express: Railroad to Sylhet is normal after 4 hoursAnother 24 children died in Mariupol, Ukraine said
Home More Politics Sheikh Hasina is now the pride of the nation: State Minister for...
Facebook
Twitter
WhatsApp
Print 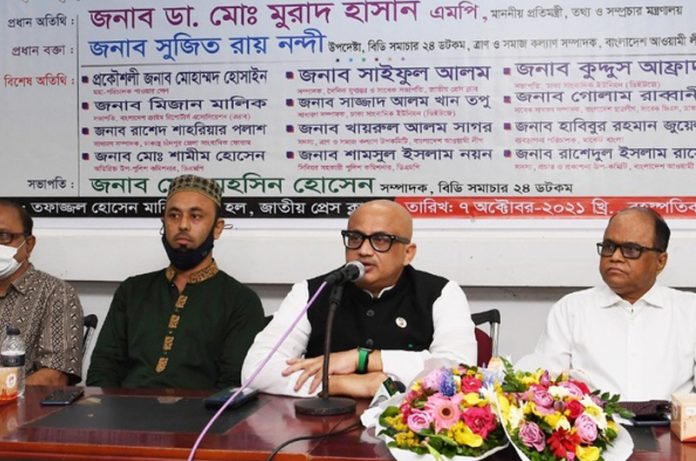 He said, “Every country in the world has many places to be proud of. When someone on foreign soil asks, what do you have to be proud of? Hon’ble Prime Minister Sheikh Hasina, daughter of Bangabandhu, is proud of the Bengali nation.

“The alternative word for independent Bangladesh is Bangabandhu Sheikh Mujibur Rahman, the father of the greatest Bengali nation of all time. If any ordinary person of Bangladesh is asked now, he will also say that Sheikh Hasina is their pride. ”

The state minister said this at the anniversary function of an online news portal at the National Press Club on Thursday.

Murad said the development and expansion of the online portal were possible under the direction of the Prime Minister, who said the government believed in freedom of speech.

He said, “Young people are the strength to take Digital Bangladesh to a unique height. The online platform will play a leading role in providing accurate information services to the nation by ensuring transparency and accountability in the hands of today’s youth. ”

Expressing gratitude to the media personnel for fulfilling their responsibilities despite the coronavirus infection, the state minister said, “Bangabandhu’s daughter Sheikh Hasina will do everything for the welfare of the media. It is possible for him, he has given 13 and a half crore rupees for the welfare of journalists. ”