Headlines
Redwan Rahman graduates from FilmdomThe local government minister has instructed to cut the road if necessary to remove the waterRequest to withdraw closure shop at night till EIDThe days of the Western monolithic world are over: PutinLeaders of Germany, France, and Italy in Kyiv to express solidarity‘Presidents of two countries call and pressurized Mbappé’Two U.S. citizens are thought to be missing or taken prisoner in UkraineCOVID: The technical committee suggested lifting some restrictionsPetrol prices hit record highs in the USCanada wants a stern warning against cigarettesThe task force to protect the mountains, demanded the formation of a speedy trial tribunalDepot fire: CID tries to find the cause on CCTVRussian passports are being issued in occupied UkraineFire on Parabat Express: Railroad to Sylhet is normal after 4 hoursAnother 24 children died in Mariupol, Ukraine said
Home Headlines Shirin: Name bought with life – ‘Journalist’
Facebook
Twitter
WhatsApp
Print 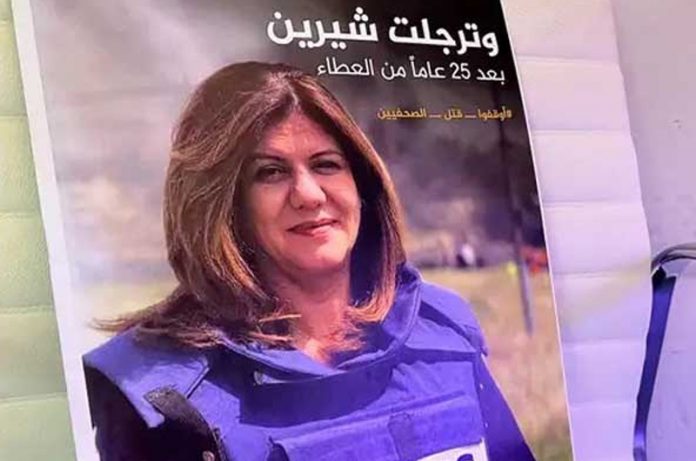 Md. Ashraful Islam: Shirin Abu Akleh is a household name in Arabia, literally. War or peace, he has always been the voice of the region. His quiet but arrogant presence inside the country or beyond its borders, from the sitting room to the battle camp, kept his face everywhere.

For more than two decades, she has been covering Palestinian issues and the Middle East. The 51-year-old journalist was shot dead by Israeli forces in the West Bank town of Jenin on May 11.

Shirin, a senior Al Jazeera journalist of Palestinian descent, has analyzed how the BBC made history in journalism in the region.

Beginning in 1997, Shirin made her own history in the years following the launch of the Arabic television channel Al-Jazeera.

Shirin was the driving force behind a generation of Arab women. She was the first woman journalist to be seen on a television screen, and many people thought of making her look like an ‘icon’.

Shirin, who was standing with other journalists on the day of the incident on May 11, had “Press” written on her clothes. Shirin died. Al Jazeera claims that this is a “cold-blooded killing” by Israeli forces.

After the incident, the Palestinians, who considered Shirin as their relative, erupted in grief and anger. News headlines have spread on social media – ‘Trailblazer, Symbol, Martyr’.

The Palestinians thought Shirin was their own man, they thought he was “knowing them, talking to them.”

A huge billboard with his picture has been erected in Ramallah on the West Bank. Many are remembering him by lighting candles.

But above all, Shirin has earned a title with her work and life, which is ‘Journalist’.

Lina R. Shafin, a colleague of Shirin’s, said she first heard the news of her death from another colleague, Shaima Khalil’s tweet.

‘Oh! What terrible news! I and millions of people have been watching Shirin’s news for years, “said Lina.

“Many women in the area have grown up thinking of themselves as sweet by holding a hairbrush in front of a mirror (thinking of a microphone),” she said.

According to Lena, Shirin was able to build her popularity among Israelis as well.

In 1993, Shirin was the voice of war and peace in the context of the original agreement in the Arab world. The Palestinians thought the journalist was part of them.

Many Palestinians believe that Shirin’s self-confidence and smiling face set her apart from everyone else.

Many Palestinians remember Shirin, especially during the liberation movement in 2000, for reporting on large-scale Israeli attacks on major West Bank cities.

Shirin, who lost his life in the news of the Israeli operation in that northern city, has now become the biggest news. The death that shook the whole world beyond Palestine, the Arab world, is overshadowed by mourning.

Shirin’s blue coffin in bold white “press” on the wooden coffin of his body is seen by his colleagues as a reminder of the strength and pain of journalists covering the Israeli-Palestinian conflict and other wars.

As Arab journalist and writer Marwan Bishara writes, Shirin was calm and calm even in horrific situations, even in bloody places.

Many people think that much such news will be lost without Shirin now.