Headlines
Redwan Rahman graduates from FilmdomThe local government minister has instructed to cut the road if necessary to remove the waterRequest to withdraw closure shop at night till EIDThe days of the Western monolithic world are over: PutinLeaders of Germany, France, and Italy in Kyiv to express solidarity‘Presidents of two countries call and pressurized Mbappé’Two U.S. citizens are thought to be missing or taken prisoner in UkraineCOVID: The technical committee suggested lifting some restrictionsPetrol prices hit record highs in the USCanada wants a stern warning against cigarettesThe task force to protect the mountains, demanded the formation of a speedy trial tribunalDepot fire: CID tries to find the cause on CCTVRussian passports are being issued in occupied UkraineFire on Parabat Express: Railroad to Sylhet is normal after 4 hoursAnother 24 children died in Mariupol, Ukraine said
Home Headlines Sri Lanka is burning in protest
Facebook
Twitter
WhatsApp
Print 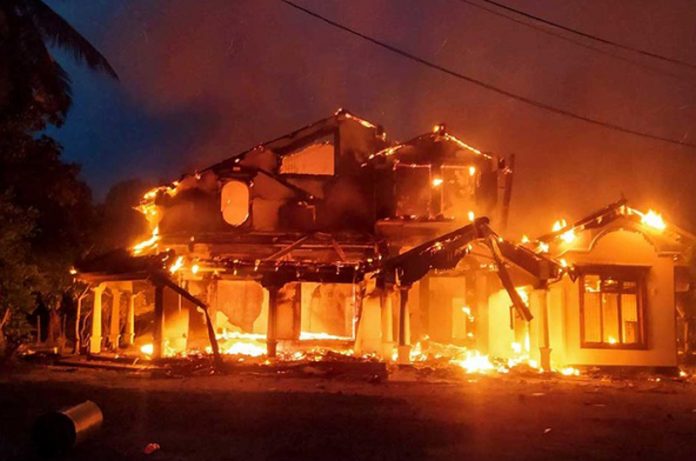 Md. Ashraful Islam: Prime Minister Rajapaksa has been forced to resign in the wake of the economic crisis in Sri Lanka. However, the anger did not abate.

An MP was also killed in the violence. He turned his shotgun on himself when apprehended by a police officer on the porch of the house where the shootings took place.

The BBC reports that five people, including the lawmaker, were killed and about 200 were injured in the violence in Colombo.

Mahinda has dropped several family members from the cabinet in the last few months in public protests. But the protests did not stop there.

Despite rumors of Mahinda’s resignation after the whole country was paralyzed by an unprecedented strike on Sunday at the call of various labor organizations, there was no definite news.

Amid thousands of people protesting in the capital Colombo on Monday, the Sri Lankan newspaper Financial Times reported that Prime Minister Mahinda had sent his resignation letter to the President.

According to the Sri Lankan Daily Mirror, in a special meeting on Friday, President Gotabaya asked his elder brother Mahinda to resign to resolve the political crisis in the country, and he responded within days.

Following the resignation of the Prime Minister, President Gotabaya is expected to invite all political parties in parliament to form an all-party cabinet.

Earlier, the opposition SJB party confirmed that their leader Sajith Premadasa would not be taking over as prime minister in a possible interim government.

News of the prime minister’s resignation comes shortly after he was attacked by supporters of the ruling party at a key protest rally in Colombo.

They broke through police barricades and hurled sticks and iron pipes at protesters. Police used tear gas and water cannons to disperse the attackers.

According to the BBC, a curfew has been imposed across the country following the attack on supporters of the ruling party.

However, after the curfew was imposed till Wednesday, the situation is reported to be more complicated.

According to The Times of India, protesters set fire to Rajapaksa’s ancestral home in the northwestern town of Kurunagela. Former Minister Johnston Fernando has also been set on fire in the city.

According to NDTV, protesters set fire to the houses of two MPs as well as three former ministers.

In the video, flames were seen rising from the burning house after MP Sanath Nishantha’s house was set on fire.

Another video shows protesters setting fire to the homes and vehicles of politicians from the Sri Lankan political party SLPP.

Outraged crowds demanded the resignation of President Gotabaya Rajapaksa, but he refused to step down.

The BBC writes that the people of Sri Lanka have started protesting as the economic crisis has made people’s lives difficult.

Inflation in the country has risen by more than 30 percent in the past year. The food and fuel crisis has intensified.

The crisis in Sri Lanka became apparent when the Ukraine war broke out after tourism revenues plummeted amid the coronavirus epidemic.

Sri Lanka’s biggest crisis has been the lack of foreign exchange dollars. Although the government blames the epidemic for this, experts blame the economic mismanagement.

The Sri Lankan government is now mired in debt of বিল 51 billion. The country is set to repay ঋ 6 billion in debt this year, but the money is not in its hands.

In the current situation, the Sri Lankan government has reached out to international organizations, but has not received much help.