Headlines
Redwan Rahman graduates from FilmdomThe local government minister has instructed to cut the road if necessary to remove the waterRequest to withdraw closure shop at night till EIDThe days of the Western monolithic world are over: PutinLeaders of Germany, France, and Italy in Kyiv to express solidarity‘Presidents of two countries call and pressurized Mbappé’Two U.S. citizens are thought to be missing or taken prisoner in UkraineCOVID: The technical committee suggested lifting some restrictionsPetrol prices hit record highs in the USCanada wants a stern warning against cigarettesThe task force to protect the mountains, demanded the formation of a speedy trial tribunalDepot fire: CID tries to find the cause on CCTVRussian passports are being issued in occupied UkraineFire on Parabat Express: Railroad to Sylhet is normal after 4 hoursAnother 24 children died in Mariupol, Ukraine said
Home Country The administration is looking for a way to protect the hills of...
Facebook
Twitter
WhatsApp
Print 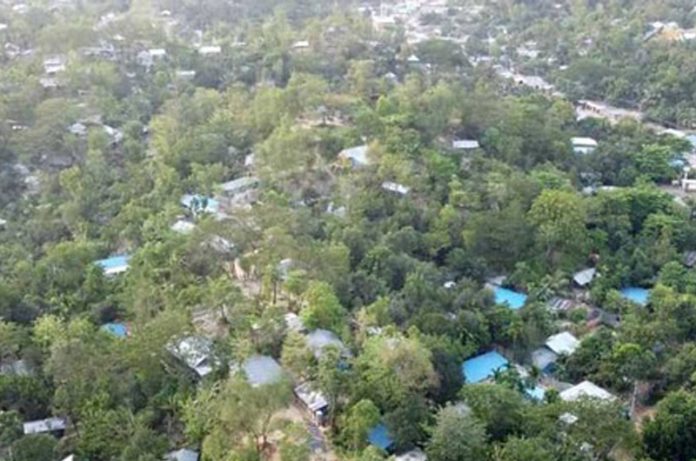 Chittagong Bureau: The hills of the Jungle Salimpur area were being cut with a tin fence for a week. It is seen that the hills of about one-acre area have been cut down to stop the activities which are going on in secret.

The local administration did not find anyone involved in cutting down the hill, even though they seized two excavators and a bulldozer during the raid on May 17 near Bridge No. 4 on Bayazid Link Road.

Thus, the hills are being cut in the northern Pahartali mouza of the city, Jalalabad mouza of Hathazari and Jungle Salimpur mouza of Sitakunda. The hills of these areas are part of the Sitakunda mountain range.

These hills are located on both sides of Bayazid Link Road from Fauzdarhat to Bayazid. The Environmental Protection Committee has set up a committee to look into the matter.

Visiting the Bayazid Link Road area on Saturday, it was seen that the jungles on both sides were surrounded by boundary walls at several places in Salimpur, Uttar Pahartali, and Jalalabad sections.

Although the hills adjacent to the road have not been cut, work is underway to cut the hills inwards and build various structures. Among these are tin-shed, semifinished, and multi-story buildings.

Experts say the Sitakunda hills are divided due to the Bayazid Link Road. If the hills continue to be cut in this way on both sides of the road, all the hills in this area will be wiped out.

Chittagong University, Professor of Forest and Environmental Sciences. Danesh Mia said, “Despite the movement, the environmentalists could not stop cutting down the hills on Bayezid Link Road.

“Sitakunda hill range has been isolated due to cutting of hills for this road. This has had the most detrimental effect on wildlife. Wildlife is divided into both sides of the road. It threatens their reproduction and livelihood. “

He said, “Political power and influential people are involved in cutting down the hills. There is no way out of this situation without a strong commitment from the government. And can the Department of the Environment stop government agencies from cutting down mountains? ”

Sitakunda Upazila Executive Officer. Shahadat Hossain said, “The residents of Jungle Salimpur area have filed a writ petition in the name of the association, they cannot be evicted before rehabilitation, such a stay order has been taken from the high court.

“Illegal establishments are not being evicted in the area now. But the expansion of the installation is going on there. ”

The official said, “Hills are being cut inwards on both sides of Link Road. In the beginning, people were housed in tiny tin-shed houses.

“Then the mountain trees are cut down. Later, when the soil was cut off, the hill collapsed in the rain. But it is not understood in advance. Plots are being sold there as well. ”

Thousands of installations have been built on the hills in the center of Chittagong city long ago. In the last decade, there have been many incidents of landslides due to heavy rains.

Sharif Chauhan, president of People’s Voice, an environmental group that protects mountains, says there are no more mountains in the city. Most of the cut buildings have been constructed.

“One of the largest mountain ranges in Chittagong is the Sitakunda range. Which extends from Sitakunda to the city and on the other side to Jalalabad. Now the Mountaineers are destroying those mountains. ”

If this continues, the leader of the organization, which has been carrying on the movement for two decades, thinks that there will be no more hills left in the district.

The Environmental Protection Committee has also identified the threat to the hills in this part. An inquiry committee was set up at its meeting in March to look into the matter.

A member of the committee said that the list of those who cut down the hill will be given by the Department of Environment and the concerned police stations. The Assistant Commissioners (Land) will list the places where there are hills.

The local administration has also asked whether an order can be brought by applying to the high court so that no more hills can be cut in Salimpur. Besides, raids, regular patrols, and fines are recommended. ”

Chittagong Additional Deputy Commissioner (LA) Masud Kamal, head of the investigation committee, said, “We have already submitted the report. We have sought feedback from the concerned UNOs and OCs.

“I have taken their recommendation for a solution. The next course of action will be decided by the Divisional Commissioner. ”

There are legal limitations and a lack of coordination

Several hills in Chittagong city are owned by various government agencies. But most government hills are not marked with borders.

At a meeting of the Hill Management Committee last month, members of the law enforcement agencies presented the issue and proposed to mark the boundaries of government hills and sesame with red flags.

Bayazid Bostami police chief said. Kamruzzaman said, “It is not clear which is the hill of government agencies and which is privately owned.

“As a result, many khas khatian hills are being cut. The hills are cleared before the rains. If it rains, it will collapse. ”

He also said that the meeting of the hill management committee has recommended conducting an operation at least once a month with the help of Assistant Commissioner Land, Environment Department, and police.

The OC said: And those who are found are workers. The real people are out of reach.

“There are several religious institutions in different hills. They claim the mountains as their property and continue to build installations. ”

An official of the district administration said, “We conduct operations to stop the cutting of hills at night. But then the people of the environment department are not available. ”

In addition, according to the Bangladesh Environmental Protection Act 2010, once a case is filed against a hill, there is a limitation to cutting the same hill and then filing a case again. The Department of Environment has raised the issue in the committee meeting.

Mofidul Alam, Chittagong district director of the environment department, said, “We have raised the issues at the meeting of the hill protection committee. We consider some hills to be at risk in areas where we are regularly cutting.

“We have taken some initiatives to protect them. The first is the identification of the hills. To verify the extent of the deforestation and to identify those involved in deforestation and bring them under the law. ”

Mofidul Alam said action would be taken accordingly after receiving the report of the inquiry committee formed for this purpose.

He said the Department of Environment was continuing its efforts to protect the hills. In the last year, we have carried out many campaigns.

“I have filed 99 cases and filed charge sheets in 97 cases. It takes time for the trial to end in court. ”

Hathazari Upazila Executive Officer, a member of the search committee. Shahidul Alam said, “In the last few months, we have carried out a campaign to stop cutting down hills and trees and imposed a fine of TK 18 lakh.

He said there was a tendency to cut down hills in the Jalalabad area.