Headlines
Redwan Rahman graduates from FilmdomThe local government minister has instructed to cut the road if necessary to remove the waterRequest to withdraw closure shop at night till EIDThe days of the Western monolithic world are over: PutinLeaders of Germany, France, and Italy in Kyiv to express solidarity‘Presidents of two countries call and pressurized Mbappé’Two U.S. citizens are thought to be missing or taken prisoner in UkraineCOVID: The technical committee suggested lifting some restrictionsPetrol prices hit record highs in the USCanada wants a stern warning against cigarettesThe task force to protect the mountains, demanded the formation of a speedy trial tribunalDepot fire: CID tries to find the cause on CCTVRussian passports are being issued in occupied UkraineFire on Parabat Express: Railroad to Sylhet is normal after 4 hoursAnother 24 children died in Mariupol, Ukraine said
Home Headlines The benefits outweigh the risks to Pfizer’s Covid vaccine: FDA
Facebook
Twitter
WhatsApp
Print 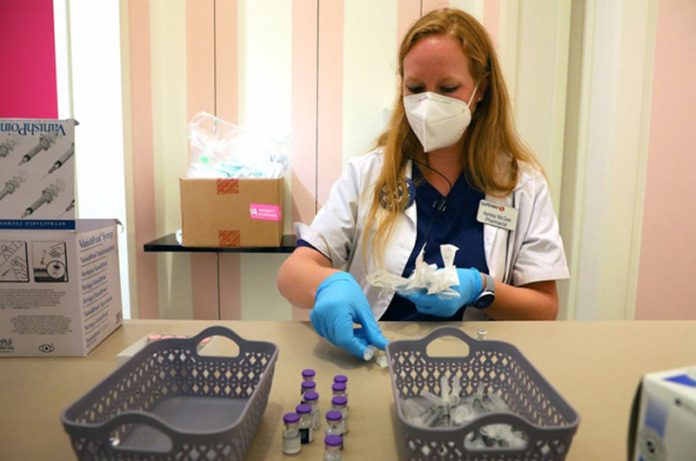 Md. Ashraful Islam: Scientists at the US Food and Drug Administration (FDA) do not pay much attention to the rare occurrence of heartburn compared to the potential benefits of Pfizer-Bioentech’s Covid 19 vaccine in children between the ages of five and 11.

Reuters reported on Friday that the US pharmaceutical company had backed the FDA, claiming that 90.6 percent of the vaccines had been tested in children in this age group.

Experts outside the agency will vote on Tuesday to determine whether the FDA will allow children between the ages of five and 11 to use the vaccine.

If approved, this will be the first FDA-approved vaccine for this age group, which will be available across the United States in early November.

The application of vaccines made by both Pfizer / Biotech and Moderna has been linked to some ‘rare’ cases of myocarditis called myocarditis, especially in children and adolescents.

FDA officials say that by analyzing most applications, the incidence of myocarditis in this age group will be the same as in the 12- to 15-year-old age group.

However, in a document submitted to the FDA, Pfizer said the risk of myocarditis would be lower among 5- to 11-year-olds. Because they were given lower doses than 12 to 15-year-olds.

The pharmaceutical company says that 17 children who received a placebo in their experimental vaccine were infected with Covid-19, while only three of those vaccinated were infected.

The test, conducted on 2,026 participants, found that more than twice as many children were vaccinated with the Covid-19 vaccine as with placebo. As such, its effectiveness is more than 90 percent.

Pfizer’s experiment, which was performed on 5- to 11-year-olds, was not intended to measure efficacy against the virus. Rather the price objective was to compare the number of antibodies that became ineffective under the effects of the vaccine in the bodies of children and adults.

Based on those results, Pfizer and Biotech said last month that their Covid-19 vaccine created widespread immunity in children.

Pfizer claimed on Friday that the number of children covered had more than doubled by expanding clinical trials to develop safety data.

According to the documents, reviewing the adverse reactions of those children who were later added did not match anything of concern for the safety of the vaccine. In this age group, 18 to 25-year-olds are usually comparable with different aspects of safety.

The children in the second group were kept under observation for a slightly shorter period of time. All of them received a second dose of the vaccine, and more than 80 percent of them passed two weeks after receiving the second dose.

Pfizer / Biotech and Modern Ticker have been found to have a ‘rare’ association with myocarditis, especially in children and adolescents.

The Pfizer / Biotech vaccine, with full FDA approval last August for those 18 years of age and older, was approved for emergency use for at least 12 years of age.

About 190 million people in the United States have been fully vaccinated, with 11 million people between the ages of 12 and 18 receiving the Pfizer vaccine.

If the FDA authorizes Pfizer to allow emergency use of the vaccine for children between the ages of 5 and 12, advisers from the US Centers for Disease Control and Prevention (CDC) will meet on November 2 and 3 to work out the procedure.