Headlines
Redwan Rahman graduates from FilmdomThe local government minister has instructed to cut the road if necessary to remove the waterRequest to withdraw closure shop at night till EIDThe days of the Western monolithic world are over: PutinLeaders of Germany, France, and Italy in Kyiv to express solidarity‘Presidents of two countries call and pressurized Mbappé’Two U.S. citizens are thought to be missing or taken prisoner in UkraineCOVID: The technical committee suggested lifting some restrictionsPetrol prices hit record highs in the USCanada wants a stern warning against cigarettesThe task force to protect the mountains, demanded the formation of a speedy trial tribunalDepot fire: CID tries to find the cause on CCTVRussian passports are being issued in occupied UkraineFire on Parabat Express: Railroad to Sylhet is normal after 4 hoursAnother 24 children died in Mariupol, Ukraine said
Home More Aviation The bodies of all the people who crashed in Nepal have been...
Facebook
Twitter
WhatsApp
Print 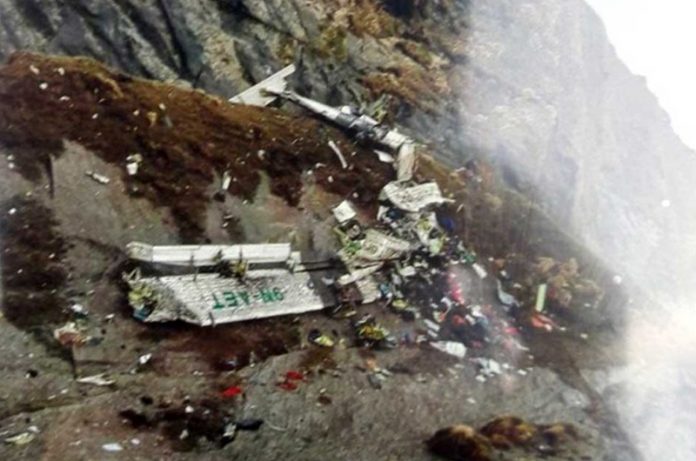 News Desk: Rescuers have recovered the bodies of 19 passengers and three crew members of a plane that crashed in Nepal.

The body of the last person was recovered from the crash site on Tuesday morning, said Deo Chandra Lal Karna, a spokesman for the Nepal Civil Aviation Authority (CAAN).

He told Reuters that 21 bodies had been recovered from the rubble on a steep hillside at an altitude of about 14,000 feet on Monday. Rescuers found the body of the last man on Tuesday morning.

Of the 22 passengers on board, four were from India, two from Germany, and 16 from Nepal.

The De Havilland Canada-DHC-6-300 twin-aisle aircraft carrying them took off from Pokhara, a tourist city in Nepal, on Sunday for Jamsum Airport. But it crashed 15 minutes after takeoff.

Pokhara Airport is 125 km west of Kathmandu, the capital of Nepal. The riders were going to Jamsam, an attractive tourist center and pilgrimage site, 80 km northwest of Pokhara. They were supposed to reach Jamsam in just 20 minutes.

But at some point after the flight, communication with the control room was cut off. The wreckage was later found in the Mustang district of the Mount Dhulagiri region on the Nepal-China border. Mount Dhulagiri is the seventh-highest peak in the world, with a height of 6,017 meters.

After the communication with the control tower was cut off, the location of the aircraft was first identified by the ‘GPS location’ of the pilot’s mobile. But rescue operations were suspended at night due to inclement weather.

On Monday morning, Nepal Army rescue workers identified the crash site and launched a rescue operation there. However, the authorities had earlier said that the chances of rescuing anyone alive from there were slim.

CAAN spokesperson Deo Chandra said the bodies of 10 people were taken to Kathmandu on Monday. The remaining 12 will be taken away on Tuesday.

Earlier on Sunday, the names of the victims were revealed, he said.

The government of Nepal has formed a five-member committee to find out the cause of the accident and take preventive measures for the aviation sector.

Nepal has eight of the 14 highest peaks in the world, including Mount Everest. Casualties in plane crashes often occur there.

In 2018, a US-Bangla Airlines flight from Dhaka to Kathmandu crashed on the runway of Tribhuvan Airport and caught fire, killing 51 passengers. A total of 71 passengers were on that flight.

In 1992, a Pakistan International Airlines plane crashed into a mountain while trying to land in Kathmandu. All 167 riders died.