Headlines
Redwan Rahman graduates from FilmdomThe local government minister has instructed to cut the road if necessary to remove the waterRequest to withdraw closure shop at night till EIDThe days of the Western monolithic world are over: PutinLeaders of Germany, France, and Italy in Kyiv to express solidarity‘Presidents of two countries call and pressurized Mbappé’Two U.S. citizens are thought to be missing or taken prisoner in UkraineCOVID: The technical committee suggested lifting some restrictionsPetrol prices hit record highs in the USCanada wants a stern warning against cigarettesThe task force to protect the mountains, demanded the formation of a speedy trial tribunalDepot fire: CID tries to find the cause on CCTVRussian passports are being issued in occupied UkraineFire on Parabat Express: Railroad to Sylhet is normal after 4 hoursAnother 24 children died in Mariupol, Ukraine said
Home International The bride and groom climbed on the dachshund and pushed the flood...
Facebook
Twitter
WhatsApp
Print 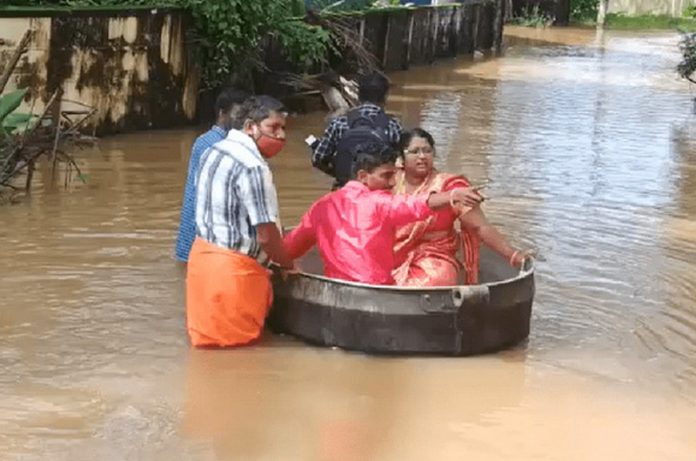 Md. Ashraful Islam: Roads are flooded in heavy rains, in which a couple from Kerala, India, went to the temple to get married on a cooking stove.

The BBC writes that the picture of them floating on social media has given joy to many people in the state which was devastated by heavy rains, floods, and landslides.

Due to the continuous rains of the last few days, the river water has risen and many roads including bridges have been submerged in Kerala. Many villages and towns in the state have been isolated due to waterlogging.

But that is why Akash and Aishwarya of Thalavadi village did not want to delay the happy marriage on Monday; They both work as health workers at a hospital in Chengannur.

The temple in the village where they performed good deeds was also partially submerged. And waist water on the way to reach the temple.

So Akash-Aishwarya borrowed a huge aluminum dachki from a temple next to the house and sat on it in a wedding dress.

The groom Akash told PTI that they had fixed the date of the wedding a few days ago. There was no certainty as to when he would get the chance to get married again under the pressure of work if Lagna was postponed.

And in such a short time during the wedding journey in the flood, it was not possible for them to get any other vehicle except the cooking pot.

Aishwarya, the bride-to-be, told local television channel Asianet, “We could not have imagined that our wedding would be in such a state.”

The newlyweds said that they had completed the marriage ceremony with only a few relatives of the family.

However, after their pictures were spread on social media, it seems that they have been able to share this special day with many.