Headlines
Redwan Rahman graduates from FilmdomThe local government minister has instructed to cut the road if necessary to remove the waterRequest to withdraw closure shop at night till EIDThe days of the Western monolithic world are over: PutinLeaders of Germany, France, and Italy in Kyiv to express solidarity‘Presidents of two countries call and pressurized Mbappé’Two U.S. citizens are thought to be missing or taken prisoner in UkraineCOVID: The technical committee suggested lifting some restrictionsPetrol prices hit record highs in the USCanada wants a stern warning against cigarettesThe task force to protect the mountains, demanded the formation of a speedy trial tribunalDepot fire: CID tries to find the cause on CCTVRussian passports are being issued in occupied UkraineFire on Parabat Express: Railroad to Sylhet is normal after 4 hoursAnother 24 children died in Mariupol, Ukraine said
Home Sports The coach hinted at a change in the batting order against Oman
Facebook
Twitter
WhatsApp
Print 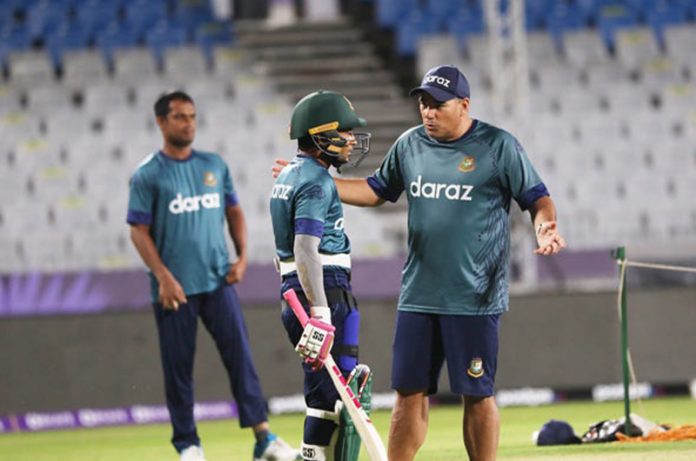 Sports Correspondent: Mohammad Naeem Sheikh is returning to the XI, coach Russell Domingo confirmed the day before the match. He will also open the batting in place of the majestic government. The coach, however, did not reveal whether there would be any further changes in the XI. However, he informed that the batting order will also be changed in the match against Oman.

The batting order in the top and middle order in the losing match against Scotland was as questionable as the batting order. Afif Hossain, who has been battling the most sublimely in recent times, has been relegated to number six. Nurul Hasan Sohan, who batted brilliantly in the warm-up match before the World Cup, came in seventh.

Batsmen in form have been dropped so much later, especially in 20-over cricket, where batsmen have less time on their hands, seen in very few teams in the world. Although captain Mahmudullah said after the match, number six is ​​the right place for Afif.

However, Domingo spoke before the match against Oman about the flexibility of the batting order. The coach did not say where the change would take place. However, he has tried to give some ideas about their thoughts.

“I always like to have one right-handed and one left-handed on the wicket. We will therefore think about our batting lineup in the next match and try to have different types of batsmen on the wicket together. Don’t be the same. We’ve had a lot of discussions about that and we’ll probably do it. “

“There will be no big change. However, in the batting line-up, there may be one or two sides. As you have seen in the Australia and New Zealand series, we have not been steadfast in the batting order. I have played Afif sometimes in five, sometimes in seven, Sohan in seven. So it will depend on the situation. ”