Headlines
Redwan Rahman graduates from FilmdomThe local government minister has instructed to cut the road if necessary to remove the waterRequest to withdraw closure shop at night till EIDThe days of the Western monolithic world are over: PutinLeaders of Germany, France, and Italy in Kyiv to express solidarity‘Presidents of two countries call and pressurized Mbappé’Two U.S. citizens are thought to be missing or taken prisoner in UkraineCOVID: The technical committee suggested lifting some restrictionsPetrol prices hit record highs in the USCanada wants a stern warning against cigarettesThe task force to protect the mountains, demanded the formation of a speedy trial tribunalDepot fire: CID tries to find the cause on CCTVRussian passports are being issued in occupied UkraineFire on Parabat Express: Railroad to Sylhet is normal after 4 hoursAnother 24 children died in Mariupol, Ukraine said
Home Country The danger of heavy rain in 7 Divisions, warning signal number 2...
Facebook
Twitter
WhatsApp
Print 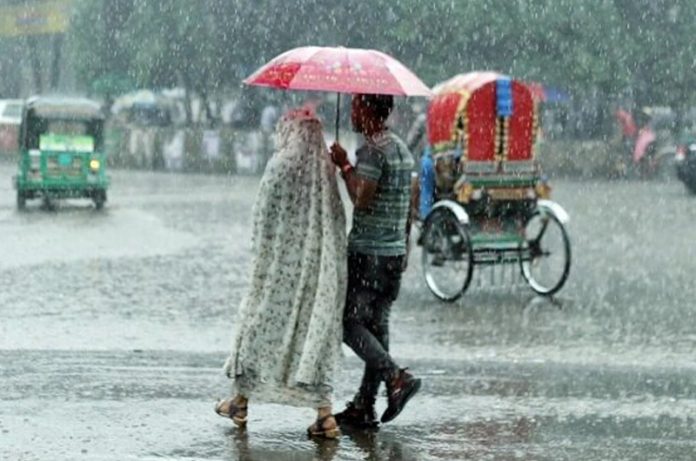 Senior Reporter: The Bangladesh Meteorological Department has forecast heavy rains in seven parts of the country due to the formation of deep moving clouds (thunderclouds) in the country. Besides, there is a risk of Kalavaishakhi or strong winds in 16 regions. Therefore, the agency has asked the river ports in these areas to display the warning signal number 2.

In the context of the formation of cyclone ‘Ashani’ in the Bay of Bengal, it started raining in the country on the last 9th. The coastal areas were more prone to rainfall, while the northern regions received less rainfall. Now, the tendency for rains has increased in the north and decreased in the coastal areas.

Rainfall is likely to decrease from Sunday (May 15). However, meteorologists said that the rain may increase again by the end of next week.

Dinajpur received the heaviest rainfall in the last 24 hours from 6 pm on Thursday to 6 pm on Friday, 201 mm. At this time, one millimeter of rain fell in Dhaka. Though there were clouds in the sky of Dhaka on Friday, there was no rain throughout the day.

The meteorological department warned of heavy rains on Friday (May 13th) evening, adding that a combination of water vapor coming from the Bay of Bengal with western light pressure was creating deep moving clouds in Bangladesh. There may be moderate to heavy (23 to 43 mm) to heavy (89 mm or more) rain in Rangpur, Mymensingh, Sylhet, Rajshahi, Khulna, Dhaka, and Chittagong divisions in the next 24 hours from 6 pm onwards.

On the other hand, the weather forecast for the inland river ports of the country from 4:30 pm to 1:00 am on Friday said, Rajshahi, Pabna, Bogra, Tangail, Mymensingh, Dhaka, Faridpur, Madaripur, Jessore, Kushtia, Khulna, Barisal, Patuakhali, Noakhali, Temperate winds with thunderstorms of 60 to 80 km from the west or north-west may blow over Sylhet region. River ports in these areas have been asked to display the second naval warning signal.

It also said that there could be temporary gusts of wind or thunderstorms with a speed of 45 to 60 km from the west or north-west of the rest of the country. River ports in these areas have been asked to display warning signal number 1.