Headlines
Redwan Rahman graduates from FilmdomThe local government minister has instructed to cut the road if necessary to remove the waterRequest to withdraw closure shop at night till EIDThe days of the Western monolithic world are over: PutinLeaders of Germany, France, and Italy in Kyiv to express solidarity‘Presidents of two countries call and pressurized Mbappé’Two U.S. citizens are thought to be missing or taken prisoner in UkraineCOVID: The technical committee suggested lifting some restrictionsPetrol prices hit record highs in the USCanada wants a stern warning against cigarettesThe task force to protect the mountains, demanded the formation of a speedy trial tribunalDepot fire: CID tries to find the cause on CCTVRussian passports are being issued in occupied UkraineFire on Parabat Express: Railroad to Sylhet is normal after 4 hoursAnother 24 children died in Mariupol, Ukraine said
Home International The Ethiopian army claims to have killed 5,600 rebels
Facebook
Twitter
WhatsApp
Print 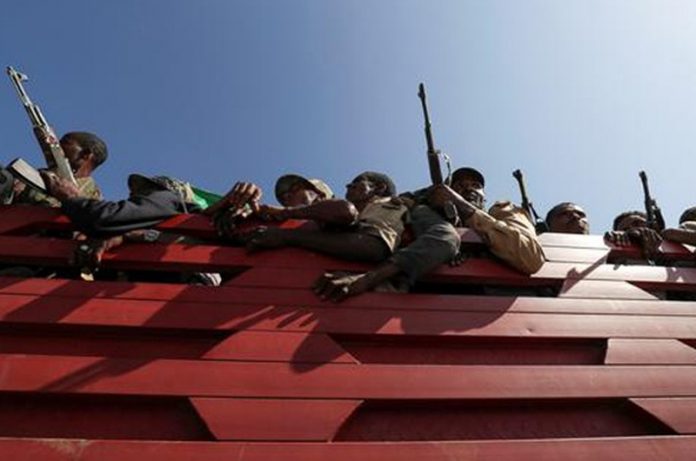 News Desk: The Ethiopian army has claimed responsibility for killing more than 5,600 members of the Tigris rebels. The army is fighting the rebels in the north.

This bloody conflict has been on the rise since last November. The country’s top general, Bacha Debele, issued a statement on the number of rebel killings, the BBC reported.

However, Debel’s statement did not give a timeline for when so many rebels were killed. Correspondents say the rebels may have been killed in recent fighting.

Debel’s statement added that 2,300 rebels had been wounded in the attack. Another 2,000 people have been arrested.

The United Nations says millions of people are starving in Ethiopia because of the conflict. General Debel claims that Tigris rebels are trying to divide Ethiopia.

A division of the Tigrai People’s Liberation Front (TPLF) tried to take control of the Humra area on the Tigrai and Amhara border. But they have been completely destroyed.

However, the rebels have not yet commented on the claim.

Fighting erupted in Ethiopia last year after months of squabbling between Prime Minister Abi Ahmed Sarkar and leaders of the TPLF, the main political party in the Tigris region.

The Ethiopian president has sent troops to overthrow the Tigris regional government, accusing the TPLF of being behind several attacks on military bases.

Since then, fighting between the two sides has killed thousands and left millions homeless, with many fleeing to Sudan.