Headlines
Redwan Rahman graduates from FilmdomThe local government minister has instructed to cut the road if necessary to remove the waterRequest to withdraw closure shop at night till EIDThe days of the Western monolithic world are over: PutinLeaders of Germany, France, and Italy in Kyiv to express solidarity‘Presidents of two countries call and pressurized Mbappé’Two U.S. citizens are thought to be missing or taken prisoner in UkraineCOVID: The technical committee suggested lifting some restrictionsPetrol prices hit record highs in the USCanada wants a stern warning against cigarettesThe task force to protect the mountains, demanded the formation of a speedy trial tribunalDepot fire: CID tries to find the cause on CCTVRussian passports are being issued in occupied UkraineFire on Parabat Express: Railroad to Sylhet is normal after 4 hoursAnother 24 children died in Mariupol, Ukraine said
Home Country The first Hajj flight of Biman left Dhaka with 410 pilgrims
Facebook
Twitter
WhatsApp
Print 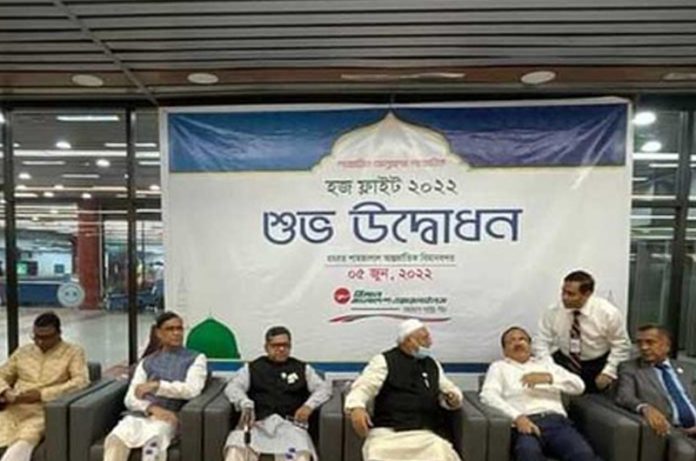 Senior Reporter: The first flight of Biman Bangladesh Airlines left Dhaka for Saudi Arabia with 410 pilgrims after two years due to the epidemic.

Shahjalal International Airport, Executive Director. Kamrul Islam said the pilgrims were brought to the airport by several buses from Ashkona at 5 am on Sunday. The plane carrying them left for Saudi Arabia around 9 am.

Prime Minister Sheikh Hasina inaugurated this year’s Hajj program on Friday. This year, a total of 56,575 Bangladeshis are getting the opportunity to go for Hajj. Of these, 4,000 are in government management and 53,585 are in private management.

Out of the total pilgrims, Biman Bangladesh Airlines will carry 29,000 passengers this time. For this, Biman will have to operate 130 flights to and from Saudi Arabia.

The holy Hajj will be held in Saudi Arabia on July 8, subject to the sighting of the moon. Due to the coronavirus epidemic, the Saudi government has given the opportunity to perform Hajj on a very limited scale in the last two years.

One million people around the world are being given the opportunity to take part in the Hajj this year after the dreaded epidemic was over. Saudi Arabia also sets quotas for pilgrims from any country.

In the previous years of COVID, more than one and a quarter lakh people from Bangladesh used to get the opportunity to perform Hajj.