Headlines
Redwan Rahman graduates from FilmdomThe local government minister has instructed to cut the road if necessary to remove the waterRequest to withdraw closure shop at night till EIDThe days of the Western monolithic world are over: PutinLeaders of Germany, France, and Italy in Kyiv to express solidarity‘Presidents of two countries call and pressurized Mbappé’Two U.S. citizens are thought to be missing or taken prisoner in UkraineCOVID: The technical committee suggested lifting some restrictionsPetrol prices hit record highs in the USCanada wants a stern warning against cigarettesThe task force to protect the mountains, demanded the formation of a speedy trial tribunalDepot fire: CID tries to find the cause on CCTVRussian passports are being issued in occupied UkraineFire on Parabat Express: Railroad to Sylhet is normal after 4 hoursAnother 24 children died in Mariupol, Ukraine said
Home More Agriculture The government will double rice production in 8 years
Facebook
Twitter
WhatsApp
Print 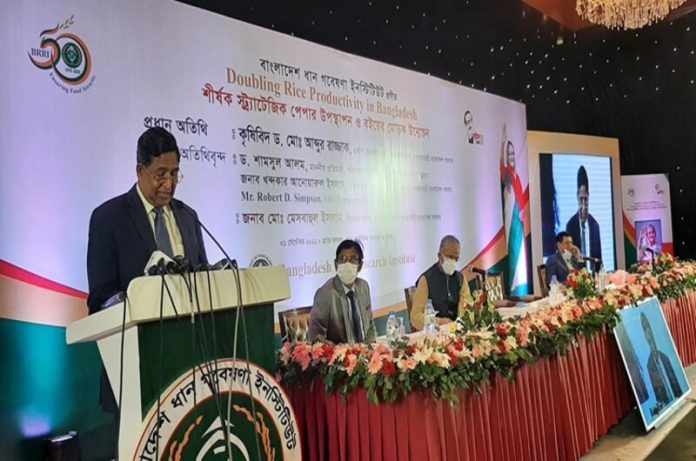 News Desk: Under the Sustainable Development Goals (SDGs), the government will double rice productivity by 2030. For this, a strategy paper has been presented by Bangladesh Rice Research Institute (BRI).

On Wednesday (September 1) at Hotel Sonargaon, a strategy paper titled ‘Double Rice Productivity in Bangladesh-DRP’ was presented and unveiled. The chief guest was the Minister of Agriculture. Md. Abdur Razzak.

He said the present government has succeeded in achieving the Millennium Development Goals (MDGs) ahead of the time announced in the election manifesto. In continuation of this, the productivity of rice will be doubled before SDG. This is not a dream, it is a reality.

He said that after independence, there was only one ton of rice per hectare in this country. Now it’s Charton. It has quadrupled in 50 years. It is not impossible that it will double in the future.

Referring to the need to import rice even after self-sufficiency, the minister said the crop depends on the weather. Occasionally production is disrupted. However, in the situation we are in, there is no situation where millions of people die without eating like the mantra of 43 years. Now no one eats without it.

The big challenge in meeting the SDGs, not the availability of food, is ensuring nutrition, the minister said. “I lag far behind in nutrition,” he said. Now I am working to fulfill that. The only paddy is being cultivated in 6 percent of the land of the country, it needs to be diversified.

Senior Secretary of the Ministry of Agriculture Mesbahul Islam presided over the ceremony and presented the strategy of BRI. Md. Shahjahan Kabir. State Minister for Planning was also present as a special guest. Shamsul Alam.