Headlines
Redwan Rahman graduates from FilmdomThe local government minister has instructed to cut the road if necessary to remove the waterRequest to withdraw closure shop at night till EIDThe days of the Western monolithic world are over: PutinLeaders of Germany, France, and Italy in Kyiv to express solidarity‘Presidents of two countries call and pressurized Mbappé’Two U.S. citizens are thought to be missing or taken prisoner in UkraineCOVID: The technical committee suggested lifting some restrictionsPetrol prices hit record highs in the USCanada wants a stern warning against cigarettesThe task force to protect the mountains, demanded the formation of a speedy trial tribunalDepot fire: CID tries to find the cause on CCTVRussian passports are being issued in occupied UkraineFire on Parabat Express: Railroad to Sylhet is normal after 4 hoursAnother 24 children died in Mariupol, Ukraine said
Home Country The journey is ‘tolerable’ despite the pressure on the north
Facebook
Twitter
WhatsApp
Print 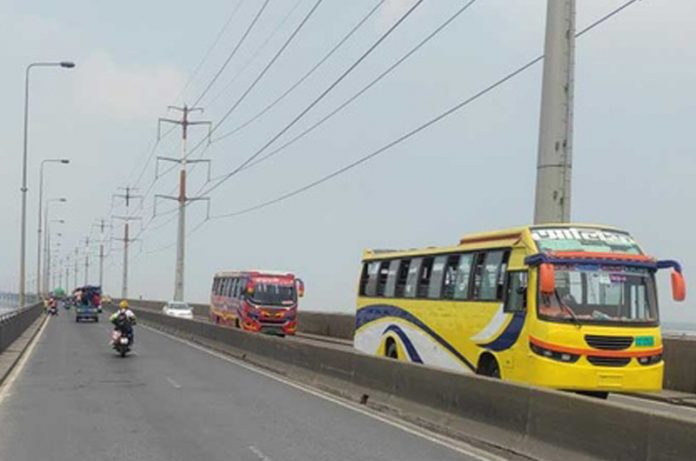 From Friday morning till noon, there was no unbearable traffic jam on the eastern link road of Bangabandhu Bridge from Chandra in Gazipur to Elenga and across the bridge to the border of Sirajganj.

More than 800 police personnel, including 200 APBN members, are working on the Elengar two-lane road in Tangail, the gateway to North Bengal. On the other hand, more than five hundred policemen are on duty at the border of Sirajganj on the highway.

Tangail Superintendent of Police Sarkar Mohammad Kaiser said vehicles could come from Dhaka to Elenga in Kalihati Upazila via a four-lane road. But the road from Elengar to the bridge is two lanes. Four-lane vehicles enter the two-lane road, causing some traffic jams.

This time, it is planned to make a one and a half kilometer (one way) from Elenga to the roundabout near the toll plaza of the bridge. This road will run from Elenga to Dhaka in North Bengal.

Vehicles going from North Bengal to Dhaka will cross the bridge from Golchattar to Elenga via Bhunapur in the north as an alternative road.
Besides, instructions have also been given to passengers to use toilets at petrol pumps, hotels, and restaurants along the highway if they get stuck in traffic.

The police superintendent said there were no pumps or restaurants along the 13-and-a-half-kilometer road from Elenga to the bridge. So 25 temporary toilets have been constructed in that part. Apart from this, water, dry food, and 15 temporary toilets have been provided to the people trapped in the traffic jam from Elenga to the bridge so that there would be no inconvenience during Iftar and Sehri.

On the other hand, Sirajganj Superintendent of Police Hasibul Alam also said that various preparations have been made to reduce traffic congestion on the way to North Bengal from the roundabout on the west bank of Bangabandhu Bridge.

He said that one side of Nalka II bridge has already been opened to facilitate the journey of homebound people on EID. Besides, the district highways have been divided into four sectors to control law and order and avoid traffic jams.

There will be 572 police personnel and the district police as well as the highway police. In addition, three quick response teams have been formed.
The superintendent of police also warned that negligence in carrying out this duty of the police on the highway would not be tolerated.

On Friday morning, a severe traffic jam occurred in the northbound lane in an area of ​​18 km from Bangabandhu Bridge Western Link Highway to Nalka. However, due to the activities of the police, the situation came under control by 11 pm. Although there has been no traffic jam on the highway since then, the vehicles are moving slowly.

Sirajganj traffic inspector Salekuzzaman Salek said there was a slowdown on the highway due to the increase in the number of vehicles. Occasionally there is a traffic jam, but it is not long-lasting. Traffic, district, police station, and highway police are on the highway to keep the traffic normal.