Headlines
Redwan Rahman graduates from FilmdomThe local government minister has instructed to cut the road if necessary to remove the waterRequest to withdraw closure shop at night till EIDThe days of the Western monolithic world are over: PutinLeaders of Germany, France, and Italy in Kyiv to express solidarity‘Presidents of two countries call and pressurized Mbappé’Two U.S. citizens are thought to be missing or taken prisoner in UkraineCOVID: The technical committee suggested lifting some restrictionsPetrol prices hit record highs in the USCanada wants a stern warning against cigarettesThe task force to protect the mountains, demanded the formation of a speedy trial tribunalDepot fire: CID tries to find the cause on CCTVRussian passports are being issued in occupied UkraineFire on Parabat Express: Railroad to Sylhet is normal after 4 hoursAnother 24 children died in Mariupol, Ukraine said
Home More Politics The Khilafah Majlis left the BNP alliance, saying it was ‘politically ineffective’
Facebook
Twitter
WhatsApp
Print 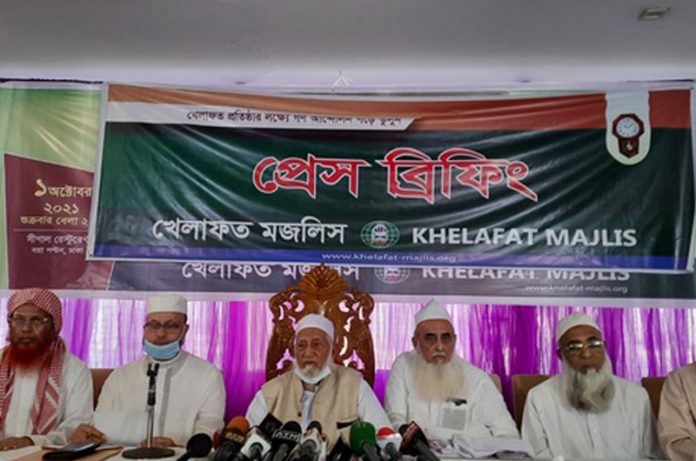 Senior Reporter: The Khilafah Majlis left the alliance, citing the fact that the BNP-led alliance has become ‘politically ineffective’.

Acting Secretary General Advocate Mohammad at a press conference after the meeting of the party’s highest policymaking forum Majlis on Friday afternoon. Jahangir Hossain announced the unanimous decision of the organization to leave the alliance.

Earlier on July 14 this year, a section of Jamiat Ulama Islam withdrew from the BNP-led 20-party alliance citing “lack of proper evaluation”.

Maulana Bahauddin Zakaria, acting secretary-general of Jamiat Ulama, told a news conference that day that he was leaving the alliance.

Besides, on May 8, 2019, the Bangladesh Jatiya Party (BJP) led by Andalib Rahman Perth announced to leave the alliance due to conflict over joining the parliament.

Earlier, on October 26, 2016, a section of the Labor Party withdrew from the 20-party alliance due to disagreement over the BNP’s joining the National Unity Front.

At a press conference on Friday, the acting secretary-general of the Majlis in Khilafah gave reasons for leaving the alliance.

He said, “Khilafat Majlis has been in the BNP alliance for 22 long years. Since 2019, the alliance has not had any visible political activities and programs. With the formation of the National Front in 2016, the 20-party alliance was made practically ineffective.

“Considering the ideological, organizational, and political situation, the Shura session of the Majlis today decided that the Khilafah Majlis will play a role in the field as an ideological organization with its own unique characteristics and is leaving relations with all political alliances, including the 20-party alliance.”

In response to a question, the acting secretary-general said they would not join any other alliance.

The press conference was held at a restaurant in Purana Paltan.

Earlier, a meeting of the Shura was held under the chairmanship of Maulana Muhammad Ishaq. The meeting of more than two hundred members decided to leave the alliance.

In the last few years, some parties, including the BJP, have left the alliance due to differences, such as the Islamic Unity Alliance, the NPP, the NAP, the Labor Party, and the NDP.

Most recently, on July 14, a section of Jamiat Ulama Islam withdrew from the alliance.