Headlines
Redwan Rahman graduates from FilmdomThe local government minister has instructed to cut the road if necessary to remove the waterRequest to withdraw closure shop at night till EIDThe days of the Western monolithic world are over: PutinLeaders of Germany, France, and Italy in Kyiv to express solidarity‘Presidents of two countries call and pressurized Mbappé’Two U.S. citizens are thought to be missing or taken prisoner in UkraineCOVID: The technical committee suggested lifting some restrictionsPetrol prices hit record highs in the USCanada wants a stern warning against cigarettesThe task force to protect the mountains, demanded the formation of a speedy trial tribunalDepot fire: CID tries to find the cause on CCTVRussian passports are being issued in occupied UkraineFire on Parabat Express: Railroad to Sylhet is normal after 4 hoursAnother 24 children died in Mariupol, Ukraine said
Home More Agriculture The locals have worked all night to save the dam in Sunamganj
Facebook
Twitter
WhatsApp
Print 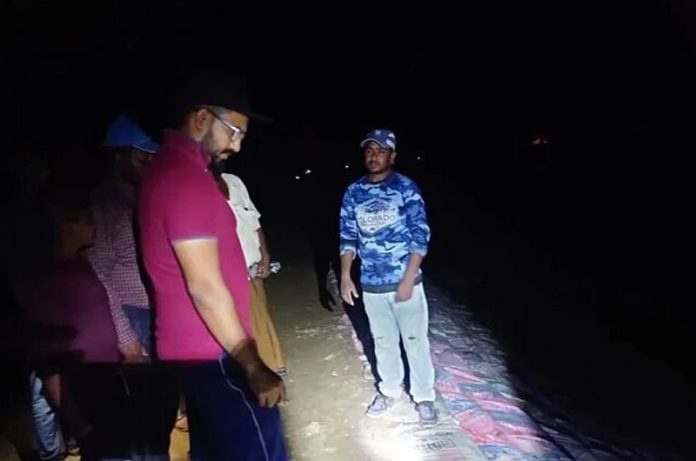 Staff Reporter: In Sunamganj, the locals have spent the night in various dams of the haor to protect their crops. They worked in the voluntary shelter with bamboo and sacks all night on Monday to prevent the breakage of the dam. In some haors Upazila administration, Paubo officials, and people’s representatives were also with the local people.

Miking was carried out in the mosques of the villages last night to monitor and protect the crops from the dams. Meanwhile, in Sunamganj, although it did not rain till last night and today till 10 am on Tuesday, the hill slopes continue to descend from the upper reaches.

Paubo officials say upstream (Cherrapunji in India) rains are the main cause of fear. There is not much rain in Sunamganj. But due to heavy rains in Cherrapunji, the hill slope is coming down.

Boro crops of Tahirpur upazila of the district are most at risk due to the slope of the hill coming down from the upper reaches in the last six days. Last Saturday, a dam at Tanguar Haor in the upazila broke and sank crops. All the haor crops in the district are now at risk as the hill slopes continue to fall. In the last two days, the crops of Chhota Kanlar Haor of Sadar Upazila and Munarkhala Haor of Shalla Upazila have been flooded.

Last night, a crack appeared in the crop protection dam of Shaldigha Haor in Shantiganj Upazila, which put the dam at extreme risk. When the mike of the area mosque preached it, hundreds of peasants went to the dam at night and carried out the renovation work. The dam has been made safe for the time being by working till late at night.

Upon receiving the news, Upazila Nirbahi Officer (UNO) Anwar Uz Zaman and Vice Chairman of Upazila Parishad Nur Hossain went to the spot. UNO Sadi Ur Rahim Jadid went there after receiving information that water had entered the haor through a leak in a dam at Angaruli Haor in Bishwambharpur Upazila. Later he repaired it quickly with the help of local people. Meanwhile, UNO Md. Tahirpur Upazila Matian Haor Barungamara area with the local people to repair it. Raihan Kabir.

Tahirpur Upazila Parishad Chairman Karunasindhu Chowdhury said, “The slope of the hill continues. So the risk of the crop is increasing. We are in the field with the farmers day and night. ‘

Haor farmers say they fear a situation similar to 2016. Because it will take at least 10 to 12 days for rice to ripen in Haor. At this time in 2016, all the raw paddy of Haor was submerged. If the slope continues, the dams provided by the Water Development Board (Paubo) will not protect crops.

Sunamganj Paubo executive engineer. Jahrul Islam said that everyone including the administration and Paubo officials is in the field. Wherever necessary, everything will be done in the interest of crop protection. This time in 626 projects in Sunamganj, a 520 km crop protection embankment has been constructed and renovated. It has an allocation of 121 crores. They are also working in the field.

According to Sunamganj Agriculture Extension Department, boro paddy has been planted in 2 lakh 22 thousand 605 hectares of land in the district this time. It is expected to produce a crop of 3,200 crores.

Sunamganj Deputy Commissioner. Jahangir Hossain said, “We are trying our best to protect the crops of Haor. However, water has not yet entered any large haor. But the way the slope of the upstream is going down is unusual. Administration, Paubo officials, farmers, people’s representatives — everyone is in the field.