Headlines
Redwan Rahman graduates from FilmdomThe local government minister has instructed to cut the road if necessary to remove the waterRequest to withdraw closure shop at night till EIDThe days of the Western monolithic world are over: PutinLeaders of Germany, France, and Italy in Kyiv to express solidarity‘Presidents of two countries call and pressurized Mbappé’Two U.S. citizens are thought to be missing or taken prisoner in UkraineCOVID: The technical committee suggested lifting some restrictionsPetrol prices hit record highs in the USCanada wants a stern warning against cigarettesThe task force to protect the mountains, demanded the formation of a speedy trial tribunalDepot fire: CID tries to find the cause on CCTVRussian passports are being issued in occupied UkraineFire on Parabat Express: Railroad to Sylhet is normal after 4 hoursAnother 24 children died in Mariupol, Ukraine said
Home Headlines The navy and air force should be able to keep pace with...
Facebook
Twitter
WhatsApp
Print 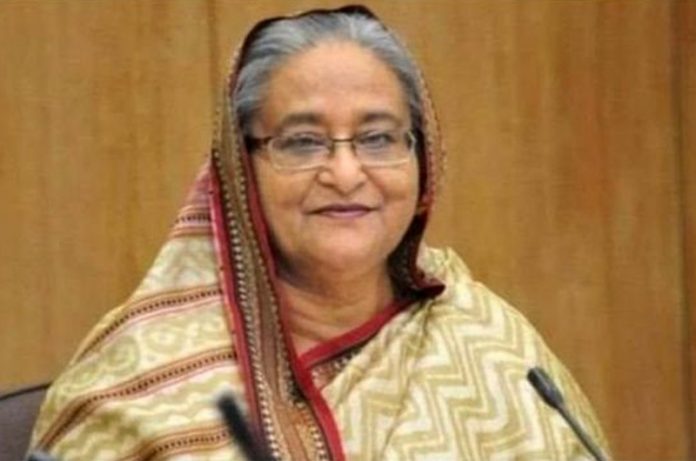 Staff Reporter: Prime Minister Sheikh Hasina has directed the Navy and Air Force to be prepared to keep pace with the technology-dependent world to safeguard the independence and sovereignty of the country.

He gave the instructions by participating in the ‘Navy and Air Force Electoral Board’ via video conference from Ganobhaban on Sunday.

Sheikh Hasina said her government has taken steps to gradually implement the far-reaching plans of Father of the Nation Bangabandhu Sheikh Mujibur Rahman to build a modern navy and air force.

“It simply came to our notice then. Few places in terms of geographical boundaries. I have to meet the basic needs of all these people. They have to provide food, clothing, shelter, medical care, education.

“But where the world is moving forward, new technologies of science are coming, the current world is becoming technology dependent. We must also be prepared to keep pace with him in order to safeguard our independence and sovereignty. ”

Sheikh Hasina said the government formulated a new national defense policy in 2016 in the light of the defense policy formulated by Father of the Nation Bangabandhu Sheikh Mujibur Rahman for the development of the armed forces, which was approved by the cabinet.

He said that the Forces Goal 2030 was formulated with the aim of building an up-to-date armed force. And we have started the work of its implementation. ”

“We do not want to fight anyone,” she said. Father of the Nation Bangabandhu Sheikh Mujib’s foreign policy is ‘friendship with all, not enmity with anyone. All I can say is that we are moving forward very efficiently with friendly relations with each country.

“In the overall development of the country, we need to get as much cooperation as we can from anyone or those who will be our development partners, keeping good relations with everyone, maintaining a good relationship, but we are working.”

“We don’t want war, we want peace,” he said. Because without peace, no country can prosper. War brings destruction. We do not want to go to destruction. But if someone attacks, we have to be fully prepared to protect the country from the attack of that external enemy.

The Prime Minister also spoke about the special incentives being given by the government to ensure that people of all walks of life do not suffer from coronavirus epidemics, trade and commerce are not harmed or production is not disrupted.

Commenting that Bangladesh is moving forward even in the midst of the epidemic crisis, he said, “But we are moving on. We have been able to continue our development because our goal is to develop our country. ”

“I want to let everyone know that I am the daughter of Bangabandhu Sheikh Mujib, the father of the nation,” he told a naval and air force election board member. Not just as a ruler, I am a servant of the people of Bangladesh. I consider myself a servant. I think serving the people, the welfare of the people is my biggest job. ”

Stating that he will continue to work with that vow, the Prime Minister said, “I always seek your cooperation in making the country developed and prosperous. I want you to stand by the people of this country whenever you need to run the state, to serve the people the way you are serving them. ”

The Prime Minister said, “We are proud of our armed forces. Proud of our Navy, Air Force. And we think that in the future, those who are capable of defending our independence and sovereignty will be promoted and given the responsibility of running every force. And will take the country forward. Bangladesh will follow the ideals of Father of the Nation Bangabandhu Sheikh Mujibur Rahman, will carry on with the spirit of the liberation war. And Bangladesh will be the future of developed, prosperous golden Bengal. ”

Praising the Navy and Air Force, the government said, “Bangladesh Navy, Air Force has gained the status of a highly disciplined, efficient and professional force not only in the country but also in the international arena. Their self-sacrifice and devotion to duty have brought rare honor and dignity to Bangladesh, which has also brightened the image of Bangladesh in the outside world. ”

The Prime Minister told the members of the Electoral Board that they should choose the leadership of the future with ‘knowledge and wisdom’ on the basis of modern methods like ‘Tabulated Record and Comparative Evaluation’ (TRACE) in the Navy and Air Force.

“I would also like to say that in many cases, it is seen that many people can show a lot of skill in performing their duties. They should not be neglected. You will consider that as well. ”

Senior officials of the two forces were present at the election board meeting at the Naval and Air Force Headquarters in Dhaka Cantonment.