Headlines
Redwan Rahman graduates from FilmdomThe local government minister has instructed to cut the road if necessary to remove the waterRequest to withdraw closure shop at night till EIDThe days of the Western monolithic world are over: PutinLeaders of Germany, France, and Italy in Kyiv to express solidarity‘Presidents of two countries call and pressurized Mbappé’Two U.S. citizens are thought to be missing or taken prisoner in UkraineCOVID: The technical committee suggested lifting some restrictionsPetrol prices hit record highs in the USCanada wants a stern warning against cigarettesThe task force to protect the mountains, demanded the formation of a speedy trial tribunalDepot fire: CID tries to find the cause on CCTVRussian passports are being issued in occupied UkraineFire on Parabat Express: Railroad to Sylhet is normal after 4 hoursAnother 24 children died in Mariupol, Ukraine said
Home Country The Payra Bridge opened a new door on the way to Kuakata
Facebook
Twitter
WhatsApp
Print 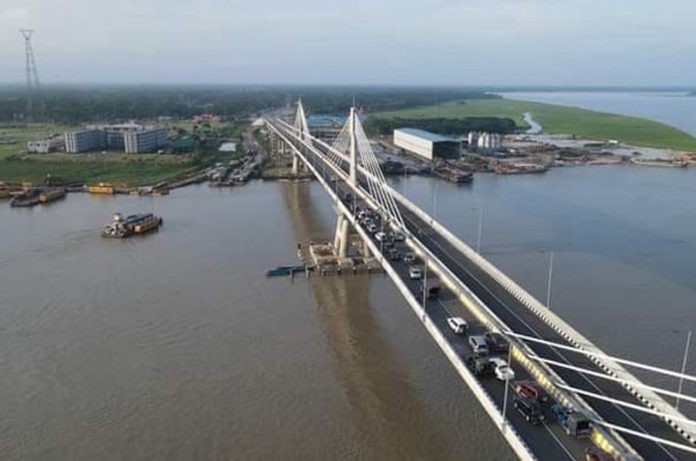 Staff Reporter: The Payra Bridge has opened a new door of uninterrupted road connectivity with the sea city of Kuakata and the rest of the country, including the capital.

Prime Minister Sheikh Hasina on Sunday inaugurated the four-lane bridge over the Payra River at Lebukhali in Patuakhali.

On the same occasion, he laid the foundation stone for a six-lane improvement project on the Dhaka-Sylhet and Sylhet Tamabil highways.

The Prime Minister attended the event via video conference from Ganobhaban in Dhaka. He said he would have been happiest if he had been able to cross the bridge by car if he could have performed the inauguration ceremony by physically appearing on the payra bridge. But in the midst of the epidemic, ‘a kind of captive life’ was not possible.

With the launch of the 1.5 km long bridge, built at a cost of around Tk 1,500 crore, it has become easier to reach Kuakata directly by road.

The bridge will save time and money as well as reduce the suffering of ferry crossings in road communication between Barisal and Patuakhali and Barguna.

At one time, ten ferries had to be crossed by the road from Dhaka to Barisal via Kuakata beach. Due to the extensive development of road infrastructure in the past years, only two ferries remained on this route. Of these, only the Padma is left with the launch of the bridge over the Payra River. With the opening of the Padma Bridge next year, Kuakata can be reached by road from Dhaka without any ferry crossing.

The bridge was constructed by the Chinese contractor Longjian Roads and Bridge Company with the joint funding of the Government of Bangladesh and the Kuwait Fund for Arab Economic Development.

The Shah Amanat Bridge over the Karnafuli River in Chittagong has been built in the same manner as the ‘Extradicted Cable Stay’ technology.

Abdul Halim, project director of Payra Bridge, said the bridge has been constructed at a height of 17.30 meters above the river level so that the movement of vessels is not disrupted.

To keep the water flowing properly, a large pier has been set up in the middle of the Payra river and the bridge has been built with a length of 1,460 meters and a width of 19.6 meters.

The pier has been placed by piling 130 meters deep. The Bridge Health Monitor has been used to protect the bridge from disasters like earthquakes.

In this technology, even if extra heavy vehicles that can damage the bridge get on the bridge, the danger signal will sound.

The people of Patuakhali have been waiting for the payra bridge for a long time. The ECNEC project for the construction of the bridge was approved on May 8, 2012. It took nine years to complete the 5 year project, the cost has tripled.

The government hopes that the launch of this long-awaited bridge will further expand trade and commerce in the southern part of the country and accelerate the economic activities of the Payra Port.