Headlines
Redwan Rahman graduates from FilmdomThe local government minister has instructed to cut the road if necessary to remove the waterRequest to withdraw closure shop at night till EIDThe days of the Western monolithic world are over: PutinLeaders of Germany, France, and Italy in Kyiv to express solidarity‘Presidents of two countries call and pressurized Mbappé’Two U.S. citizens are thought to be missing or taken prisoner in UkraineCOVID: The technical committee suggested lifting some restrictionsPetrol prices hit record highs in the USCanada wants a stern warning against cigarettesThe task force to protect the mountains, demanded the formation of a speedy trial tribunalDepot fire: CID tries to find the cause on CCTVRussian passports are being issued in occupied UkraineFire on Parabat Express: Railroad to Sylhet is normal after 4 hoursAnother 24 children died in Mariupol, Ukraine said
Home Country The people of Sylhet have not seen such a flood in a...
Facebook
Twitter
WhatsApp
Print 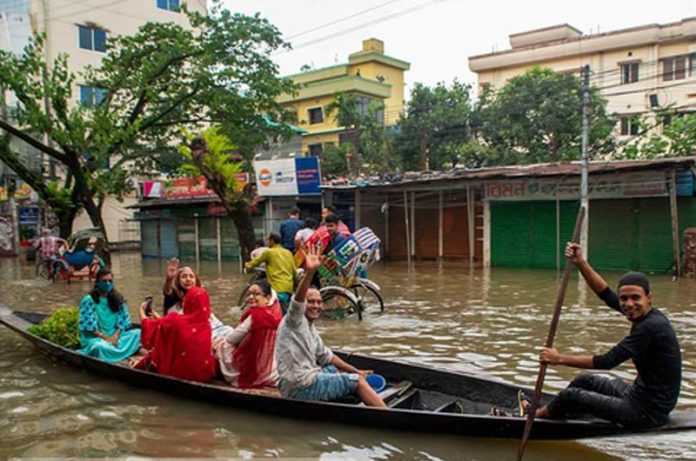 Sylhet Representative: Houses, furniture, and cattle were washed away by the floodwaters in the upper reaches and heavy rains; The crisis of food and clean water is increasing with water. The people of Sylhet have not seen such a terrible flood for many days.

Ramzan Ali, 60, of Alirgaon village in Gowainghat Upazila of Sylhet, remembers the previous floods in 2004. He is worried about whether the situation will get worse this time.

According to the district administration, 85 unions in 13 Upazilas of Sylhet have been flooded. 328 shelters have been opened.

But even there, the asylum seekers are talking about the crisis of clean water and food. Ramzan Ali commented that the waterlogged people are seeing ‘darkness in their eyes.

The house of Rashida Begum, a resident of East Rangpur slum in Kompaniganj Upazila of Sylhet, has been submerged in floodwaters. She took shelter in her brother-in-law’s house with her four children. But when the raw house surrounded by water on all four sides breaks down, he does not sleep because of this fear. There is also the infestation of snakes.

Rashida said, “I can’t sleep at night for fear. The snake comes into the house. There is no food in the house. I am in danger with my four children. ”

Elderly Rumina Akhter has come to Thanabazar Shelter as the house of Kanthalbari Government Shelter Project in Companiganj was submerged in floodwaters.

He went to the shelter empty-handed as everything was submerged due to the sudden downpour, but he was not relieved there either. He said that he got help from a packet of chira and molasses.

“The floods have taken away everything. Even after coming to the shelter now, the hunger of the stomach is not satisfied. I am not getting much relief from the government. There is no way for the poor. Now I am worried about how I will survive in the days to come. ”

The border Upazilas have been flooded due to sudden landslides. Residents of Border Upazila Companiganj, Gowainghat, Jaintapur, Zakiganj, and Kanaighat are going through miserable days. Due to the floodwater on the road, people’s movement is stopped. The schools are closed.

Abdul Karim of Laxmi Prasad Union in Kanaighat said the school was closed for about two years due to the epidemic. Now the school is closed due to a sudden flood.

Water Development Board Sylhet Assistant Engineer Niloy Pasha said that so far 34 dams of Surma-Kushiyara river have been breached in the Sylhet district.

“Water has risen in Companyganj, Gowainghat, and Kanaighat Upazila complexes. Many flood shelters in these Upazilas are also in dire straits due to rising water, ” said Niloy.

The Water Development Board’s Flood Forecasting and Warning Center says the water levels in major rivers of the Upper Meghna Basin in the northeastern part of the country, except Surma-Kushiyara, are rising, which could continue for the next 24 hours.

In the next 24 hours, the river level in Sunamganj, Netrokona, and Habiganj districts in the northeast of the country may cross the danger line in some places.

The flood situation in Sylhet district may improve somewhat at this time, but it may worsen in some parts of the lower reaches of Sunamganj district.

Drinking water is a major crisis for flood-affected people. There is no way to get pure water as the tubewell is submerged.

Abul Hossain of six villages of Ghat in Jaintapur Upazila said, “Tubewells are also underwater. No electricity. There is no drinking water. I am drinking haor water with purification tablets, I have to save my life. ”

Like the Upazilas, Sylhet metropolis has also taken a turn for the worse. City dwellers are facing a water crisis due to a lack of electricity. Can’t cook due to knee water inside the house in the low-lying area.

Afzal Karim, a resident of Taltola area of ​​the city, said his house has been flooded for the last three years. Various items including emergency papers have been damaged.

“I sent the family members to the relatives’ house as water was rising in the house. I got up at a nearby residential hotel to look after it. “

Meanwhile, Rahman Mia of the suburban area said that he was suffering from the stench of floodwater in the city.

Anamika Das, a resident of Sheikhghat slum in the city, said, “There is water in the whole house. There was an earthen stove that also sank, I can’t cook. There is no drinking water. A relative of mine cooked some food and brought it, that is what I ate yesterday. I don’t know what to do tonight. “

The same is true of the slum dwellers in different parts of the flooded city. Ajmal Hossain, a resident of the Jatarpur area of ​​the city, said that water was flowing in front of the house. The house is on the second floor.

“But when I get out of the house, my knees water. The water is constantly rising. I have never seen water rise so fast before. The situation is getting worse. “

Sylhet Deputy Commissioner Mojibar Rohsan said 85 unions in 13 Upazilas of the district have been flooded. 326 shelters have been opened. At present, 7,349 people have taken shelter in 95 shelters.

He said the shelters were being provided with dry food and necessary assistance, adding that TK 13 lakh, 234 metric tonnes of rice, and 3,099 packets of dry food had been provided to the flood victims in Sylhet metropolis and Upazilas.