Headlines
The local government minister has instructed to cut the road if necessary to remove the waterRequest to withdraw closure shop at night till EIDThe days of the Western monolithic world are over: PutinLeaders of Germany, France, and Italy in Kyiv to express solidarity‘Presidents of two countries call and pressurized Mbappé’Two U.S. citizens are thought to be missing or taken prisoner in UkraineCOVID: The technical committee suggested lifting some restrictionsPetrol prices hit record highs in the USCanada wants a stern warning against cigarettesThe task force to protect the mountains, demanded the formation of a speedy trial tribunalDepot fire: CID tries to find the cause on CCTVRussian passports are being issued in occupied UkraineFire on Parabat Express: Railroad to Sylhet is normal after 4 hoursAnother 24 children died in Mariupol, Ukraine saidBelayet, who is in his fifties, has been given a good admission test against young
Home Country The Prime Minister is going to France on an official visit after...
Facebook
Twitter
WhatsApp
Print 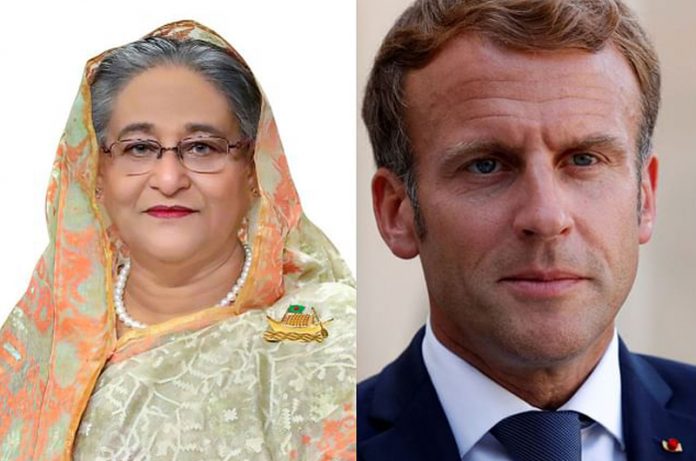 This time the official tour is for five days. At the beginning of her visit, Prime Minister Sheikh Hasina will hold a bilateral meeting with French President Emmanuel Macho at the Alice Palace in Paris.

The diplomats said the forthcoming meeting of the two top leaders could pave the way for a new roadmap for cooperation ahead of the completion of five decades of Bangladesh-France relations.

Besides, Sheikh Hasina is preparing to exchange views with top businessmen of France calling for investment in Bangladesh.

During the visit, Sheikh Hasina will hand over the UNESCO-Bangladesh Bangabandhu Sheikh Mujibur Rahman International Award for her contribution to the creative economy on November 11. In honour of Bangabandhu, UNESCO introduced this award in 2020 with the funding of Bangladesh.

On the last day of the visit, Prime Minister Sheikh Hasina is scheduled to attend a meeting of the Paris Peace Forum.

Foreign Secretary Masood bin Momen told Prothom Alo on Saturday that the two leaders would hold a formal meeting at the Alice Palace on November 9. After the 50th anniversary of Bangladesh’s independence and the departure of the United Kingdom from the European Union, we want to bring about a qualitative change in relations with European countries, including France and Germany. Considering the issue, the meeting of the two top leaders may have a direction on where our relationship will go in the future. We are interested in discussing issues of bilateral cooperation as well as international or multilateral cooperation.

Masoud bin Momen said the risks of climate change would be discussed at a meeting in Paris after the Glasgow climate summit. Especially since Joe Biden came to power as US President, the United States has taken steps to implement the Paris Climate Agreement. Bangladesh is now the president of the CVF, an alliance of countries at risk of climate change. Naturally, the issue of climate change will be important in the meeting of the two top leaders.

A new twist in the relationship

France is one of the countries that recognized Bangladesh immediately after the liberation war of 1971.

The French philosopher Andr মাল Malraux made a special contribution to the formation of international public opinion in support of the liberation war of Bangladesh.

In February 1972, France recognized Bangladesh as an independent country.

After the visit of the then President of France Franোয়াois Mitterrand to Bangladesh in 1990, a turning point began in the relations between the two countries. Sheikh Hasina paid her first official visit to Paris in 1999 when she was the Prime Minister.

Sheikh Hasina visited Paris for the last time in December 2016 to attend the One Planet Summit. On the sidelines of the visit, he met with French President Emmanuel Macho.

Bangladesh is ahead in terms of import-export trade between the two countries. According to French statistics, bilateral trade in 2016 was 2.6 billion euros. Of this, Bangladesh’s exports amount to more than 2 billion euros. 90% of Bangladesh’s exports to France are readymade garments. The remaining 10 per cent is leather goods, frozen fish and medicines. Bangladesh imports car and aircraft equipment, beverages and food chemicals from France.

A significant French investment in Bangladesh is Lafarge Surma Cement. Besides, Total, a well-known French energy producer, has set up a factory in Chittagong. Famous French companies like Aventis, Edex, Danone and Viola have investments in Bangladesh.

Since 2012, the French Agency for International Development (AFD) has been working with the garment industry to develop Bangladesh’s infrastructure as well as to ensure environment-friendly development. France has opened embassies with Germany in the same building in different parts of the world to save money. The first Franco-German embassy was opened in Dhaka, the capital of Bangladesh.