Headlines
Redwan Rahman graduates from FilmdomThe local government minister has instructed to cut the road if necessary to remove the waterRequest to withdraw closure shop at night till EIDThe days of the Western monolithic world are over: PutinLeaders of Germany, France, and Italy in Kyiv to express solidarity‘Presidents of two countries call and pressurized Mbappé’Two U.S. citizens are thought to be missing or taken prisoner in UkraineCOVID: The technical committee suggested lifting some restrictionsPetrol prices hit record highs in the USCanada wants a stern warning against cigarettesThe task force to protect the mountains, demanded the formation of a speedy trial tribunalDepot fire: CID tries to find the cause on CCTVRussian passports are being issued in occupied UkraineFire on Parabat Express: Railroad to Sylhet is normal after 4 hoursAnother 24 children died in Mariupol, Ukraine said
Home More Environment The Prime Minister sought ADB assistance in implementing the Delta Plan
Facebook
Twitter
WhatsApp
Print 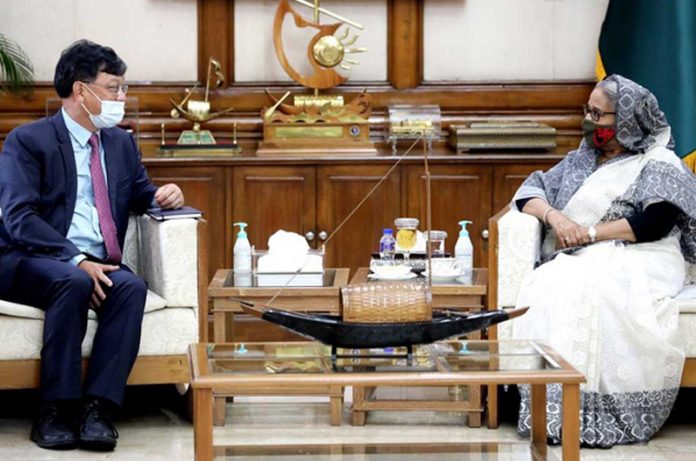 The Prime Minister expressed his expectations in this regard when ADB Vice President (Operation-1) Shijin Chan paid a courtesy call on Ganobhaban on Monday.

The Prime Minister also sought the role of ADB in enhancing cooperation in regional cooperation, connectivity, trade facilitation, and energy.

Emphasizing regional connectivity for development, the Prime Minister said, “Bangladesh’s door is open for the development of connectivity.” In this context, he said that some routes which were closed after the war in 1975 should be re-opened.

Besides, the Prime Minister hoped that Bangladeshis would be given more importance in recruiting top-level ADBs to maintain regional balance.

“After almost two years, the people of the country have celebrated EID freely,” she said.

Sheikh Hasina also lauded the ADB for extending a helping hand in the COVID epidemic. And in the midst of the epidemic, praise for the economic development of Bangladesh under his leadership came from the ADB Vice President.

Shijin Chan said Bangladesh has been able to keep the wheel of the economy moving. Bangladesh has set an ‘example’ in tackling the Covid-19 epidemic.

“ADB will always stand by Bangladesh and assist in rural and urban development.”

Regarding Bangladesh’s transition from the least developed country to a developing country like Qatar, the ADB Vice President said, “This time is usually critical. Bangladesh is doing well.”

In this context, Sheikh Hasina said, the government has taken various programs to address the challenges of this transition period.

He also mentioned the need to bring 100% of the people of Bangladesh under the electricity facility and to provide land and houses to the landless and homeless under the Asrayan-2 project.

Sheikh Hasina said the quality of life of the people has improved as a result of these initiatives. Bangladesh has also made progress in the field of information and technology.

The ADB Vice President raised the issue of the global food crisis due to the Russia-Ukraine war. Sheikh Hasina then said that her government has undertaken more food production programs.

Praising Bangladesh’s progress, the ADB Vice President said, “Bangladesh has made tremendous progress in the field of agriculture.”

Shijin Chan hopes that the work that Bangladesh has done to build 100 economic zones will meet the demand of domestic and international markets.