Headlines
Redwan Rahman graduates from FilmdomThe local government minister has instructed to cut the road if necessary to remove the waterRequest to withdraw closure shop at night till EIDThe days of the Western monolithic world are over: PutinLeaders of Germany, France, and Italy in Kyiv to express solidarity‘Presidents of two countries call and pressurized Mbappé’Two U.S. citizens are thought to be missing or taken prisoner in UkraineCOVID: The technical committee suggested lifting some restrictionsPetrol prices hit record highs in the USCanada wants a stern warning against cigarettesThe task force to protect the mountains, demanded the formation of a speedy trial tribunalDepot fire: CID tries to find the cause on CCTVRussian passports are being issued in occupied UkraineFire on Parabat Express: Railroad to Sylhet is normal after 4 hoursAnother 24 children died in Mariupol, Ukraine said
Home Country The proposal to make the fairy hill a ‘heritage’, the government office...
Facebook
Twitter
WhatsApp
Print 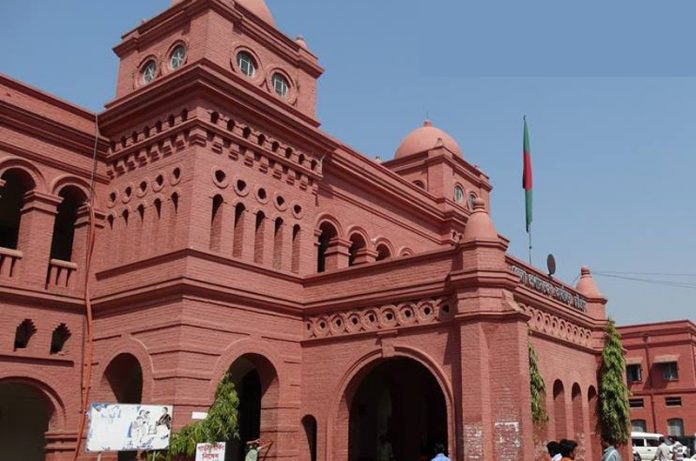 Staff Reporter: The Ministry of Culture is considering a proposal to preserve Chittagong’s Parir Pahar as an archeological site amid a dispute between the district administration and the Bar Association over the construction of a new facility.

Besides, the district administration has proposed to declare the 130-year-old two-story court building in Pari Parhar as a ‘heritage’.

The design of the proposed ‘integrated office building construction project’ may be finalized this month. The project may take three to four years to complete.

In the meantime, the Prime Minister has agreed to a proposal from the Cabinet Division not to build new installations on the Parir hill and to remove illegal installations.
On August 29, the Chittagong district administration sent a letter to the Ministry of Culture regarding the removal and renovation of illegal structures in Pari Parhar.

If you want to know the Joint Secretary of the Ministry of Culture (Archeology and Museum Branch) said. Ataur Rahman said, “I have filed the matter of Pari Parhar, action will be taken as per the decision from above. If the government thinks that the Ministry of Culture will take the responsibility, then it will. It is a matter of the above decision. When the file comes from above, then the details can be told. ”

And Chittagong Deputy Commissioner Mohammad Mominur Rahman said, “In the light of the rich history and heritage of Bangladesh, we hope that it (old court building) will be declared a heritage under the Archaeological Preservation Act. Initiatives will be taken to preserve and renovate this building for future generations.

The old court building was built on the top of Pari hill in 1893-94. When the initiative was taken to demolish the old building, a civil society movement was formed in Chittagong to preserve the heritage.

Asked how the court and related activities would be conducted if the entire fairy hill was declared a heritage, the deputy commissioner said, “The court proceedings will continue. The Ministry of Culture will decide whether any of the buildings and parts of the hill will be preserved as heritage. “

The destination is on the banks of Karnafuli

Deputy Commissioner Mohammad Mominur Rahman said that many people are suffering due to the fact that each office is located in one place. Many government offices do not even have their own buildings. That is why the Prime Minister has already taken up a project called ‘Integrated Office Building Construction Project’.

Preliminary work on the project has started in January this year. The land has been earmarked under Bangabandhu Maritime University at Kalurghat under the city’s Chandgaon circle. The project will be implemented on 63 acres of khas land there.

The deputy commissioner said, “The draft has been planned. The design may be finalized on September 23. Then the work of formulating DPP will start. In the next three to four years, all the service seekers in Chittagong will get all the government services in one place. ”

In 1889, the British government bought this hill known as ‘Fairy Hill’ from Akhil Chandra. In 1893-94, a two-story court building was constructed in the style of the Writers’ Building at a cost of six lakh rupees.

Naveen Chandra Sen, a personal assistant to the then divisional commissioner who applied to the British government for the construction of the building, wrote in his autobiography that he had proposed to build a large building on Pari hill to house all the offices of commissioners, judges, collectors, and magistrates.