Headlines
Redwan Rahman graduates from FilmdomThe local government minister has instructed to cut the road if necessary to remove the waterRequest to withdraw closure shop at night till EIDThe days of the Western monolithic world are over: PutinLeaders of Germany, France, and Italy in Kyiv to express solidarity‘Presidents of two countries call and pressurized Mbappé’Two U.S. citizens are thought to be missing or taken prisoner in UkraineCOVID: The technical committee suggested lifting some restrictionsPetrol prices hit record highs in the USCanada wants a stern warning against cigarettesThe task force to protect the mountains, demanded the formation of a speedy trial tribunalDepot fire: CID tries to find the cause on CCTVRussian passports are being issued in occupied UkraineFire on Parabat Express: Railroad to Sylhet is normal after 4 hoursAnother 24 children died in Mariupol, Ukraine said
Home More Education The question was not leaked on WhatsApp, it is a rumor: DU...
Facebook
Twitter
WhatsApp
Print 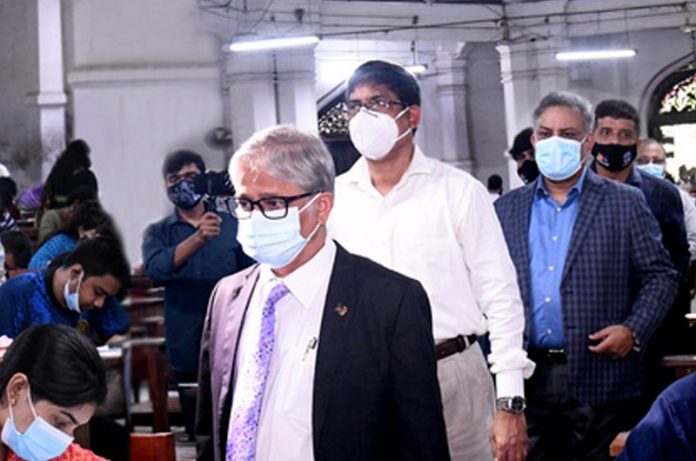 He was responding to a question from reporters after inspecting the admission test center on Wednesday.

Keeping in mind the epidemic situation, this test is being taken for the first time in eight university campuses of eight divisional cities of the country including Dhaka University to reduce the suffering of the students.

Question papers have been delivered to all the centers one day before the admission test on Friday. The scandal of a WhatsApp group spread through social media the night before as questions of the ‘A’ unit was being provided in exchange for money.

Asked about this, the Vice-Chancellor said, “The rumors that the admission test questions are being leaked through the WhatsApp group are rumors. Members of the law enforcement agencies are taking action against the rumor mongers.

“It is our firm commitment to eradicate all forms of fraud. We have already done that. We have canceled 79 students who were cheated at different times and brought them under the law. ”

He requested the parents not to crowd the test center, keeping in mind the epidemic situation.

The admission test of the ‘B’ unit of the Faculty of Arts of Dhaka University will be held tomorrow, October 2.

Then on 22nd October, the admission test will be held in the ‘C’ unit of the Faculty of Business Education and on 23rd October in the ‘D’ unit of the Department of Social Sciences.