Headlines
Redwan Rahman graduates from FilmdomThe local government minister has instructed to cut the road if necessary to remove the waterRequest to withdraw closure shop at night till EIDThe days of the Western monolithic world are over: PutinLeaders of Germany, France, and Italy in Kyiv to express solidarity‘Presidents of two countries call and pressurized Mbappé’Two U.S. citizens are thought to be missing or taken prisoner in UkraineCOVID: The technical committee suggested lifting some restrictionsPetrol prices hit record highs in the USCanada wants a stern warning against cigarettesThe task force to protect the mountains, demanded the formation of a speedy trial tribunalDepot fire: CID tries to find the cause on CCTVRussian passports are being issued in occupied UkraineFire on Parabat Express: Railroad to Sylhet is normal after 4 hoursAnother 24 children died in Mariupol, Ukraine said
Home Headlines The shelling began after civilians were evacuated from the Mariupol factory
Facebook
Twitter
WhatsApp
Print 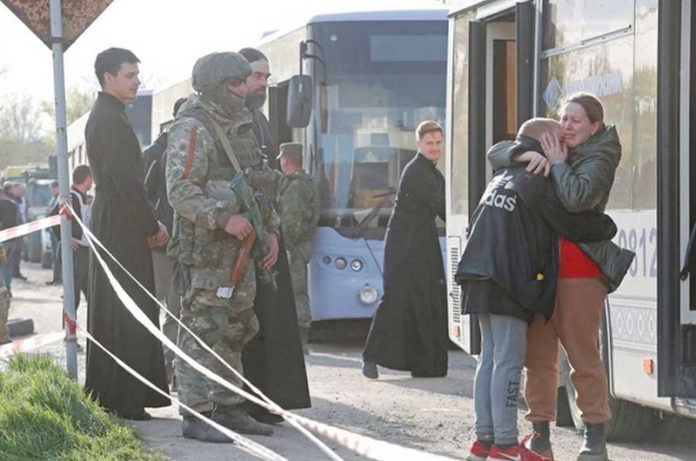 On Monday, charities began working to evacuate more civilians from the devastated Ukrainian city, but hundreds more were trapped inside the Azvastail factory, Reuters reported.

The first group of civilians to leave Mariupol is expected to arrive in the Ukrainian-controlled town of Zaporizhzia, 230 kilometers northwest of the city. But those trapped in the steel plant are said to have run out of water, food, and medicine.

With about 2,000 Ukrainian troops stationed in the maze of underground bunkers and tunnels at the huge Soviet-era factory, the protected bunkers continue to protect them from weeks of Russian shelling and bombardment.

A regional governor of Ukraine says Russia is also carrying out massive bombings in eastern Ukraine on Monday.

After Russian forces failed to capture the Ukrainian capital, Kiev, they are now focusing on the east and south of the country. In the meantime, they have almost completely taken over the southern Ukrainian city of Kherson, as well as the port city of Mariupol on the shores of the Azov Sea. Through this, they have made connections between the occupied territories of Russia in the west and in the east.

But they have not yet been able to take control of the Mariupol steel plant, although some civilians have been evacuated in the past two days under UN mediation, thousands of troops remain.

President Zhelensky said on Sunday that about 100 civilians had been evacuated from the Azovstyle steel plant in Mariupol and were on their way to the Ukrainian-controlled city of Zaporizhiya. They are expected to arrive in the city on Monday morning.

In a tweet, he said, “The first group of about 100 people has already started moving towards the controlled area. We will meet with them in Zaporizhiya tomorrow (Monday). “

“This is the first time in the region that we have observed a two-day ceasefire,” Zelensky said in a night video. At that time, I was able to bring out hundreds of civilians, including women and children. ”

He hopes the situation will allow more people to move on.

A Reuters photojournalist reports that a group of more than 50 civilians from Mariupol had taken refuge in a makeshift camp in the Russian-controlled village of Bejimanne, 30 kilometers east of the city. He said they arrived in the village by bus with UN and Russian troops.

Video footage from inside the steel plant shows members of Russia’s so-called neo-Nazi group, the Azov Regiment, helping to wreck civilians on buses.

But Koyesh civilians are still reported to be trapped with the troops there. An old woman who came out of the factory with a small child said that the survivors were running out of food.

“Children always want to eat. You know, adults can wait, “he said.

Petro Andreyschenko, an aide to the mayor of Mariupol, said on Ukrainian state television that “shelling of civilians began again yesterday as soon as the buses left Azovstyle.”

The Red Cross said it was working with UN, Ukrainian and Russian officials to evacuate civilians from Mariupol.