Headlines
The local government minister has instructed to cut the road if necessary to remove the waterRequest to withdraw closure shop at night till EIDThe days of the Western monolithic world are over: PutinLeaders of Germany, France, and Italy in Kyiv to express solidarity‘Presidents of two countries call and pressurized Mbappé’Two U.S. citizens are thought to be missing or taken prisoner in UkraineCOVID: The technical committee suggested lifting some restrictionsPetrol prices hit record highs in the USCanada wants a stern warning against cigarettesThe task force to protect the mountains, demanded the formation of a speedy trial tribunalDepot fire: CID tries to find the cause on CCTVRussian passports are being issued in occupied UkraineFire on Parabat Express: Railroad to Sylhet is normal after 4 hoursAnother 24 children died in Mariupol, Ukraine saidBelayet, who is in his fifties, has been given a good admission test against young
Home Sports The Sri Lankan team wants to give a touch of relief to...
Facebook
Twitter
WhatsApp
Print 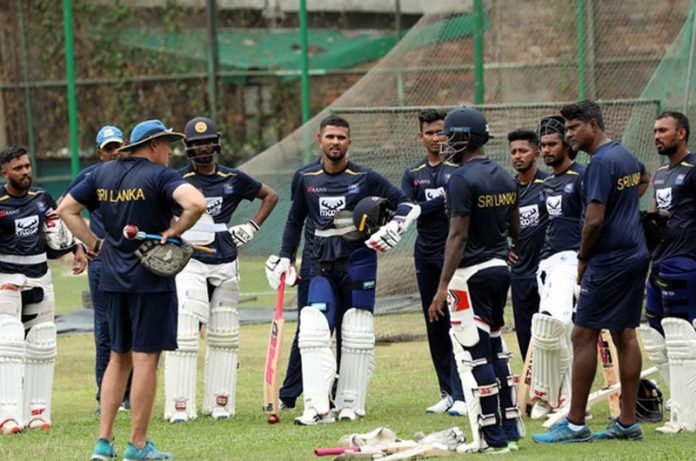 Sports Reporter: News of the resignation of Prime Minister Mahinda Rajapaksa is coming out of the country. Time will tell whether the ongoing crisis will lead to a solution or intensify. But the Sri Lankan cricketers have done their job. With the performance on the cricket field during the Bangladesh tour, they want to put a smile on the face of the countrymen who are in a very difficult time.

After arriving in Dhaka on Sunday, the Lankans practiced for the first time on Monday at the Sher-e-Bangla Stadium in Mirpur. Their practice lasts a long time from morning to noon. They also saw a lot of secrecy in the first day’s practice. They did not leave the practice session open for the journalists.

Later, however, the team’s assistant coach Naveed Nawaz confronted the media. The former left-arm batsman said the country’s financial and political instability had not affected the preparation of the cricket team.

“It simply came to our notice then. Most of the cricketers were busy with cricket activities. They have continued to work hard. They have been practicing for a couple of months. I have not seen any evidence of influencing cricketers so far. ”

Although the impact of the crisis did not fall on cricket, the impact of cricket can make an impression on people even in times of crisis. Naveed Nawaz said, as a team, they know this reality.

“There is not much positive in the country at the moment. So it would be great to be able to return to the country as a team with some positivity so that the young generation of the country can be encouraged. That’s the decent thing to do, and it should end there. “

This time Naveed Nawaz came to Bangladesh as a part of Sri Lanka’s coaching staff, but this is a well-known face in the country’s cricket. It can be said that his name has been engraved in the history of cricket in Bangladesh. The country’s first global title came into his hands! Under his coaching and close supervision, Bangladesh became the champion in the 2020 U-19 World Cup.

After that success, he was also given the responsibility of the Bangladesh team for the 2022 Youth World Cup. This time, however, the previous success was not repeated. Then he received a call from the country. The 48-year-old former cricketer is happy to be able to return to his homeland with a bigger responsibility after coaching Bangladesh for a long time.

The Sri Lankan team, which has been going through a lot of turmoil for some time, has also made some changes in the tour squad. Chris Silverwood’s coaching is also starting a new path for them. Nawaz thinks that there is a good combination of new and experienced cricketers in the team. His idea is that the main fight in this series will be with the batting of the two teams.

“Our team is good. There are a few experienced ones with quite a few youngsters. I would say, there is a combination of experience and youth in the team. Win-loss depends on the performance of the given day. We are very positive and confident that these guys will be able to do their best on the field. ”

The conditions of Sri Lanka and Bangladesh are already close. The Lankans also come to this country on regular visits. The Lankans are also a regular face in domestic cricket here. A few days ago, Dhananjaya de Silva and Kusal Mendis played in the Dhaka Premier League. All this will work positively for Sri Lanka, hopes Nawaz.

“As a visiting team, we will always rely on our previous experience. We have some cricketers who are accustomed to this condition, some have played in various tournaments including Dhaka Premier League and BPL. Some have even played cricket in our last Test series in Bangladesh. Everyone is waiting with optimism and an open mind, no matter what comes next. ”

After the one-day practice, the Lankans will play a two-day warm-up match against the BCB XI at BKSP on Tuesday and Wednesday. The Test series starts with the Chittagong Test next Sunday.