Headlines
Redwan Rahman graduates from FilmdomThe local government minister has instructed to cut the road if necessary to remove the waterRequest to withdraw closure shop at night till EIDThe days of the Western monolithic world are over: PutinLeaders of Germany, France, and Italy in Kyiv to express solidarity‘Presidents of two countries call and pressurized Mbappé’Two U.S. citizens are thought to be missing or taken prisoner in UkraineCOVID: The technical committee suggested lifting some restrictionsPetrol prices hit record highs in the USCanada wants a stern warning against cigarettesThe task force to protect the mountains, demanded the formation of a speedy trial tribunalDepot fire: CID tries to find the cause on CCTVRussian passports are being issued in occupied UkraineFire on Parabat Express: Railroad to Sylhet is normal after 4 hoursAnother 24 children died in Mariupol, Ukraine said
Home Country The task force to protect the mountains, demanded the formation of a...
Facebook
Twitter
WhatsApp
Print 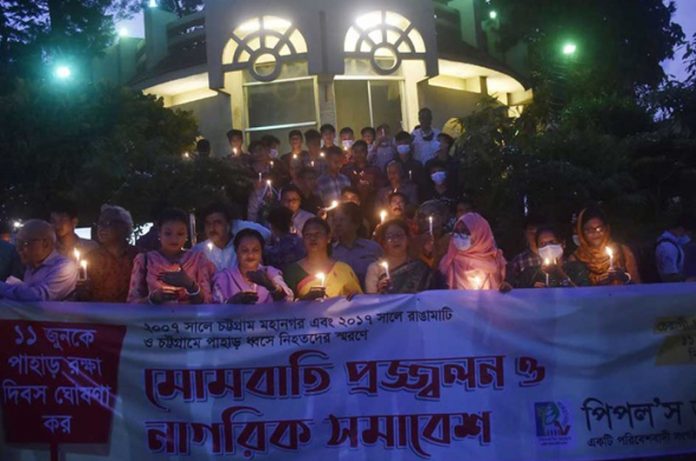 Chittagong Bureau: The demand for the formation of a task force and a tribunal for the speedy trial came up from a rally.

On Saturday afternoon, the environmental organization People’s Voice organized a rally at the corner of Cheragi hill in the port city.

The rally was organized on June 11, 2007, in Chittagong metropolis and in 2017 in Rangmati and Chittagong in memory of the victims of the landslide.

Raising five demands on behalf of the organization, President Sharif Chauhan said, “The list of those who have occupied the hills was made by the hill protection committee. No action has been taken against anyone even today. The hill management committee has not been successful for so many years. If such a high-level committee is not successful, then who is succeeding?

Demanding a concerted effort by all government agencies, he said, “We need to form a task force with all those involved, including law enforcers, the environment, and the land.” The mountaineers have to be tried in a special tribunal.

“Because witnesses do not appear in the environmental court. As a result, the main hotara got across. Only poor Matikata workers are punished. ”

Other demands include declaring June 11 as National Mountain Protection Day, implementing the recommendations of the inquiry committee formed in 2007, and conducting all development activities to protect the environment.

President of the Professional Coordination Council. AQM Sirajul Islam said, “So far we have seen hundreds of investigation committees. It does not forget the human mind. The mountains are a natural resource not only for Chittagong but for the whole country.

“The hill has been cut down, today Karnafuli is on the way to be filled. This is not just a mountain cutting, it is a deep conspiracy to destroy our nature. If the government officials do not come down to the people and protect the mountain river, there is danger ahead. ”

CPB Chittagong District President Prof Ashok Saha said Occupancy, death, and looting do not stop. I am in such a situation.

“People in power do not suffer from so much looting, ordinary people die. A bleak future awaits us. Everyone must come forward to resist. “

Engineer Delwar Majumder, former president of the Institute of Engineers in Chittagong, said, “Independence gained at the cost of millions of lives. But the people today do not feel ownership of the country. The country must be saved from the hands of obscene and cruel profiteers. If the back is against the wall, there will be a flood of people’s anger. ”

Commenting that anti-politics and anti-businessmen are involved in all activities, Professor Muhammad Idris Ali said, “I will call on the Prime Minister to stop the misdeeds that are taking place in Chittagong. The people of Chittagong are vulnerable today. These do not go with your development process. It can’t go on like this. ”

Poet and journalist Kamrul Hasan Badal said, “When the mountains are cut, the poor are judged. There is no justice for the rich. Those who live at the foot of the mountain are poor people. They even died when the mountain collapsed. In this city, when the government agency CDA builds the Bayezid Link Road and cuts the hills, the rest are encouraged. ”

Artist Rashed Hasan, president of Proma Avrtti, said, “The mountains are being cut down as there is no punitive action against the culprits behind the scenes.” We demand that the culprits in the BM Depot incident in Sitakunda be brought to justice by a speedy trial tribunal. ”