Headlines
Redwan Rahman graduates from FilmdomThe local government minister has instructed to cut the road if necessary to remove the waterRequest to withdraw closure shop at night till EIDThe days of the Western monolithic world are over: PutinLeaders of Germany, France, and Italy in Kyiv to express solidarity‘Presidents of two countries call and pressurized Mbappé’Two U.S. citizens are thought to be missing or taken prisoner in UkraineCOVID: The technical committee suggested lifting some restrictionsPetrol prices hit record highs in the USCanada wants a stern warning against cigarettesThe task force to protect the mountains, demanded the formation of a speedy trial tribunalDepot fire: CID tries to find the cause on CCTVRussian passports are being issued in occupied UkraineFire on Parabat Express: Railroad to Sylhet is normal after 4 hoursAnother 24 children died in Mariupol, Ukraine said
Home Country The thought of ‘tying’ the price of the rod
Facebook
Twitter
WhatsApp
Print 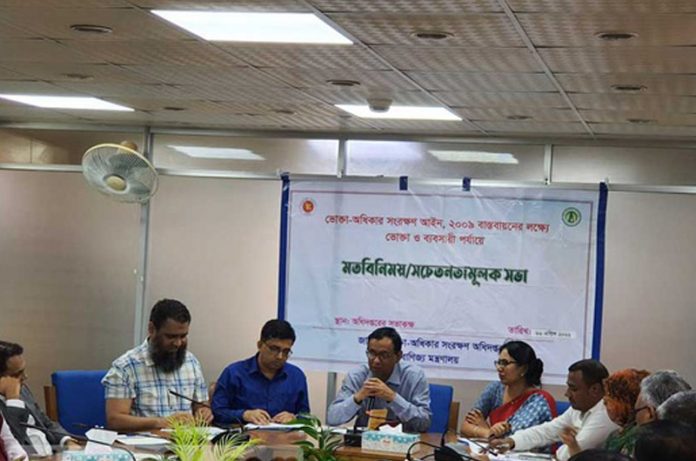 Staff Reporter: The government has taken the initiative to form a committee to find a way to fix ‘reasonable’ and ‘uniform’ prices to restore order in the volatile rod market.

On Tuesday, a meeting was held at the head office of the Department of Consumer Protection in Karwan Bazar with a delegation of construction businessmen and rod traders.

Representatives of the Bangladesh Steel Manufacturers Association, Rod retailers, Bangladesh Association of Construction Industries were present at the meeting.

After the meeting, AHM Safiquzzaman Zaman, Director General of the Department of Consumer Protection and Additional Secretary to the Ministry of Commerce, said a committee would be formed to work out a uniform pricing system.

“That committee will recommend a uniform pricing system in line with the international market. We expect a report from this committee by May 30, ” he said.

The committee will include representatives from the Department of Consumer Protection, Tariff Commission, Consumers Association of Bangladesh Cab, ICMAB, Steelmill Owners, Rod Vendors, and BUET’s Department of Mechanical Engineering.

Recently, the price of this material, which is one of the main construction works, has increased from TK 30,000 per tonne to TK 90,000 to 92,000. At one point in the last three months of rising prices, Ukraine has jumped sharply since the start of the war.

Regarding the control of rising prices of rods, AHM Safiquzzaman said, “Government agencies have not done enough work on how to determine the reasonable price of rods.

“That is why a full review can be carried out. We have already done a review on edible oil. “

Earlier, the Department of Consumer Affairs raided several rod markets, including English Road in Dhaka, to restore order in the rod market, one of the raw materials of the construction industry.

“But for clarity, the unit price has to be mentioned as SO. It has been seen that the price of this product fluctuates by 2/3 thousand rupees per ton in the morning and afternoon. That means there is something to be done to restore order. “

The CAB representative said that the selling price and profit limit of each product, including the rod should be fixed. And these values ​​should be displayed in front of the common people.