Headlines
Redwan Rahman graduates from FilmdomThe local government minister has instructed to cut the road if necessary to remove the waterRequest to withdraw closure shop at night till EIDThe days of the Western monolithic world are over: PutinLeaders of Germany, France, and Italy in Kyiv to express solidarity‘Presidents of two countries call and pressurized Mbappé’Two U.S. citizens are thought to be missing or taken prisoner in UkraineCOVID: The technical committee suggested lifting some restrictionsPetrol prices hit record highs in the USCanada wants a stern warning against cigarettesThe task force to protect the mountains, demanded the formation of a speedy trial tribunalDepot fire: CID tries to find the cause on CCTVRussian passports are being issued in occupied UkraineFire on Parabat Express: Railroad to Sylhet is normal after 4 hoursAnother 24 children died in Mariupol, Ukraine said
Home International The twin blasts in Kiev during the UN Secretary General’s visit
Facebook
Twitter
WhatsApp
Print 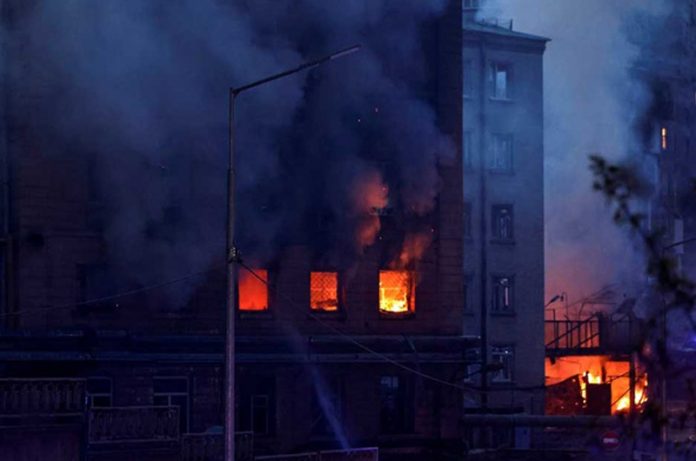 News Desk: The bomber struck shortly after noon in the Ukrainian capital, Kiev, in the presence of UN Secretary-General Antonio Guterres.

Reuters eyewitnesses at the news agency heard the two blasts but could not independently verify the cause. Russia has not commented on the blast.

But Ukrainian officials have claimed that Russia fired two missiles at Kiev on Thursday in the run-up to the UN Secretary-General’s visit.

They said the two rockets shook the Shevchenko area of ​​Kiev and a rocket hit the ground floor of a 25-story residential building, injuring at least 10 people.

Russia withdrew its forces from Kiev in early April after failing to capture the Ukrainian capital, and since then top officials from the United States and its European allies have visited the city.

The two blasts were heard shortly after Guterres ended his meeting with Ukrainian President Volodymyr Zelensky on Thursday. This raises concerns that Kiev is still at risk of being attacked by Russia’s heavy weapons, according to Reuters.

Asked about the blast, Guterres told Portuguese media RTP: “I am shocked by the attack in Kiev. It is not because I am here, but because Kiev is a holy city for Ukrainians and Russians alike.”

“This explosion proves that our vigilance cannot be ignored,” Zelensky said. We should not think that the war is over. ”

In talks with Guterres in Moscow on Tuesday, Putin agreed in principle to involve the United Nations and the Red Cross in evacuating people from the factory. But the idea of ​​Ukrainian officials, Russia wants to catch those trapped in the steel plant; However, Moscow has said it has no such plans.

The outcome of the war could be determined by the Western concept of war between Mariupol and the wars in the east and south of Ukraine.