Headlines
The local government minister has instructed to cut the road if necessary to remove the waterRequest to withdraw closure shop at night till EIDThe days of the Western monolithic world are over: PutinLeaders of Germany, France, and Italy in Kyiv to express solidarity‘Presidents of two countries call and pressurized Mbappé’Two U.S. citizens are thought to be missing or taken prisoner in UkraineCOVID: The technical committee suggested lifting some restrictionsPetrol prices hit record highs in the USCanada wants a stern warning against cigarettesThe task force to protect the mountains, demanded the formation of a speedy trial tribunalDepot fire: CID tries to find the cause on CCTVRussian passports are being issued in occupied UkraineFire on Parabat Express: Railroad to Sylhet is normal after 4 hoursAnother 24 children died in Mariupol, Ukraine saidBelayet, who is in his fifties, has been given a good admission test against young
Home More Expatriation The US spy agency wants to “restore democracy”
Facebook
Twitter
WhatsApp
Print 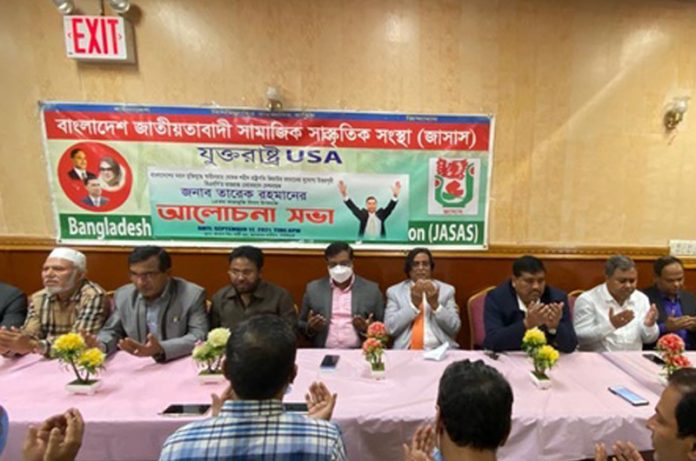 News Desk: The United States branch of the BNP’s affiliate, the Nationalist Sociocultural Organization (JASAS), has called for a movement against party leaders and activists to restore democracy in Bangladesh.

They met at an auditorium in Jackson Heights, New York, on Sunday night, local time.

Mamun Ahmed said, “BNP has to be put in power in the interest of freedom of speech and freedom of media of the people of Bangladesh. Because multi-party democracy was revived through BNP. ”

Helal Khan said, “In order to restore democracy in Bangladesh and bring the abuses of state power to justice, a brutal movement led by the BNP must be started immediately.”

Gias Ahmed, a former international secretary of the BNP and leader of the United States BNP, said, “No dictatorship has ever been able to perpetuate power through jail-torture-hulia in a sorted case, nor will it be possible in Bangladesh.”