Headlines
Redwan Rahman graduates from FilmdomThe local government minister has instructed to cut the road if necessary to remove the waterRequest to withdraw closure shop at night till EIDThe days of the Western monolithic world are over: PutinLeaders of Germany, France, and Italy in Kyiv to express solidarity‘Presidents of two countries call and pressurized Mbappé’Two U.S. citizens are thought to be missing or taken prisoner in UkraineCOVID: The technical committee suggested lifting some restrictionsPetrol prices hit record highs in the USCanada wants a stern warning against cigarettesThe task force to protect the mountains, demanded the formation of a speedy trial tribunalDepot fire: CID tries to find the cause on CCTVRussian passports are being issued in occupied UkraineFire on Parabat Express: Railroad to Sylhet is normal after 4 hoursAnother 24 children died in Mariupol, Ukraine said
Home More Aviation The way is open for Bangladeshis to go to England
Facebook
Twitter
WhatsApp
Print 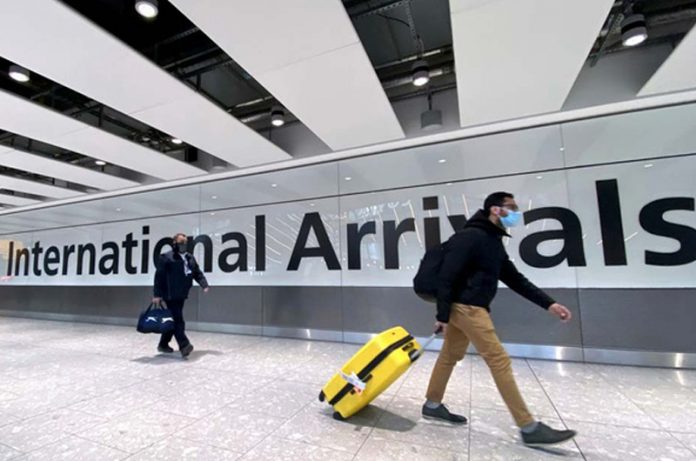 Staff Reporter: The United Kingdom is removing Bangladesh from the red list of travel bans after five months due to a reduction in coronavirus infections, creating an opportunity for Bangladeshis to return to the UK.

The new travel rules, announced by British Transport Minister Grant Shaps on Friday, call for the removal of a total of eight countries, including Bangladesh, from the high-risk ‘red list’. The other seven countries are Turkey, Pakistan, Maldives, Egypt, Sri Lanka, Kenya, and Oman.

The new rules will take effect on September 22 at 4 am local time in England. This new policy only applies to England. Scotland, Wales, and Northern Ireland will adjust their policies, according to a Reuters report.

The British government divided the countries of the world by listing the three colors – red, amber, and green – to control travel during the epidemic. Under the new rules, 54 countries will be on the red list after September 22. Freed from this list, eight countries will go to the amber list. From October, there will be no more Amber List. Everything else is green outside the red list.

In other words, foreigners from the 54 countries on the red list will still not be able to go to England. If a British citizen returns to the country from those countries, he has to follow the rules of 10 days quarantine.

And there will be no barriers to going to England from the green list countries. From September 22, there is no obligation to test Covid before going there from any country on the green list. Once there, they will be able to get tested.

An official of the Bangladesh High Commission in Britain said they had been informed by the British Foreign Office that Bangladesh would remain on the amber list until October 4.

“Bangladeshis and British-Bangladeshis will be able to travel to England from 4 am on September 22. But you have to stay in the home quarantine for 10 days while you are on the amber list. ”

In the second wave of coronavirus infection, on April 9, the United Kingdom put Bangladesh on the red list of high-risk countries. As a result, no Bangladeshi citizen had the opportunity to go there from Bangladesh.

In this situation, about seven thousand British-Bangladeshis were trapped, and it was called to remove the name of Bangladesh from the red list.

In a bilateral meeting with the outgoing British Foreign Secretary Dominic Raab on September 6, Foreign Minister Momen requested that Bangladesh be removed from the Red List.

He called the decision to keep Bangladesh on the sanctions list “discriminatory” despite the reduction in coronavirus infections.