Headlines
Redwan Rahman graduates from FilmdomThe local government minister has instructed to cut the road if necessary to remove the waterRequest to withdraw closure shop at night till EIDThe days of the Western monolithic world are over: PutinLeaders of Germany, France, and Italy in Kyiv to express solidarity‘Presidents of two countries call and pressurized Mbappé’Two U.S. citizens are thought to be missing or taken prisoner in UkraineCOVID: The technical committee suggested lifting some restrictionsPetrol prices hit record highs in the USCanada wants a stern warning against cigarettesThe task force to protect the mountains, demanded the formation of a speedy trial tribunalDepot fire: CID tries to find the cause on CCTVRussian passports are being issued in occupied UkraineFire on Parabat Express: Railroad to Sylhet is normal after 4 hoursAnother 24 children died in Mariupol, Ukraine said
Home International The way the 60 feet long bridge disappeared in Bihar
Facebook
Twitter
WhatsApp
Print 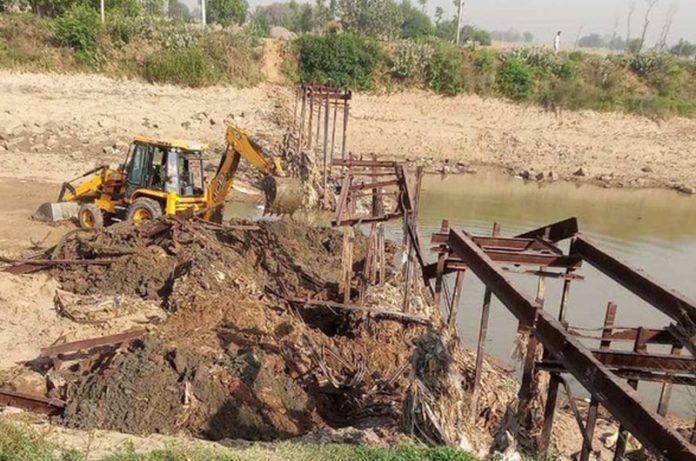 News Desk: Police in the eastern Indian state of Bihar have arrested six people on charges of stealing an entire bridge and cutting its iron and selling it at a bhangari shop.

The disappearance of the iron bridge over the Ara canal in broad daylight has caused a stir across India.

How the whole bridge was stolen, what the villagers were doing, how the thieves were caught or fell – the BBC has tried to put together different parts of it by talking to the police, local journalists, and villagers.

How a bridge was stolen:

One morning last week, residents of the village were overjoyed when four or five people, including some officials of the irrigation department of the state government, arrived in the village of Amiyawar near the town of Sasaram with digging machines and iron-cutting machines using gas.

They thought the government had finally listened to their requests; People have been sent to remove the old, abandoned bridge.

For three days in a row, those people would come to the bridge every day at 8 am and work till evening. The cut iron was picked up in a rented van, then taken to a local bhangari trader.

“No one suspected that it was a theft,” said Jitendra Singh, a local journalist. He also said that the distance of his house from the bridge is about 200 meters.

“Every morning I go to Morning Walk, and last week I saw some people working on the bridge. Almost everyone in the village has seen them, ” said Jitendra.

Irrigation department part-time worker Arvind Kumar is alleged to have overseen the entire disappearance of the bridge; If anyone asked him about this, he would say that the work was being done with the approval of the government.

Arvind is one of the six people arrested by Bihar police so far in the incident, said police official Ashish Bharti; He is also leading the investigation into the theft of the bridge.

Irrigation official Radhe Shyam Singh, van owner, and Bhangari businessman have been arrested. We are looking for at least 4 more, ” said Bharati.

The 60-foot-long and 12-foot-high iron bridge over the Ara canal was built in 1986; However, it has not been used for the last two decades as a concrete bridge nearby.

“Year after year, the wood on the bridge loosens and rusts on the iron. The thieves would steal a small amount of iron and sell it for a few rupees at Bhangari’s shop or use it for other purposes. But the way the bridge was stolen a few days ago was a robbery at noon, ” said Shailendra Singh, a villager.

Jitendra also said that the village head had made a written request to the authorities a few days before the theft to demolish the bridge as it was ‘at risk’.

More than once he has seen cattle and even human corpses floating upstream, stuck under the bridge.

“The stench was unbearable,” he said.

How were the thieves caught?

On April 5, the last day of the theft, Pawan Kumar, a resident of a nearby village, learned that the rusty old iron bridge in Amiyawar village had been removed.

“I called Radhe Shyam Singh, an officer of the Irrigation Department. If he did not catch me, I called another senior official and asked him why they did not remove the bridge as per the rules. According to the rules, the authorities should have called for tenders and given the job to those who can do the work for the lowest amount of money, ” said Pawan.

In response, the Irrigation Department official told him that he had not given any order to remove the bridge and that he did not know that it had already been removed.

After that, a complaint was lodged with the police. They launched an investigation and launched an operation to nab the culprits.

“We have seized a digging machine, several gas-fired iron torches and several cylinders, a pickup van, and 248 kg of metal iron,” said Bharati.

Why do thieves steal metal things?

In many parts of India, thieves regularly steal water pipes and sell them to many illegal factories that make cut rifles.

Thieves often carry manhole covers; Even the mugs in the train toilets are not left out.

When Indian railway authorities announced plans to modernize their train toilets a few years ago, officials said toilet mugs would be kept in the same shackles as before.

Not only in India, but also in the United States, United Kingdom, and many parts of Europe.

Thousands of working hours are lost each year in the UK due to the theft of electric wires, signaling wires, and various other equipment.

Theft of metal is causing severe damage to industries and local businesses across Europe and is causing major disruptions to emergency public services, according to Europol.

A 50-foot-long bridge in a small town west of Pennsylvania was reported missing by thieves in October 2011 in the United States.

Two years ago, a thief escaped from an abandoned railway bridge in Murmansk, Russia’s Arctic region, with a 75-foot-long and 57-ton metal structure.

In 2012, thieves in the Czech Republic stole a pedestrian bridge using forged documents; The thief also said at the time that the bridge was being removed to make way for bicycles.