Headlines
Redwan Rahman graduates from FilmdomThe local government minister has instructed to cut the road if necessary to remove the waterRequest to withdraw closure shop at night till EIDThe days of the Western monolithic world are over: PutinLeaders of Germany, France, and Italy in Kyiv to express solidarity‘Presidents of two countries call and pressurized Mbappé’Two U.S. citizens are thought to be missing or taken prisoner in UkraineCOVID: The technical committee suggested lifting some restrictionsPetrol prices hit record highs in the USCanada wants a stern warning against cigarettesThe task force to protect the mountains, demanded the formation of a speedy trial tribunalDepot fire: CID tries to find the cause on CCTVRussian passports are being issued in occupied UkraineFire on Parabat Express: Railroad to Sylhet is normal after 4 hoursAnother 24 children died in Mariupol, Ukraine said
Home Headlines The White House is getting its first black press secretary
Facebook
Twitter
WhatsApp
Print 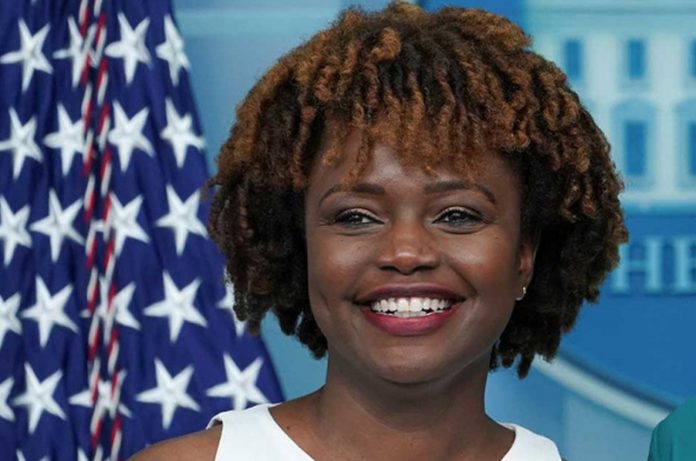 According to the BBC, Jean-Pierre, 44, has been acting deputy press secretary since Joe Biden was elected president.

He is being replaced by current Press Secretary Jane Sakir, 43. Saki will be leaving the post next week to join the US media outlet MSNBC.

The press secretary usually attends daily news briefings in front of reporters at the White House, which is an important position.

Before leaving, Jane Sackie took to Twitter to wish Jean-Pierre success and described his successor as a “wonderful woman” with “moral values.”

“I look forward to seeing his success. He will appear on this stage with his own style, intelligence, and pride,” Saki said.

Earlier, Carin Jean-Pierre worked as an analyst at MSNBC. He has been in Democratic Party politics for two decades.

Born on the French island of Martini in the Caribbean, Jean-Pierre grew up in Queens, New York. He was a key figure in the administration of former President Barack Obama.

Jean-Pierre was the national spokesman for a Liberal advisory group during the 2016 presidential election. Prior to joining the White House press team, Joe Biden also served as Chief of Staff to Vice President Kamala Harris.

The BBC reports that Carin Jean-Pierre is set to take over as White House press secretary at a crucial time in the run-up to the November midterm elections.