Headlines
The local government minister has instructed to cut the road if necessary to remove the waterRequest to withdraw closure shop at night till EIDThe days of the Western monolithic world are over: PutinLeaders of Germany, France, and Italy in Kyiv to express solidarity‘Presidents of two countries call and pressurized Mbappé’Two U.S. citizens are thought to be missing or taken prisoner in UkraineCOVID: The technical committee suggested lifting some restrictionsPetrol prices hit record highs in the USCanada wants a stern warning against cigarettesThe task force to protect the mountains, demanded the formation of a speedy trial tribunalDepot fire: CID tries to find the cause on CCTVRussian passports are being issued in occupied UkraineFire on Parabat Express: Railroad to Sylhet is normal after 4 hoursAnother 24 children died in Mariupol, Ukraine saidBelayet, who is in his fifties, has been given a good admission test against young
Home More Politics There is no legal impediment to inviting Khaleda to inaugurate Padma Bridge:...
Facebook
Twitter
WhatsApp
Print 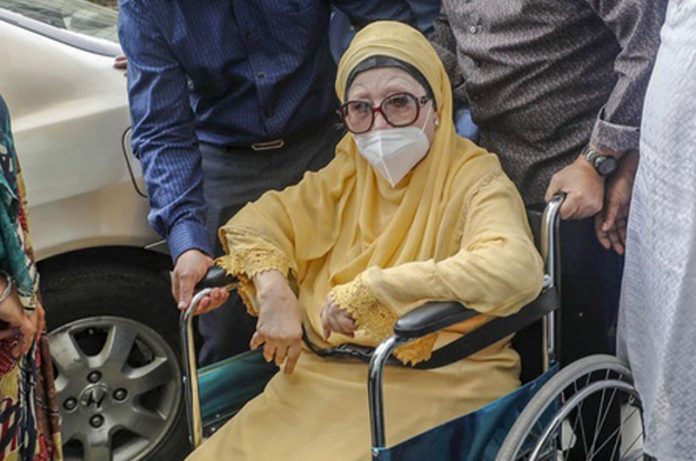 Staff Reporter: Although he wanted to invite convicted Khaleda Zia to the inauguration of the Padma Bridge, the bridge minister Obaidul Quader expressed doubts due to legal hurdles, but Law Minister Anisul Haque cut it off.

Anisul Haque said, “There are two conditions regarding Khaleda Zia, that is, she will receive treatment inside Bangladesh, and will not be able to go abroad. That is why there is no legal impediment to inviting him to the inauguration of the Padma Bridge. ”

The law minister was responding to a question from reporters at a function at the Judicial Administration Training Institute in Dhaka on Sunday.

Citing the law minister, he further said that he had also informed the bridge minister that there was no legal impediment.

Awami League general secretary and minister Obaidul Quader told reporters on Saturday that BNP chairperson Khaleda Zia would also be invited to the inauguration of the Padma Bridge if there were no legal complications.

Although former prime minister Khaleda Zia was convicted in a corruption case, she was released on condition of anonymity by the executive order of the government. He has only been to the hospital a few times during his last two years at home. Also did not go anywhere else.

The longest Padma bridge in the country will be inaugurated on June 25. The government has planned to inaugurate it in a grand manner.

The law minister further told reporters on Sunday that “Prime Minister Sheikh Hasina’s government has not taken any ‘action’ against anyone out of hatred.”

Elaborating on the fact that the case against Khaleda Zia was taken over by the caretaker government, he said, “If they (BNP) say that the Awami League government has done these cases, then I think they are just talking about what the people believe about their corruption.” The Awami League is blaming the government for the flow. Blaming them is baseless.

“The ACC is an independent organization. After the law of 2004, the BNP government did not even give a chair table to the ACC till 2006. It was actually implemented in 2007. “

Speaking at the inauguration of a course for judicial judges, the law minister said, “The Digital Security Act was not enacted to curb freedom of speech and freedom of the press. This law has been enacted to prevent cybercrime. ”