Headlines
Redwan Rahman graduates from FilmdomThe local government minister has instructed to cut the road if necessary to remove the waterRequest to withdraw closure shop at night till EIDThe days of the Western monolithic world are over: PutinLeaders of Germany, France, and Italy in Kyiv to express solidarity‘Presidents of two countries call and pressurized Mbappé’Two U.S. citizens are thought to be missing or taken prisoner in UkraineCOVID: The technical committee suggested lifting some restrictionsPetrol prices hit record highs in the USCanada wants a stern warning against cigarettesThe task force to protect the mountains, demanded the formation of a speedy trial tribunalDepot fire: CID tries to find the cause on CCTVRussian passports are being issued in occupied UkraineFire on Parabat Express: Railroad to Sylhet is normal after 4 hoursAnother 24 children died in Mariupol, Ukraine said
Home Crime ‘THEY’ took advantage of New Market incident: Police
Facebook
Twitter
WhatsApp
Print 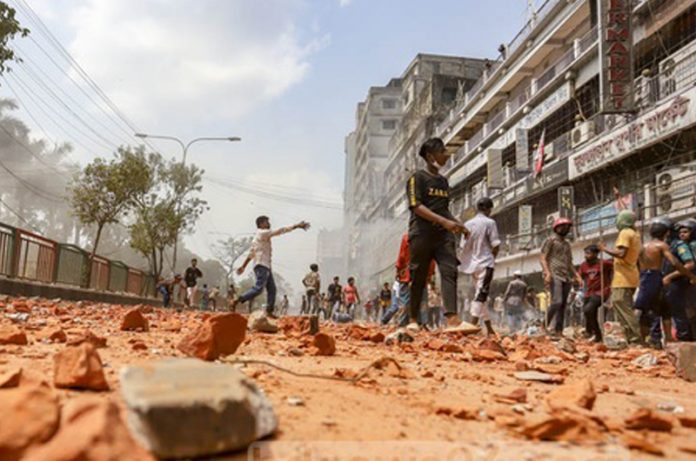 Md. Ashraful Islam: According to the police, the 24 people named in the case of the bloody clash with the students of Dhaka College in New Market area have ‘instigated’ the incident.

“There’s a lot going on in the videos that have been found – who was directly involved, and who was the instigator.”

The 24 people named in the case are accused of obstructing government work, assaulting police, throwing brickbats, vandalizing, and injuring; At No. 1 is the name of Advocate Maqbool Hossain, former president of New Market Thana BNP.

The clash between employees of Welcome and Capital Fast food, which erupted last Monday night, led to the allocation of Maqbool’s name from two city corporations.

However, do not run any shop yourself. Rafiqul Islam and Shahidul Islam have rented two shops. Rafiqul and Shahidul are relatives again.

Maqbool Hossain claimed that the police had made him an accused in the case because of his involvement in the BNP.

Drawing attention to the matter, police officer Shahenshah said, “They have taken the opportunity of the incident. All the businessmen and students who were in the field are being identified. ”

In the case filed by New Market Police Station Inspector (Investigation) Yamin Kabir, another 200 to 300 unidentified businessmen and employees and 500 to 600 students have been accused.

The shop owners say that at one stage of the quarrel between the workers of Welcome and Capital Fast Food over arranging the Iftar table, one party called some BCL workers from Dhaka College dormitory.

They went back to the dormitory after being beaten and went to attack the New Market at midnight with more students.

At the beginning of the clash, a video of the shop’s CCTV camera was spread on social media. The names of three BCL activists have appeared in various media outlets.

Asked about this, Additional Commissioner Shahenshah said, “Many of the two sides have been identified. You will find out more about them later.

Police in riot gear stormed a rally on Monday, removing hundreds of protesters by truck. The next morning, the area turned into a battlefield again, injuring more than 50 people. Two of them later died.

Many were seen fighting over helmets during the clashes. In addition to sticks, sharp weapons can be seen in the hands of some people. The question of who are the helmet wearers has been raised in the media.

Asked about this, police officer Shahenshah said, “Many students and businessmen clashed wearing helmets on that day. There are two reasons for this: keeping yourself safe and keeping your identity secret. “

“It simply came to our notice then. That is why the use of helmets has increased on both sides. ”

Asked if anyone from outside came in wearing a helmet and got into a fight, the additional police commissioner said, “I also said that one party took the opportunity. However, the way it is called ‘helmet force’ is not the issue, many of the journalists are wearing helmets themselves…

Police fired six tear gas shells and 211 rounds of the shotgun in two days to quell the clashes, police said.