Headlines
Redwan Rahman graduates from FilmdomThe local government minister has instructed to cut the road if necessary to remove the waterRequest to withdraw closure shop at night till EIDThe days of the Western monolithic world are over: PutinLeaders of Germany, France, and Italy in Kyiv to express solidarity‘Presidents of two countries call and pressurized Mbappé’Two U.S. citizens are thought to be missing or taken prisoner in UkraineCOVID: The technical committee suggested lifting some restrictionsPetrol prices hit record highs in the USCanada wants a stern warning against cigarettesThe task force to protect the mountains, demanded the formation of a speedy trial tribunalDepot fire: CID tries to find the cause on CCTVRussian passports are being issued in occupied UkraineFire on Parabat Express: Railroad to Sylhet is normal after 4 hoursAnother 24 children died in Mariupol, Ukraine said
Home Headlines Thomas Sankara: Who killed Che Guevara in Africa?
Facebook
Twitter
WhatsApp
Print 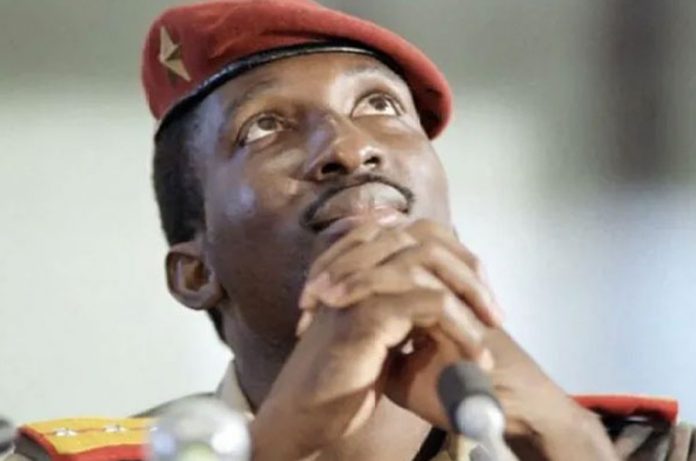 News Desk: Nearly 34 years after the shocking assassination of the African continent, the trial of 14 people has begun in the murder case of Burma’s former President Thomas Sankara.

The official hearing began in the capital, Vegadugu, on Monday, CNN reported.

Sankara, known as “Che Guevara of Africa”, was shot dead by members of the army during a coup on October 15, 1978. After that incident, his close friend Blaise Compaore came to power.

Compaore is among the 14 people charged in the Sankara murder case; He was forced to resign after widespread protests in 2014 and fled to the neighboring Ivory Coast, where he is still being held, the BBC reported.

In Compaore, however, Sankara has always denied involvement in the killings and has boycotted the trial.

Stickers with Sankara’s picture will be found in numerous taxis across West Africa; He is also one of the “inspirers” to Julius Malema, South Africa’s radical opposition leader on the other side of the continent.

“Sankara is a patriot to us. He loved his people, he loved his country, he loved Africa. He gave his life for us, ”said Luke Damiba, general secretary of the Thomas Sankara Memorial Committee.

During Sankara’s rule, the name of the country was changed from “Upper Volta” to “Burkina Faso”, meaning “land of just people”.

Education was on his priority list. During his four years in office, Burkina Faso’s literacy rate rose from 13 percent to 63 percent. He also carried out extensive vaccination programs across the country.

Following the ‘Marxist philosophy’, Sankara redistributed the land, taking the land from the landlords and giving it to the poor peasants. As a result of his move, the country’s cotton production increased a lot.

He called on the whole of Africa to unite and stand up against “neo-colonialism” in his view, like the International Monetary Fund (IMF) and the World Bank.

“The one who feeds you controls you,” he would say.

Sankara launched an “anti-imperialist foreign policy” that challenged French influence in West Africa. Once a colony, France’s influence over many West African countries, such as Burkina Faso, is still widespread.

Sankara’s widow, Mariam, has accused France of being the “mastermind” in her husband’s murder.

“He is still my president. What he has done for the people inspires young people like us to do something like him, “said Thomas Sankara, a student at the university in the capital, Vegas.

A six-meter-long bronze statue of Sankara, who died at the age of just 36, was unveiled at the capital’s Thomas Sankara Memorial Park in 2019; The statue was renovated last year after objections were raised about the first version.

Damiba said they also have plans to make the park bigger, with an 8-meter-tall tower overlooking Vegadugur.

There will be Sankara’s mausoleum, cinema hall, and media library. Through these, the Thomas Sankara Memorial Committee hopes to convey Sankara’s revolutionary thinking to future generations.

Sankara’s far-left policy has been sharply criticized by various human rights groups, who have called his rule “a time of severe repression.”

A 1986 report by Amnesty International accused Sankara of detaining and torturing political opponents without trial.

“I think he was far behind in accepting the idea of ​​pluralistic democracy. He would not talk to or listen to anyone who opposed him,” said Theophile Balima, who served as information minister in the Sankara government.

Former Burkina Faso president Jean-Baptiste Vedraogo said in an interview with the Africa Report website in 2020 that Sankara had “a combination of skepticism and political Machiavellianism.” Sankara overthrew Vedraogo.

Why is the trial taking so long?

“We have been waiting for a long time, for 26 years of Blaise Compaore’s rule. We could not even dream of the possibility of a trial during his (Compaore) tenure, ”said Sankara’s brother Paul.

In 1996, 10 years after Sankara’s murder, his wife, Mariam, filed a criminal complaint against her husband for murder; But the Supreme Court spent a decade and a half deciding whether to investigate.

After the overthrow of Compaore in 2014, there has been some progress in the case. The following year, the remains of a man believed to be Sankara were exhumed from the grave, but DNA analysis could not confirm whether the remains belonged to Sankara at all.

The documents, which are in the French archives, were later “declassified” and handed over to Burkina Faso in three steps. The last step documents were given in April this year.

Who is being tried?

Former Gilbert Diane, the former chief of staff at Compaore, and 11 others are facing trial at a military tribunal. They have been charged with ‘assault on state security’, ‘involvement in murder’ and ‘disappearance of a corpse’.

Diener, who was involved in a failed coup in 2015, is currently in jail with a 20-year sentence.

Among the accused is Diebre Jean Christophe, the doctor who signed Sankara’s death certificate; In the death certificate, he wrote, Sankara died a natural death. He has been accused of lying in official documents.

In addition to Compaore, one is missing from the trial, his former security chief Hayasinthe Kafando. An international arrest warrant has also been issued for him.

Allegedly, Kafando was the one who led the group that killed Sankara and 12 others.

Many fear that the Sankara massacre trial could push Burkina Faso, destabilized by attacks by al-Qaeda and Islamic State-linked jihadist groups, into further instability.

Compaore’s influence in the West African country has not yet waned, leading many analysts to fear that his loyal troops could cause trouble. However, so far no such signs have been seen, the report said.

“I don’t think this trial will increase instability. Negotiations between the parties are rare without justice, ”Matthew Pelerin, a Sahel expert from the International Crisis Group (ICG), told a French magazine in April 2020.