Headlines
Redwan Rahman graduates from FilmdomThe local government minister has instructed to cut the road if necessary to remove the waterRequest to withdraw closure shop at night till EIDThe days of the Western monolithic world are over: PutinLeaders of Germany, France, and Italy in Kyiv to express solidarity‘Presidents of two countries call and pressurized Mbappé’Two U.S. citizens are thought to be missing or taken prisoner in UkraineCOVID: The technical committee suggested lifting some restrictionsPetrol prices hit record highs in the USCanada wants a stern warning against cigarettesThe task force to protect the mountains, demanded the formation of a speedy trial tribunalDepot fire: CID tries to find the cause on CCTVRussian passports are being issued in occupied UkraineFire on Parabat Express: Railroad to Sylhet is normal after 4 hoursAnother 24 children died in Mariupol, Ukraine said
Home More Health TIB has done very ‘opaque’ work: Health Minister
Facebook
Twitter
WhatsApp
Print 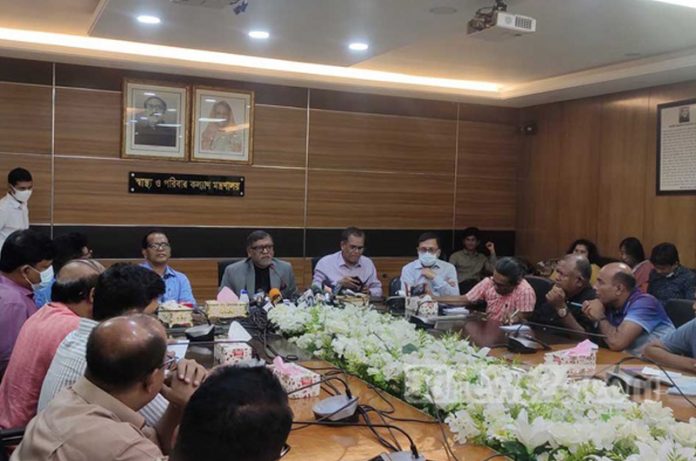 He made the statement at a press conference at the Secretariat on Monday.

Zahid Malik said, “The Ministry of Health has worked very transparently to deal with the epidemic. But Transparency International has done a very ‘transparent’ job. “

According to the TIB report titled ‘Good Governance in Coronavirus Crisis: Challenges of Inclusion and Transparency’, 22 percent of patients came to the hospital for treatment during the epidemic.

The report also alleges irregularities and corruption in government hospitals for charging between 400 TK and 10,000 TK as ‘illegal’ and for not providing information on services in private hospitals, abusing and inciting people to receive services.

Responding to this, the Health Minister said, “TIB does not care about the image of the country. That is why it presents misleading information. “

Asked about the nature of the TIB survey, he said, “We try to make the country’s image brighter, the country’s position better. It stays in our minds all the time. But many organizations, including the TIB, may not care. ”

The TIB report said that there was a lack of transparency in the government’s spending on vaccination against coronavirus in the country.

“But TIB has taken information from 105 centers under their survey. Although 12 crores 84 lakh people have been vaccinated across the country, TIB has spoken to 1,800 people.

Commenting that the survey data was obtained by telephone, the health minister said that it was not “certain” how the patient and the patient’s identity were identified by telephone. In such a small-scale survey, ‘of course, accurate information was not given.

Zahid Malek also claimed that the allegation of bribery by TIB for vaccination was not correct.

“It has been said that they have to pay an average of TK 67 as a bribe to get vaccinated. Now, even the fakir does not take that money. ”

TIB executive director Iftekharuzzaman told a news conference, “The health minister has said that more than TK 40,000 crore has been spent on management since the purchase of the vaccine. As we have seen from other sources, due to a lack of precise information from the government, about 18 thousand crore TK has been spent here. The government needs to be more transparent in these matters. “

The health minister said that there was a ‘misunderstanding’ in the TIB’s report on the price of vaccines.

At a function in March, the health minister said that TK 40,000 crore had been spent on vaccines. He gave his explanation at the press conference on Monday.

“I was talking about TK 40,000 crore. This does not mean that the government of Bangladesh has spent 40 thousand crores TK. Bringing vaccines, renting a plane, keeping them, the price of syringes, running a vaccination program – altogether we have spent about 20 thousand crores TK.

“The remaining TK 20,000 crore is – we have calculated the price of the nine and a half crore dose of vaccine we got for free. Most of the tickers received as a gift are Pfizer, Modern Otter also has a price. Assuming that, the price of that vaccine is 25 thousand crores TK. Together, we have said that we have vaccinated the people of Bangladesh worth Rs 40,000 crore. ”