Headlines
The local government minister has instructed to cut the road if necessary to remove the waterRequest to withdraw closure shop at night till EIDThe days of the Western monolithic world are over: PutinLeaders of Germany, France, and Italy in Kyiv to express solidarity‘Presidents of two countries call and pressurized Mbappé’Two U.S. citizens are thought to be missing or taken prisoner in UkraineCOVID: The technical committee suggested lifting some restrictionsPetrol prices hit record highs in the USCanada wants a stern warning against cigarettesThe task force to protect the mountains, demanded the formation of a speedy trial tribunalDepot fire: CID tries to find the cause on CCTVRussian passports are being issued in occupied UkraineFire on Parabat Express: Railroad to Sylhet is normal after 4 hoursAnother 24 children died in Mariupol, Ukraine saidBelayet, who is in his fifties, has been given a good admission test against young
Home More Court To go to heaven, a shortcut was assassinating Jafar Iqbal : The...
Facebook
Twitter
WhatsApp
Print 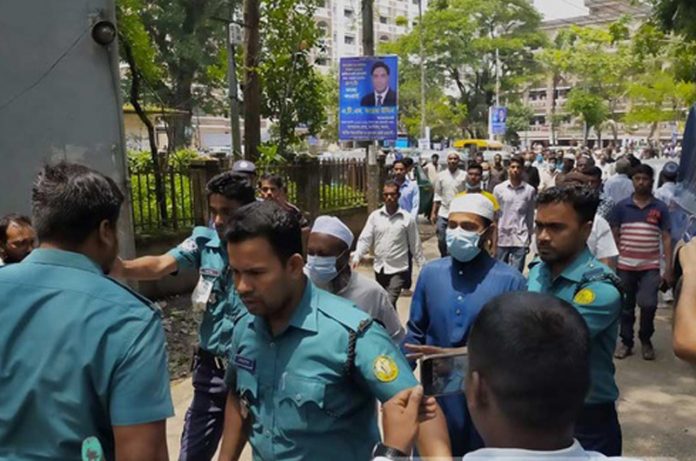 Court Reporter: Writer-Professor Muhammad Zafar Iqbal appears to have been the victim of the temptation to gain paradise in extremist propaganda, the court said in a statement following the verdict in the assassination attempt case.

Judge Nurul Amin Biplob of the Sylhet Anti-Terrorism Tribunal observed that Zafar Iqbal was a popular children’s writer and science writer outside the country. He has been playing a role in shaping the mindset of the nation by writing books on science and children’s issues. His position against religious orthodoxy and superstition and in favor of the spirit and progress of the Liberation War is well known.

The verdict on Faizul, the main accused, said that Faizul carried out the barbaric attack without understanding the true meaning of Islam and considered killing innocent people as a virtue. After reading jihadi articles, jihadi books on the internet site and listening to the speeches of various extremist speakers, he became involved in terrorist activities.

Noting that no involvement of Faizul Hasan with the country or any international terrorist organization has been proved, the observation said that Jafar Iqbal had spoken on behalf of bloggers and atheists at different times and Faizul planned to assassinate him with his own hands; Attempted assassination by calling him an enemy of Islam and an atheist.

Another accused, Sohag Mia, allegedly provided various jihadi books, audio, and video clips to encourage Faizul to engage in militant activities under the guise of a textile business, and to assassinate the country’s free-spirited writers.

The judge said Faizul’s act was undoubtedly a terrorist act, more precisely a “religious act of terrorism”. Such actions on the part of the victims are not acceptable just because they stand by the victims of the killings in this country just to express their dissent and dissent. Because free expression is the determinant of tolerance, democracy, progress, and progress of civilization. If the practice of these is not ensured, the country will definitely walk backward. It is possible to find the right path only through the practice of independent and constructive dissent.

Emphasizing the need to stop online extremist activities, it has been observed that some vested interests are sowing the seeds of terrorism in the young souls by spreading their extremist terrorist ideology in the virtual world and showing the ‘shortcut’ way to heaven easily.

The tribunal considers it necessary for law enforcement agencies to adopt more robust and effective measures to stop the flow of information by identifying various sites or groups that encourage these extremist and terrorist activities in the cyber world.

Regarding the motive of the attack, the judge said that the main motive of the accused was to spread fear and apprehension among the writers who wrote or spoke about liberalism, progressivism, science, and religious prejudices prevalent in the society through the brutality and atrocities of the attack. If this accused is not given exemplary punishment, people of other terrorist extremist ideologies will be encouraged to do such a thing.

Madrasa student Faizul Hasan attacked Zafar Iqbal on March 3, 2018, at a function on the open stage of Sylhet Shahjalal University of Science and Technology campus.

Muhammad Ishfaqul Hossain, the registrar of Shahjalal University, filed a case with the Jalalabad police station on the same night under the anti-terrorism law.

Responding to the verdict, the defendant’s lawyer Motahir Ali said, “Four people have been acquitted in the verdict. We are satisfied with this. Two have been convicted. We will go to the high court after discussing the matter with the accused. ”

Plaintiff Shahjalal University of Science and Technology Registrar. Ishfaqul Hossain said, “After receiving the full copy of the verdict, we will talk to the lawyers and take the next decision.”