Headlines
Redwan Rahman graduates from FilmdomThe local government minister has instructed to cut the road if necessary to remove the waterRequest to withdraw closure shop at night till EIDThe days of the Western monolithic world are over: PutinLeaders of Germany, France, and Italy in Kyiv to express solidarity‘Presidents of two countries call and pressurized Mbappé’Two U.S. citizens are thought to be missing or taken prisoner in UkraineCOVID: The technical committee suggested lifting some restrictionsPetrol prices hit record highs in the USCanada wants a stern warning against cigarettesThe task force to protect the mountains, demanded the formation of a speedy trial tribunalDepot fire: CID tries to find the cause on CCTVRussian passports are being issued in occupied UkraineFire on Parabat Express: Railroad to Sylhet is normal after 4 hoursAnother 24 children died in Mariupol, Ukraine said
Home Sports United’s thrilling comeback with Ronaldo’s winning goal
Facebook
Twitter
WhatsApp
Print 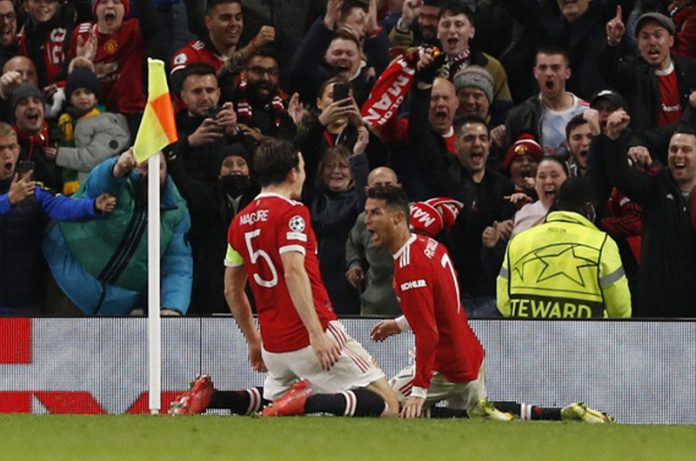 Sports Desk: The push to fall behind by two goals in the first thirty minutes, the frustration of not seeing the net despite all the great opportunities, and the ball hit the post-crossbar. Trapped in a cycle of failure, the fear of another defeat arose strongly in the Manchester United camp. From there they wrote a wonderful story of turning around. Cristiano Ronaldo, who missed a few chances, went on to lead the team to victory.

The hosts beat Atalanta 3-2 in the Champions League on Wednesday night at Old Trafford. Ule Gunar Sulshar’s team climbed to the top of Group F with their second win in a row after losing the match against the weak Young Boys.

Mario Pasalic and Demiral’s goals put United behind. Harry Maguire then equalized after Marcus Rashford narrowed the gap. And in the end, Ronaldo scored the goal.

United took 22 shots on goal with 55 percent of the ball in possession, 9 of which were on target. Atalanta had six goals in 13 shots.

United won after two matches in all competitions. They lost to Leicester City after a draw with Everton in the last two rounds of the Premier League.

Desperate to get back into the match after falling behind by two goals, Manchester United could not take advantage of the great three chances before and after the break. Misfortune also became an obstacle in two stages.

In the last few seasons in fearless football, Atalanta has made a great start to the match. They went ahead in the fifteenth minute of the counter-attack. From the right side, Pasalich sent the ball to the net by extending the leg extended to the goal of Japaksta.

Ronaldo created a good chance after five minutes. He cut one and raised it six yards from the right byline to the front of the box, but Bruno Fernandez could not jump properly. Fred, who was standing in the gap behind, was frustrated by hitting along the opposing goalkeeper. Ronaldo’s shot was blocked by goalkeeper Juan Muso in the 28th minute.

Two minutes later, Demiral stopped Old Trafford by increasing the lead. The Turkish defender jumped the ball from the corner and sent it to the head.

At the end of the first half, United could not take advantage of two great chances in the space of two minutes. Fred’s shot from the penalty spot missed in the 44th minute, and Rashford’s corner kick was blocked at the crossbar.

After the break, United got another golden opportunity to start the game. Ronaldo took control of Fernandez’s pass and entered the D-box, the only obstacle in front was the goalkeeper. But the Portuguese star was disappointed with the shot along with him.

Holding the pressure, United finally got the goal in the 53rd minute. Fernandez’s great through ball caught in the D-box to reduce the gap in the corner shot, Rashford. The English forward also scored a goal in a 4-2 loss to Leicester City in the Premier League four days ago.

They could have scored the second goal five minutes later; However, Scott McTamin’s shot from close range took place in the post. After a while, the goalkeeper jumped into another corner shot of Ronaldo.

Amid United’s one-sided pressure, the visitors created an opportunity to score another goal in the 61st minute. David De Heya put the team in the double save, the match. The Spanish goalkeeper returned Ruslan Malinovsky’s long-range shot in the corner after Duvan Zapata’s shot had been blocked.

Four minutes later, the most successful team in the Premier League returned to parity. Jaden Sancho increased the cross to the D-box from the right when Atalanta failed to clear a corner completely. The ball touched Edinson Cavani’s head and landed at Maguire’s feet. This unprotected English defender finds the address with a right-foot shot.

And in the 61st minute came Ronaldo’s goal to secure 3 points. He jumped from the left to Luke Shaw’s cross and scored the goal. The five-time best footballer of the year scored in three consecutive matches.

The number of goals scored by Ronaldo, the highest scorer in the Champions League, has increased to 136.

Manchester United is at the top with 6 points with two wins in three matches.

In another match, Villarreal won 4-1 at the Young Boys’ Ground. The Italian team Atalanta with two points, equal to the Spanish team.

Young boys at the bottom with 3 points.