Headlines
Redwan Rahman graduates from FilmdomThe local government minister has instructed to cut the road if necessary to remove the waterRequest to withdraw closure shop at night till EIDThe days of the Western monolithic world are over: PutinLeaders of Germany, France, and Italy in Kyiv to express solidarity‘Presidents of two countries call and pressurized Mbappé’Two U.S. citizens are thought to be missing or taken prisoner in UkraineCOVID: The technical committee suggested lifting some restrictionsPetrol prices hit record highs in the USCanada wants a stern warning against cigarettesThe task force to protect the mountains, demanded the formation of a speedy trial tribunalDepot fire: CID tries to find the cause on CCTVRussian passports are being issued in occupied UkraineFire on Parabat Express: Railroad to Sylhet is normal after 4 hoursAnother 24 children died in Mariupol, Ukraine said
Home More Environment Use water sparingly: PM
Facebook
Twitter
WhatsApp
Print 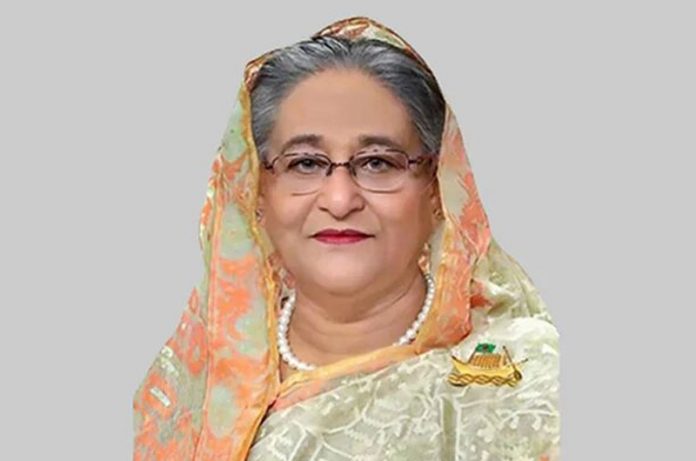 March 22 was World Water Day. The theme of this year’s World Water Day is ‘Groundwater-Making the Invisible Visible’. On this occasion, the Ministry of Water Resources organized a program today. The Prime Minister virtually attended the main function of Pani Bhaban on Green Road in the city from Ganobhaban. The Prime Minister said these things there. He urged the people to exercise restraint in using water for any purpose like household, construction, or irrigation. Because the government has to spend a huge amount of money on water purification.

Sheikh Hasina said, “In the field of development philosophy, we are emphasizing nature-based solutions. We need to find natural strategies for the proper management of water resources. ‘

The Prime Minister directed all concerned to keep in mind the two issues of conservation of rain and floodwater, as well as the construction of reservoirs in the implementation of any development project. “We need to focus on conserving rainwater and building underground reservoirs,” he said.

Besides, the Prime Minister directed all concerned to open the river junctions with canals, beels, haors and baors, otherwise, the navigability of the river would be damaged. He emphasized the need to take the development plan into consideration.

Sheikh Hasina emphasized creating navigability during river dredging as well as creating buffer zones to conserve excess water or flood water, adding that this water could be used for winter cultivation. “We need to know how to survive the floods and build relationships,” he said. Because Bangladesh is a disaster-prone country.

The Prime Minister directed to planting of tree saplings while undertaking road or embankment construction projects. According to him, this step will help protect from landslides.

Excessive use of groundwater can increase the risk of frequent earthquakes. And Bangladesh is considered an earthquake-prone country. That is why the Prime Minister directed everyone to reduce their dependence on groundwater. He said the government was implementing various measures to reduce the use of groundwater, including purifying river water, providing safe water to the people, and using surface water for irrigation. However, he requested austerity in using water for all purposes including household, construction, or irrigation.

Although Bangladesh has not played any role in the adverse effects of climate change, some small countries like Bangladesh have to pay a huge compensation for it, Sheikh Hasina said, “We have to take our own steps to protect the country.”

The government has adopted the ‘Mujib Climate Prosperity Plan’ to address the adverse effects of natural disasters and climate change, with special instructions in this regard.

The Prime Minister said they have also started formulating Delta Plan-2100 and implementing it to ensure safe and prosperous life for generations to come.

Incidentally, World Water Day is observed on 22 March every year with a focus on the importance of clean water and recommendations for sustainable management of clean water resources.

In line with the recommendations of the United Nations Conference on Environment and Development (UNCED), a resolution adopted by the UN General Assembly declared March 22 as World Day for Water, which has been observed since 1993.