Headlines
Redwan Rahman graduates from FilmdomThe local government minister has instructed to cut the road if necessary to remove the waterRequest to withdraw closure shop at night till EIDThe days of the Western monolithic world are over: PutinLeaders of Germany, France, and Italy in Kyiv to express solidarity‘Presidents of two countries call and pressurized Mbappé’Two U.S. citizens are thought to be missing or taken prisoner in UkraineCOVID: The technical committee suggested lifting some restrictionsPetrol prices hit record highs in the USCanada wants a stern warning against cigarettesThe task force to protect the mountains, demanded the formation of a speedy trial tribunalDepot fire: CID tries to find the cause on CCTVRussian passports are being issued in occupied UkraineFire on Parabat Express: Railroad to Sylhet is normal after 4 hoursAnother 24 children died in Mariupol, Ukraine said
Home Country Vaccination of 12-year-olds with WHO approval: Health Minister
Facebook
Twitter
WhatsApp
Print 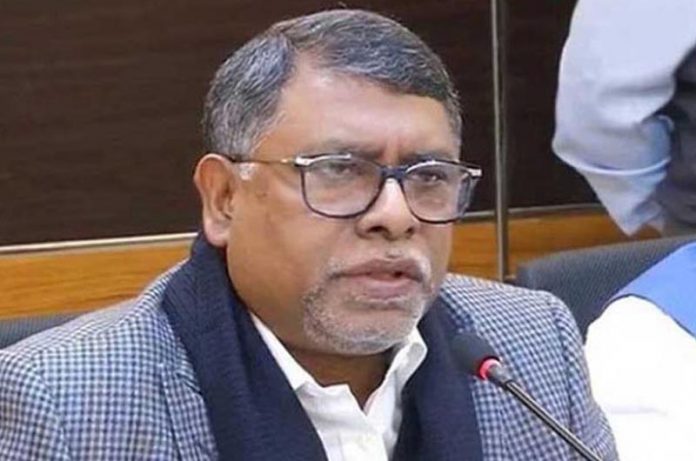 Senior Reporter: Health Minister Zahid Malek has said that coronavirus vaccination will be started for 12- to 18-year-olds with the approval of the World Health Organization.

He made the remarks in response to a question from reporters after a cabinet meeting at the secretariat on Monday.

The health minister said, “The Prime Minister’s directive is to give the vaccine to everyone who can. Those between the ages of 12 and 18 will also be vaccinated.

Commenting on the number of 12-year-olds, the minister said, “We have to have that number of vaccines in hand. So we are arranging that vaccine, and we will be able to give these vaccines subject to the approval of WHO.

“We have already applied to the WHO for a decision,” he said. If we decide, then we can work, we are waiting for him now. ”

Although 12 to 18-year-olds are currently vaccinated in 22 countries, the WHO has not yet given official approval, he said, adding that “they are giving it in their own country, in their own way, according to their own laws.”

Asked which vaccines would be given in Bangladesh if approved by the WHO, the minister said, “In all the countries that are being given, the Pfizer and Modern vaccines are being given. We will provide vaccines that the WHO will allow being given to children between the ages of 12 and 18.

“There was a meeting yesterday where it was decided to open the school-college. Teachers have already been vaccinated, many students have been vaccinated. We vaccinated the teachers and students of the medical college. ”

After the inter-ministerial meeting on Sunday, Education Minister Dipu Moni said that the process of vaccinating people above the age of 18 is underway as per the instructions of the Prime Minister. The health department is also working to bring 12-year-olds under the vaccine.

The health minister said that there were 16,000 beds in the hospitals due to the reduction in infections. These have been emptied due to reduced corona infection. ”