Headlines
Redwan Rahman graduates from FilmdomThe local government minister has instructed to cut the road if necessary to remove the waterRequest to withdraw closure shop at night till EIDThe days of the Western monolithic world are over: PutinLeaders of Germany, France, and Italy in Kyiv to express solidarity‘Presidents of two countries call and pressurized Mbappé’Two U.S. citizens are thought to be missing or taken prisoner in UkraineCOVID: The technical committee suggested lifting some restrictionsPetrol prices hit record highs in the USCanada wants a stern warning against cigarettesThe task force to protect the mountains, demanded the formation of a speedy trial tribunalDepot fire: CID tries to find the cause on CCTVRussian passports are being issued in occupied UkraineFire on Parabat Express: Railroad to Sylhet is normal after 4 hoursAnother 24 children died in Mariupol, Ukraine said
Home Country Waterlogging in Chittagong after 3 hours of rain
Facebook
Twitter
WhatsApp
Print 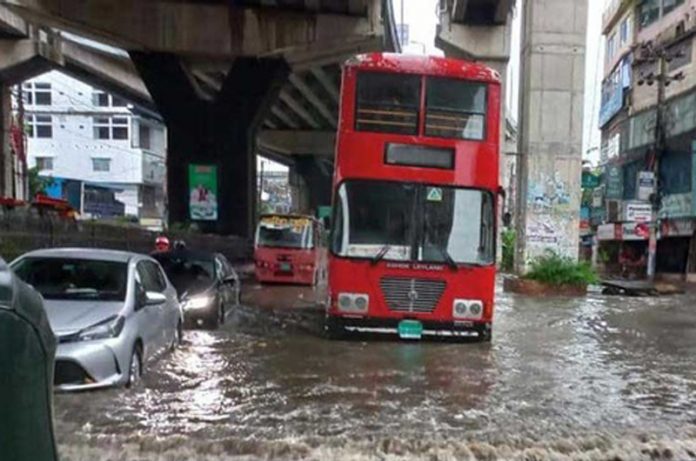 Chittagong Bureau: After a few days of hot weather, wind and rain gave some relief to the people of Chittagong, but it was taken away by the misery of waterlogging.

The Patenga Meteorological Office recorded 48 mm of rainfall from 6 am to 12 noon. The rainfall was 43 mm between 9 am and 12 noon.

Ruman Bhattacharya, a resident of Chawkbazar area, said, “Water rose on Chawkbazar Raw Bazaar, Bara Mia Mosque, Fultal, KB Aman Ali Road. Residents of the area had to go to the office to get over the dirty water.

“The students of the school suffer the most. They had to go to class in dirty water with their uniforms. ”

Water accumulated on the main road in gate number two area of ​​the city. All kinds of vehicles including rickshaws, private cars, and buses were moving under the water.

Private employee Md. Was going to Agrabad from gate number two. Raihan. He said, “Even in less than this rain, the water rises. Rain in front. Then it will be like this every day. Again, it is not clear where the canals are open. We have to walk on the road in fear. ”

At present, four projects are underway in Chittagong city at a cost of around TK 10,000 crore. The Chittagong Development Authority (CDA) is implementing the largest project of around TK 6,500 crore.

The construction of this project is being carried out by the 34 Engineer Construction Brigade of the Army. Under the project, temporary dams have been constructed for construction work in several canals of the city.

Councilor Mubarak Ali, chairman of the standing committee of the Chittagong City Corporation, said that waterlogging was taking place in the city even in the summer rains as the dams had not been opened yet.

“We have given a list to the CDA to remove the dams in the canals before the monsoon,” he said. They also said they would remove them before the rains.

“Some dams have already been removed. The water cannot move because of what is left. That is why there is waterlogging. ”