Headlines
Redwan Rahman graduates from FilmdomThe local government minister has instructed to cut the road if necessary to remove the waterRequest to withdraw closure shop at night till EIDThe days of the Western monolithic world are over: PutinLeaders of Germany, France, and Italy in Kyiv to express solidarity‘Presidents of two countries call and pressurized Mbappé’Two U.S. citizens are thought to be missing or taken prisoner in UkraineCOVID: The technical committee suggested lifting some restrictionsPetrol prices hit record highs in the USCanada wants a stern warning against cigarettesThe task force to protect the mountains, demanded the formation of a speedy trial tribunalDepot fire: CID tries to find the cause on CCTVRussian passports are being issued in occupied UkraineFire on Parabat Express: Railroad to Sylhet is normal after 4 hoursAnother 24 children died in Mariupol, Ukraine said
Home Country What is the need for so many bridges, this time in the...
Facebook
Twitter
WhatsApp
Print 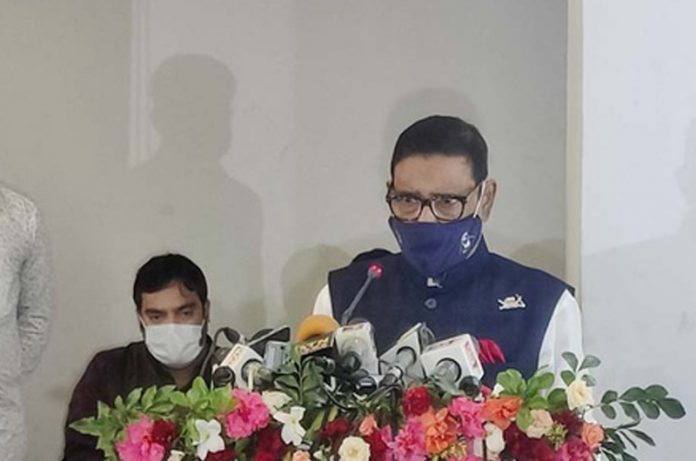 Md. Ashraful Islam: Road Transport and Bridges Minister Obaidul Quader said the government was considering constructing a tunnel instead of the second Padma Bridge at Daulatdia-Paturia to facilitate communication with the south-western part of the country.

He said, “We have to save the river, otherwise there will be no green Bangladesh. What is the need to bridge so much? From now on, the government is pushing for tunnels instead of bridges. ”

He made the remarks at a seminar titled ‘Bangabandhu’s Golden Bengal Sheikh Hasina’s Struggle for Development, Khulna to Chittagong on the Highway of Uninterrupted Dreams’ at the Institution of Engineers auditorium in Dhaka on Friday.

The seminar was organized by the subcommittee on science and technology of the Bangladesh Awami League on the occasion of the 64th birth anniversary of Prime Minister Sheikh Hasina.

Obaidul Quader said, “Padma bridge has become one, now there is a demand for another bridge in Daulatdia. What will happen to the navigability of the river if there are two bridges? It is, but we are experimenting.

“So we are thinking of underpass without bridging. We are thinking of constructing a tunnel at Daulatdia-Paturia. We also have plans to build another tunnel from Dewanganj in Jamalpur to Gaibandha. ”

Bridges Minister Quader said the work of the country’s first Bangabandhu tunnel under the Karnafuli River in Chittagong has been completed 85 percent.

He said, “The more you build the bridge, the more it will lose its navigability. Many bridges have been inaugurated and about 50 more are waiting to be inaugurated. ”

The minister was directed to repair the Jessore-Khulna highway after a thorough examination. He said if the road is not maintained, its benefits will not be available.

Highlighting the development of communication systems during the Awami League government, Quader said, “There is no expressway like Dhaka Mawa in many European countries. Neighboring India is not. From Gazipur to Tangail, from Elenga to Rangpur, from Rangpur to Panchagarh one. Another old lady, these are our plans. It is working. Khulna-Mongla-Bagerhat are also part of our work.

“There is no need for a new plan. The Dhaka-Sylhet four-lane work will be completed as soon as possible. Another one is the four-lane road from Chittagong to Cox’s Bazar. I have promised that too. I have a plan to start it soon. Talked to. ”

Commenting that the picture of road connectivity in the country will change next year, the minister said, “Metrorail, Mass Rapid Transit, Padma Bridge will all be inaugurated. Sheikh Hasina is making all the plans to implement her vision, has made a master plan. When you are doing what you need to do. Our vision is not the vision of BNP. ”

Regarding the announcement of BNP’s Vision-2030 in the last election, Awami League general secretary Quader said, “This is a political stunt ahead of the election. It is confined to the statement and will not see the light of day. With what will the BNP elect?

“As a result, the pressure on our capital Dhaka has increased. If any vehicle from Khulna or Barisal wants to go to Chittagong port, they have no direct arrangement except to go to Dhaka. If direct east-west communication can be established, the pressure on the Dhaka-Chittagong road will be reduced to a great extent. ”

Citing the example of India, Sabur said, “They have built a road network across the coast. As a result, they have created an integrated network for transporting goods from port to port. If we can connect directly to the coast, it will have a huge impact on the country’s blue economy. ”

Chairman of the subcommittee on science and technology, a member of the Awami League’s advisory council. Engineer Kazi Khairul Bashar, Secretary, IEB Dhaka Center, presided over the function.