Headlines
Redwan Rahman graduates from FilmdomThe local government minister has instructed to cut the road if necessary to remove the waterRequest to withdraw closure shop at night till EIDThe days of the Western monolithic world are over: PutinLeaders of Germany, France, and Italy in Kyiv to express solidarity‘Presidents of two countries call and pressurized Mbappé’Two U.S. citizens are thought to be missing or taken prisoner in UkraineCOVID: The technical committee suggested lifting some restrictionsPetrol prices hit record highs in the USCanada wants a stern warning against cigarettesThe task force to protect the mountains, demanded the formation of a speedy trial tribunalDepot fire: CID tries to find the cause on CCTVRussian passports are being issued in occupied UkraineFire on Parabat Express: Railroad to Sylhet is normal after 4 hoursAnother 24 children died in Mariupol, Ukraine said
Home National What the foreign minister said about the Taliban government
Facebook
Twitter
WhatsApp
Print 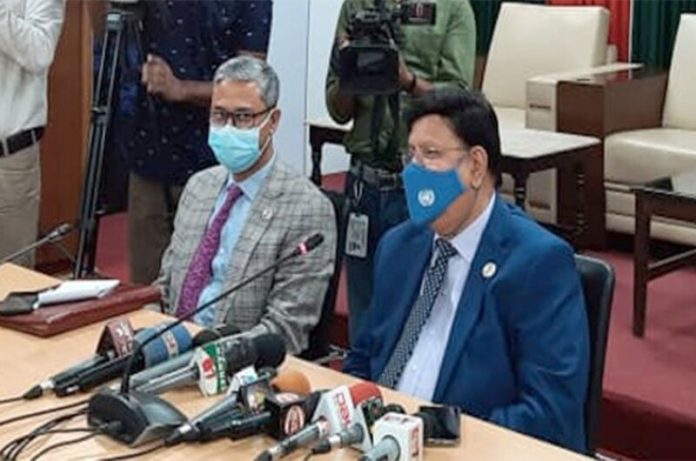 News Desk: The Taliban has formed an interim government in Afghanistan. Foreign Minister AK Abdul Momen has clarified Bangladesh’s position on the issue.

He was speaking to reporters at the Foreign Ministry on Thursday.

“Some of them (in Europe) have said, the BBC has said, will you do what India will do or not?” Or do what Pakistan does?

“We said we wouldn’t see who did what.”

The leaders of the United Kingdom and the Netherlands also wanted to know the position of Bangladesh from the Foreign Minister.

Abdul Momen said, “Everyone has asked me, will we join their bandwagon or not?” What is our position?

“We have said that we are still monitoring the Afghan issue,” he said. Do they say that we will recognize the new government or not? We said, let’s see their condition. We will decide based on their attitude, their policies, their projects.

Foreign Minister Momen said Bangladesh would decide to work with the SAARC countries if the government was formed in Afghanistan with the support of the majority of the people of that country.