Headlines
Redwan Rahman graduates from FilmdomThe local government minister has instructed to cut the road if necessary to remove the waterRequest to withdraw closure shop at night till EIDThe days of the Western monolithic world are over: PutinLeaders of Germany, France, and Italy in Kyiv to express solidarity‘Presidents of two countries call and pressurized Mbappé’Two U.S. citizens are thought to be missing or taken prisoner in UkraineCOVID: The technical committee suggested lifting some restrictionsPetrol prices hit record highs in the USCanada wants a stern warning against cigarettesThe task force to protect the mountains, demanded the formation of a speedy trial tribunalDepot fire: CID tries to find the cause on CCTVRussian passports are being issued in occupied UkraineFire on Parabat Express: Railroad to Sylhet is normal after 4 hoursAnother 24 children died in Mariupol, Ukraine said
Home Headlines Why did the protesters attack a museum in Sri Lanka?
Facebook
Twitter
WhatsApp
Print 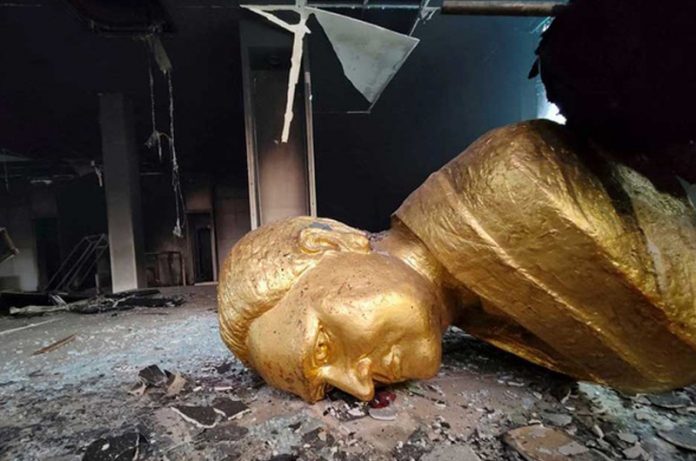 News Desk: While the anti-government unrest in Sri Lanka has had little to do with the deaths and injuries of scores of people, it has also had the symbolic significance of turning a museum into rubble this week in the wake of the protests.

The Rajapaksa Museum is located in Hambantota in the south of the country, an area known as the stronghold of the ruling Rajapaksa family.

It was created in memory of the parents of current President Gotabaya Rajapaksa and his elder brother Mahinda Rajapaksa; Mahinda himself was once the President of Sri Lanka.

The museum houses pictures, clothes, household items, and handwritten letters of the late Don Alvin Rajapaksa and his wife Dardina, according to a BBC report.

Protesters stormed the museum on Monday, knocking out wax statues of Alvin and Dardina and vandalizing the building.

Analysts believe that this may have angered them more than the Rajapaksa family.

The BBC says the museum, located in the village of Meda Maulana, has become a symbol of alleged corruption. Mahinda was president when it opened in 2014; Gotabaya was then the defense secretary of his brother’s administration.

Gotabaya built the museum on privately owned land, but with state funding. The Sri Lankan Navy was instructed to provide manpower for the construction of the museum. The Ministry of Defense and Urban Development, which is in charge of Gotabayar, was also involved in the design and other preliminary work.

When Mahinda lost the 2015 elections, an investigation was launched into the state’s spending on the museum.

Gotabaya dismisses the injustice of building a museum; He also denied allegations that the government spent more than 60 million Sri Lankan rupees on the museum. However, he later returned some money.

After he was elected president in 2019, the charges against him were dropped using the President’s immunity. However, Mahinda was not involved in the investigation into the museum.

Many were impressed by the two Rajapaksa brothers for winning the 25-year war against the separatist Tamil Tigers in 2009.

During the war, many considered it impossible to win against the Tamil separatists; That is why the two brothers later got the status of hero to the majority Sinhalese.

Because of that popularity, the Rajapaksa family began to consider themselves the masters of the country’s penitentiary; They are convinced that they have liberated the island from the scourge of terrorism. But Rajapaksa’s popularity has waned during the economic crisis.

“These leaders have saved us from 30 years of terrorism. That is why we respect them. But it is meaningless. They have robbed us. They have sold the whole country and built a museum at our expense to show off their parents’ clothes, ” said BM Nandavathi, a 62-year-old woman living in Balikudawa, Tangale, near the museum.

“They have looted every dollar in this country,” he said.

Dixon, a 37-year-old resident of Hambantota, agrees with Nandawathi.

“They have built this museum at the expense of the people, which they have never earned through work. They are living a luxurious life wearing expensive shoes and clothes designed and the poor of the country are suffering, they can’t even eat three meals a day, ” he said.