Headlines
Redwan Rahman graduates from FilmdomThe local government minister has instructed to cut the road if necessary to remove the waterRequest to withdraw closure shop at night till EIDThe days of the Western monolithic world are over: PutinLeaders of Germany, France, and Italy in Kyiv to express solidarity‘Presidents of two countries call and pressurized Mbappé’Two U.S. citizens are thought to be missing or taken prisoner in UkraineCOVID: The technical committee suggested lifting some restrictionsPetrol prices hit record highs in the USCanada wants a stern warning against cigarettesThe task force to protect the mountains, demanded the formation of a speedy trial tribunalDepot fire: CID tries to find the cause on CCTVRussian passports are being issued in occupied UkraineFire on Parabat Express: Railroad to Sylhet is normal after 4 hoursAnother 24 children died in Mariupol, Ukraine said
Home International “Why Modi’s picture in my vaccination certificate?”
Facebook
Twitter
WhatsApp
Print 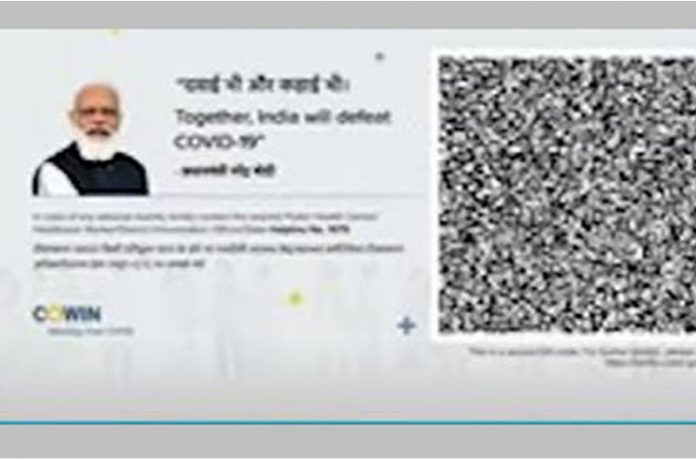 The incident took place in the southern Indian state of Kerala. A Kerala court will hear the petition of Peter M next week.

Peter wants a new vaccine certificate, which will not have a picture of Narendra Modi. Peter M., a 72-year-old Indian rights activist and member of the main opposition Congress, alleges that his fundamental rights have been violated.

He told the BBC by telephone from his home in Kwattam district: “Having a picture of him (Modi) in my certificate means he is infiltrating the private lives of citizens. It is unconstitutional. I urge the Prime Minister to stop this shameful act immediately. ”

The Covid vaccination certificate issued by the Indian Ministry of Health has two messages in English and local languages ​​along with the personal information of the citizens as well as a picture of Prime Minister Narendra Modi.

Last August, State Minister for Health Bharati Prabin Power told Parliament, “Those pictures and quotes have been added to the vaccine charter in the public interest so that people abide by the Covid rules even after vaccination.”

But Peter M argues, “Those who have already been vaccinated know the benefits. So it doesn’t make sense to give them such a message anymore. ”

Peter M was even more outraged because he had to pay to get vaccinated at a private hospital. He could not get free vaccinations from government hospitals due to long lines.

“I have paid Rs 750 for each dose of vaccine. Then why should I have a picture of Modi in my certificate? ” He asked. The Kerala High Court has given the central and state governments of India two weeks to respond to his allegations.

None of the two spokespersons of Narendra Modi’s Bharatiya Janata Party (BJP) agreed to comment to a BBC correspondent on Peter M’s petition in court.

Opposition parties have stated they will not run in the by-elections. Even some opposition-ruled states have removed the picture of Narendra Modi in the Ticker charter and given a picture of their own chief minister.

Senior Congress leader Priyanka Gandhi has alleged that Modi is using the vaccination program for personal propaganda. Meanwhile, West Bengal Chief Minister Mamata Banerjee has said, “She (Narendra Modi) should also give a picture on her death certificate.”

Asked at a press conference, Mamata said, “Suppose I am not your supporter … I don’t like you, but I have to carry it (picture). Why? Where is the freedom of man? Covid has made your picture mandatory in the certificate. Then put it in the death certificate now. ”

This picture is also becoming a problem for Indians traveling abroad. According to a recent report by Vice News, immigration officials in countries that do not know Narendra Modi have suspected that some travelers’ credentials are fake.

Peter M.’s concern is that if the matter is accepted without raising any question, it may be seen that in the future, pictures of Narendra Modi will also be included in school and college certificates.

The reason for his concern is that Modi’s picture is often seen in places that are not supposed to be there at all. For example, after a recent Supreme Court objection, an official advertisement with a picture of Narendra Modi was dropped from an official court email.

Everyone knows the interest of Prime Minister Narendra Modi in taking pictures and selfies. He has many followers on social media and millions of people attend his rallies across the country. Proponents of her case have been working to make the actual transcript of this statement available online.

Modi’s bearded face is on the streets of India and on many billboards. His smiling face can be seen in the full-page government advertisement for the newspaper. His pictures are also on the websites of the ministry.

Critics say there has never been a shortage of self-proclaimed leaders in India. In the past, the BJP has criticized the Congress party for naming hundreds of airports, universities, awards, and welfare programs after the Gandhi-Nehru family.

Former Chief Minister Mayawati, an icon of the Dalit community in Uttar Pradesh, was criticized for making her own idol. He was also accused of inciting individual worship. Former Tamil Nadu Chief Minister Jayaram Jayalalithaa also posted pictures of herself in cheap food canteens, drug stores, and salt packets.

“But Modi has taken his self-love to another level,” commented journalist and Modi’s biographer Nilanjan Mukherjee. He said, “Modi is a member of the RSS (Hindu nationalist organization Rashtriya Swayamsevak Sangha) who says the organization is bigger than the individual. But in his case, he has become more important than the organization. ”